USC / Statistics / STAT 205 / What is the location of most hip fractures?

Course: Elementary Statistics for the Biological and Life Sciences

Description: This is a summary of what will be on the next exam. Covers types of tests for statistical analysis, regression, and more. Good Luck guys :)

Types of Tests in this Section

Used tor  determine whether observed sample frequencies differ from expected  frequencies. For the chi-square test, it cannot have very small sample sizes, aka less than  5 in any cell (if it does, then use the Fisher Test).

How do you find the probability of an event given that another event has occurred?

p1 and p2 are conditional probabilities (the probability of an event, given that another has  already occurred).

When in a matrix table

When given data and

Is number of siblings categorical or numerical?

If you want to learn more check out What is a systemic response that raises the body temperature?

Used when chi-square test has very small sample sizes, aka less than 5 in any cell in the  table. It gives a confidence interval for θ (odds ratio). We also discuss several other topics like What are experimenter expectancy effects?
If you want to learn more check out Define polygenic inheritance.

Note… testing H0 : θ = 1 is the same thing as testing H0 : p1 = p2. Odds ratios are always positive and θ > 1 indicates the relative rate of success group 1 is greater than for group  2. We also discuss several other topics like What is pastiche? 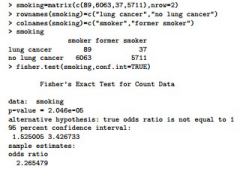 The confidence interval shows how many times higher the odds of one out come are than  another. For example, if the interval is 1.232 to 3.453… the outcome increases the odds by 1.232 to 3.453 times relative to another outcome.

The odds of one outcome are (θ insert odds ratio number here) times more than the other  outcome.

We also discuss several other topics like Is war justified when the danger of attack is remote?

To say in words use the confidence interval decimals and change them to percents We  are 95% confident that the zolendronic drug reduces hip fractures by 1.8% to 7%.

Used when  stratified table has the same odds ratio θ1 = θ2 = · · · = θk = θs. s is for  “stratified”) is the common, conditional odds ratio ex) you have data on hospital  childbirths make a conclusion to reject the ho… the second part asks now that you have  the strata of each hospital (clinic A, clinic B, clinic C) then for the second part use this test If you want to learn more check out How to find the ph of a weak acid solution?

Simpson’s Paradox: the conclusion you make from the data changes when you break  down your data into smaller groups (When we stratify, or adjust for a third variable,  association can vanish or go in the opposite direction)

The R code is: 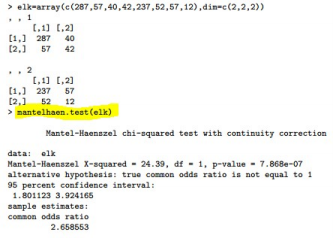 Used to  compare more than two means. It’s how variable the sample means y¯1,  y¯2, . . . , y¯I are to how variable observations are around each mean. It’s for continuous  variables.

Assumptions: Observations in each group are independently normally distributed with the  same variance.

A MEAN SQUARE (MS): the average of the squared deviations from a central value.  It is a Sum of Squares (SS) divided by the number of informative values in the SS.  called “degrees of freedom”, or df

I = number of groups

n. = number of all observations

Prospective studies start with a sample and observe them through time. For example,  clinical trials randomly allocate “smoking” and “non-smoking” treatments to experimental  units and then sees who ends up with lung cancer or not but we need to be ethical so  use… a cohort study

A cohort study follows subjects after letting them assign their own treatments (i.e.  smoking or non-smoking) and records outcomes. 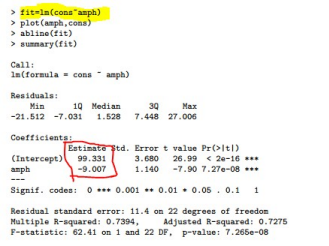 Residuals: the vertical amount the points in the scatterplot missed the regression line 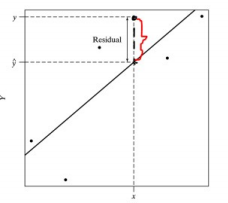 Other info on regression:

is called the multiple R-squared, and is the percentage of variability in Y  explained by X through the regression line. (variation in y explained by x)

is the sample standard deviation of the Y’s. Measures the

“total variability” in the data.

is “residual standard deviation” of the Y s. Measures  variability around the regression line

The confidence interval for β1 = The Slope

What are the favorable outcomes when rolling a die and trying to get an odd number?

How many phrenic nerves are there?