Description: Lecture notes from chapters 34 and 35: DNA Replication and Repair

∙ Why is thymine used in DNA instead of uracil?

∙ Why do you need mismatch repair and nucleotide excision repair if they are doing similar things? 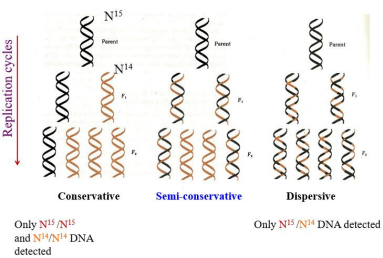 ∙ Meselson Stahl Experiment to test  o Grew bacteria in heavy N15 and light N14 o Run through Cl gradient- heavy DNA will settle at the bottom o Then they took bacteria grown in heavy nitrogen and drew them in N14 and  allowed DNA to replicate  o After 1 rounds of replication: 1 heavy strand and one light strand  o 2 rounds: 2 molecules of mixed heavy/light DNA and 2 molecules of light DNA  o Conclusion: E. coli DNA replication is semi-conservative  o He said you should be able to understand the graphical results on the following  slide: 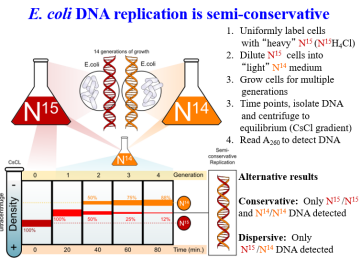 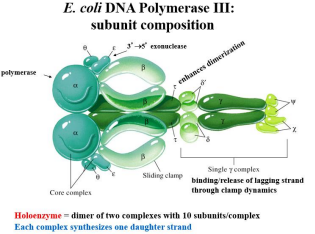 ∙ Replication occurs in the 5’ to 3’ direction even though it looks like it grows 3’ to 5’ ∙ Okazaki fragments: lagging strand is synthesized in short pieces in opposite direction of fork  mvmt, but still in the 5’ to 3’ direction. All DNA polymerases synthesize 5’ to 3’ o RNA primer is used to start the lagging strand  ▪ Primosome is complex containing primase enzyme that synthesizes short  pieces of RNA that are complimentary to one of the template DNA strands at the  replication fork  o DNA pol can’t begin without existing 3’ OH  ∙ Leading strand is made in direction of fork, beginning at origin and ending at termination site∙ Replisome = primosome + DNA polymerase 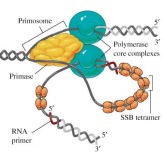 Where are Thermoregulatory Centers located?