. Other: I payed for this and it only comes up as Invalid or Corrupt PDF

Find certain mutants→ make clones→ what do the mutants affect? → where do they reside?

What is structural genetics? 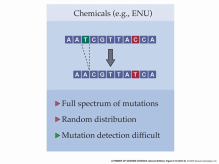 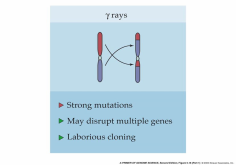 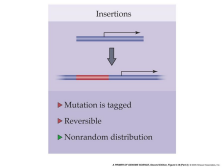 Don't forget about the age old question of danielle alessi

Lethal conditions can be compensated for if addition of needed substance added to media, certain temp or pH etc.

Modifier Screen: used to see if mutations in a second gene can modify the phenotype of the first mutation Enhancer screen- identifies second-site mutant alleles that enhance a mutant phenotype Suppressor screen- second-site mutations that suppress the first are isolated If you want to learn more check out anth 201 u of c

Due to genetic redundancy- forward genetics misses genes when reverse genetics does not.

Set of techniques for amplifying​, ​maintaining​ and manipulating​ DNA (in vitro and in vivo)

Sticky Ends- can base pair with complementary sequence 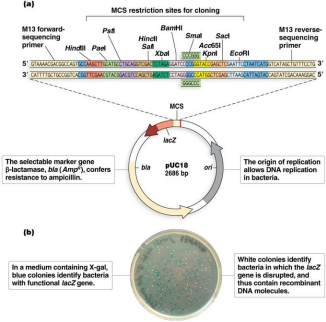 are combined to produce a ​recombinant

2. Organisms containing copies of the

3. Recombinant clone is ​amplified​ in a

Vector- carrier fragment of DNA, → Introduced into biological system where DNA is amplified

Nonrecombinant Vector- no DNA is inserted, not exhibiting the results of genetic recombination

Transgenic organism: genome which includes introduced gene(s) from other organisms

2. ​35 additional aa are removed→ generates two amino acid chains, A and B

3.​ A and B chains joined by disulfide bonds to produce insulin 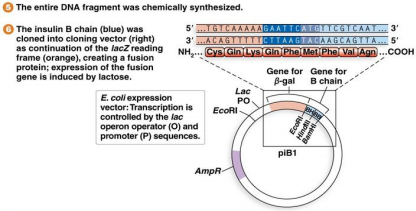 → mixture of plasmid molecules is produced (some are desired mutant)

Non-Mutant Plasmids: selectively degraded by digestion with DpnI by marking/methylating A in GATC site  → Mutant Plasmids are not methylated and therefore saved from degradation

Homologous recombination- Targeted; requires homology between the DNA and the site of insertion Illegitimate recombination: Untargeted; integrates introduced DNA into random locations of the genome

Negative Selective Marker - counter-selectable markers that eliminates or inhibits growth of the host organism, selects against non-homologous recombination which can be lethal E.g. thymidine kinase, tk, gene from a herpes simplex virus

Integration of transgene as multicopy concatemers causes gene expression to:

→ increase due to multiple copies

→ decrease due to RNA-mediated silencing effects of repetitive sequences

→ expression can vary due to chromosomal environment at gene’s location

2. DNA introduced and cells transferred to medium which selects for positive marker (against negative marker) 3. Transfected cells put back in blastocyst embryo of a different mouse

gene → expressed by the regulatory sequences

types. iPS cells- induced pluripotent stem cells directly from adult cells Fibroblast- a cell in connective tissue that produces collagen and other fibers Somatic Gene Therapy: designed to correct genetic defects in somatic cells, genetic alterations induced are passed onto daughter cells via mitosis, progeny will not inherit. Totipotent: capable of giving rise to any cell type or (of a blastomere) a complete embryo.

Concatemers: DNA strand that has multiple copies of the same DNA sequence linked in series

and then screen for mutations using PCR.

interference (RNAi) to reduce expression of the gene of

Uses knockout libraries​- collection of mutants in organism, where

most or all of the genes have been annotated

Primary role is to silence repetitive DNA: stable loss-of-function or

dsRNA or single-stranded mRNA complementary to it, and can also

Heteroduplex DNA can be distinguished by differential migration on a

gel or by different susceptibility to endonuclease digestion, not

Comprehensive: Everything accounted for, made efficient by informatics

Highly Parallel: Parallel testing, millions of computational tests all at the same time

Structural Genetics- ​sequencing of genomes and cataloging them

resulting sequence assembled into contigs based on sequence

within the genome sequence

Variation in Repetitive DNA- Interferes with genome assembly; consists of

Functional Genetics​- ​study of gene function from a whole-genome perspective

DNA Microarrays​-​Consist of collections of DNA fragments that act as probes which detect transcript complementary sequences, ​tests the amount of expression, where and when the gene is expressed. Cy3 is a GFP tagged to cDNA strand. Green: underexpression, Red: over expression (See on last page of review)

Proteomics:​ the study of proteomes and their functions

interaction (must be like puzzle pieces), see molecular cloning figure,

→ interacting proteins are not efficiently transported into nucleus

related function which govern gene expression levels of mRNAs and

proteins → Two genes act in the same or redundant pathways→

Identification of gene interactions can provide clues to gene function →

Most proteins needed for mtDNA replication, transcription, and translation are encoded by nuclear genes→ product transported to mitochondria

mtDNA is ​not​ packaged in chromatin, ​genome anchored to inner mitochondrial membrane

-mtDNA transcribed by RNA polymerase (like bacteria), encoded by mitochondrial gene and nuclear in others -Mitochondrial transcriptional regulation varies among species, reminiscent of bacterial operons -Ribosomes!

-Mitochondrial genes encode rRNAs but ribosomal proteins may be encoded for in nuclear or mitochondrial genes. Shine-Dalgarno sequences found upstream of protein-coding genes (bacterial)→ not usually the case

3. Sizes, numbers, and identity of genes in organelles differ among species

Mitochondria and Chloroplasts are uniparental and of maternal origin

-In some species, cytoplasmic organelles are contributed bi-parentally.

→ allows for genome to become homogenized

*Chloroplasts​ usually do not undergo fusion

1. Growth, division, and segregation of the organelles themselves

2. Nucleoid division and segregation in the organelle

Nucleoid: area where protein-DNA complexes are made from packaged organelle DNA

1. Maternal inheritance of organelles in mammals and flowering plants

2. Paternal inheritance of alleles in gymnosperms

1. Predictions of inheritance of mitochondrial mutations based on maternal genotype only 2. Allows for specific examination of maternal lineage, helps determine migration and evolution 3. Phylogenetic trees constructed from mitochondrial DNA sequences only consider the maternal history of the species, no paternal contribution→ no allele recombination

Recent African origin (RAO) model​: 120,000-200,000 years ago modern humans evolved from a small African population that migrated out of Africa, displacing other species. More genetic diversity should be observed in the oldest populations in Africa.

African populations are most diverse and diversity elsewhere is based on a subset of African alleles. Estimate minimum divergence time of humans: ~ 200,000 years