Description: Here is a helpful study guide to Exam 4. Good luck on the exam!

Fall 0123 CELL CYCLE AND MITOSIS 1. Why do cells reproduce? Cells reproduce for organismal development, create a new organism or for  cellular maintenance and repair. 2. What is binary fission? A type of asexual cell division involving prokaryotic cells.  3. What is the eukaryotic cell cycle? The Eukaryotic cycle is an ordered sequence of events that extends  from the instant a cell is first formed from a dividing parent cell until its own division into two cells  consisting of three stages: Interphase, Mitosis & Cytokinesis. 4. What happens to DNA as the cell progresses through the cell cycle? It is in its loose chromatin form in  interphase, condenses in prophase at the start of mitosis and it loosens back up in telophase once daughter cells have been produced.  5. What exactly is “mitosis”? Distinguish between karyokinesis (mitosis) and cytokinesis. Mitosis divides  the nucleus 6. What is a chromosome? What macromolecules are present in a chromosome? Distinguish between  chromatin, chromosomes and chromatids. Draw and label a replicated chromosome. Macromolecules  that are present in a chromosome are proteins, nucleic acid.  REGULATION OF THE CELL CYCLE 7. What is a cell cycle checkpoint? Describe the major checkpoints in the cycle, and label them on your  mitotic cell cycle diagram. A cell cycle checkpoint is a critical point where stop and go signals regulate the cycle. The major checkpoints in the cycle are during the G1 and G2 sub-phases of interphase and  in the M phase.  8. Describe quiescence, and give some examples of quiescent cells in your body. Quiescence is the G0  phase that occurs when a signal never arrives to signal the cell to divide, putting it in a permanent non dividing state. Some examples of quiescent cells are Mature nerve and heart muscle cells. 9. What cellular senescence? Cellular senescence is the irreversible loss of the ability to divide—cells  cease to divide. Associated with aging.  10. What is apoptosis, and why might it occur? Apoptosis is programed cell death or cell suicide. It may  occur as a response to DNA damage in cells. 11. What happens if the cell cycle is NOT properly controlled? If a cell cycle is not properly controlled, it can  bring on the onset of cancer. 12. What are proto-oncogenes and tumor suppressor genes (what is their normal function)? How are these  genes and their function altered in cancer cells? Proto-oncogenes are normal genes that have the  potential to become cancerous or oncogenes. Tumor suppressor genes are genes whose normal  products inhibit cell division. In cancer cells, gene mutations in genes cause the onset of cancer.  Mutations that decrease normal activity of a tumor-suppresser protein may contribute to the  development of cancer.1 UNIT 4 STUDY QUESTIONS

Why do cells reproduce? 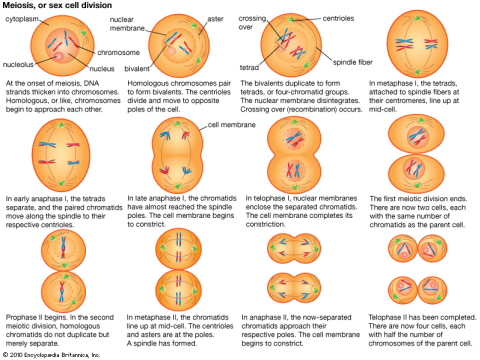 21. Complete a meiosis diagram (blank diagram on BBD) to illustrate the major events that occur in each stage of meiosis, focus on events that contribute to the distribution of the cell’s DNA to the daughter  cells. 22. What is a tetrad? Why is it so central to meiotic division? Do tetrads also occur in mitosis? A tetrad is  four chromosomes during meiosis made by two homologous chromosomes that have each already  replicated into a pair of sister chromatids. Tetrads do not occur in mitosis. 23. How does meiosis differ from mitosis? Are there any similarities? If yes, explain.   Mitosis Meiosis I Meiosis II Prophase Each duplicated  chromosome  remain separate Chromosomes are  associated with  their homologous  pair Nuclear  membrane  breaks down Metaphase Duplicated  chromosomes line  up singly Duplicated  homologous Chromosomes  line up in a  single file

What is binary fission?

We also discuss several other topics like in anterograde amnesia ______

What is the eukaryotic cell cycle?

Fall 0123 Change in the nucleotide  sequence in a particular gene Includes Deletions Change in several genes in the  chromosome Small-scale alteration Includes Duplications Considered large-scale alteration Can sometimes be corrected Hardly corrected Slight structural alteration Numerical or structural changes in  entire DNA strand MENDELIAN GENETICS 28. Define distinguish between the terms: “dominant” and “recessive”, “phenotype” and “genotype”,  “gene” and “allele”, and “homozygous genotype” and “heterozygous genotype”.   Dominant Recessive Phenotype Genotype Gene Allele Homozygous Heterozygous Allele  expressed  that masks  the effect of  the  recessive  characteristic Allele  masked  by A  when  present Physical  expression  of alleles Combination  of alleles  that cause  the  expression  of a  particular  trait or  disorder A  segment  of DNA  that  codes  for a  protein Alternate  form of a  gene (A  or a) Having two  identical  alleles of a  gene Having two  different  alleles of a  gene

29. Distinguish between monohybrid and dihybrid crosses. What is a test cross? Monohybrid cross Dihybrid chross Cross between first generation  offspring of parents who differ in  one trait Cross between first generation  off spring of parents who differ  in two traits Useful in determining the  dominance of genes Useful in studying the  assortment of the offspring 30. What question was Mendel asking in his monohybrid crosses? How many characterisitics inherited? 31. Diagram out Mendel’s monohybrid cross between a purple-flowered pea plant and a white-flowered pea  plant. What are the F1 and the F2 genotypic ratios? 5 UNIT 4 STUDY QUESTIONS

Fall 0123 32. State and briefly explain Mendel’s two Laws of Genetics. What is the physical basis of each in terms of  events in Meiosis? The Law of Segregation states that there are two alleles for each trait that reside on  homologous chromosomes and that each offspring gets 1 allele from each parent. The Law of  Independent Assortment states that pairs of alleles on different chromosomes assort independently of  each other during meiosis.  INHERITANCE PATTERNS 33. Distinguish between complete dominance, incomplete dominance, and codominance. Provide  examples of each in humans. Complete Dominance Incomplete Dominance Codominance Definition Dominant allele  completely masks  recessive allele Dominant allele doesn’t  fully mask recessive  allele Neither allele masks  the other Genotype/Phenotype Heterozygous  genotype shows as a  dominant phenotype Heterozygous genotype  shows as a “blended”  phenotype Heterozygous  genotype displays  both phenotypes;  additive phenotype 34. Be able to complete genetics problems for each of the above inheritance patterns in addition to Sex linked inheritance. Be able to calculate the genotypic and phenotypic frequencies of the offspring. Genotypic ratios are ratios that include each member of the Punnett square offspring. If there are 2 of  the same offspring, then note that in the genotypic ratio. The phenotypic ratio expresses phenotypical  characteristics. If all are the same, you put it as “[percentage] characterstic”. If they are Sex-linked  alleles, then you must split the phenotypic ratios so that one references female gametes, and the other  references male gametes.  35. Be able to read and interpret a pedigree. 36. How is gender determined in humans? It is determined by the male. 37. Why do human diseases that are controlled by genes carried on the X chromosome occur at a higher  frequency in males than in females? Human diseases controlled by genes on the X chromosome  occurs at a higher frequency in males than females because with males, they only have one X  chromosome while females have two. Females can be a carrier of a disease and not have it while a  male can either have it or not have it. So the chances of a male being affected is at a much higher  chance. 6 UNIT 4 STUDY QUESTIONS