12 Pages 117 Views 1 Unlocks
Reviews
Start of Exam 4: skeletal and smooth muscles Thursday, October 13, 2016 10:53 AM • Optimal length of the sarcomere that produces best contraction- max overlap between thick and thin filaments  • More about the patient: high levels of anti-acetylcholine-receptor antibodies  ○ Her symptoms disappeared when she was given a drug that prevented breakdown of acetylcholine (Achetylcholinesterase inhibitor) ○ Results tell you anti-acetylcholine antibodies are binding to receptors, so the Ach is not able to bind to the receptor. Receptors are blocked by a ntibodies, but if we give  her a drug that makes more Ach, it makes it more likely that Ach will bind to receptors that aren't occupied by antibodies so her neurons will now work.  ○ She has myasthenia gravis, an autoimmune disorder where antibodies are formed against Ach receptors in body.  • What tells the myofibril to shorten? ○ Electrical impulse from a neuron (nerve cell in the CNS) ○ Neuron communicates with muscle fiber chemically, and chemical signal is converted to electrical signal  ○ Signal in muscle fiber causes Ca2+ to release from sarcoplasmic reticulum  Electrical signal (at neuron) --> chemical signal (between neuron and muscle fiber) --> electrical impulse (at muscle) Neuromuscular Junction  • Point of communication between the neuron and muscle fiber (between neuron and muscular system) • Electrical signal to chemical signal to electrical signal 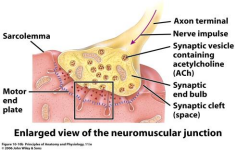 • When acetylcholine binds to receptors in motor end plate opens sodium channel in muscle cell: generates electrical signal because  charges are changing  • Generates electrical signal (Action potential) in the motor neuron. Acetylcholine is released and diffuses across synaptic cleft from  motor neuron to motor end plate. It bind opens an ion channel that generates electrical signal at the muscle cell  • Each muscle fiber has a single synaptic terminal  The resting cell  • Transmembrane potential of a cell at rest: inside is slightly negative compared to outside due to sodium-potassium pump  • Separation of charge across a membrane in an excitable cell at rest  • Lots of sodium and chloride outside cell. Lots of phosphate, proteins, and potassium inside  • -70mV charge inside cell. Muscle cell is more like -95mV Action potential  • Electrical signal produced by ion movements across the plasma membrane of excitable tissues  • Nervous tissue and muscular tissue  • Openstax pg 537  Anatomy 1 Page 1

Opening of Na channels. Sodium moves into the cell b/c it's moving down  its gradient by diffusion. K channels are closed. Channels respond to changes in voltage. Once we hit +30mV (inside of cell  is slightly more positive) then the sodium channels close and potassium  channels open. K moves out because there's more K inside the cell so it  moves down its concentration gradient. Repolarization continues and K  outflow re-establishes resting membrane potential. Na channel  inactivation gates open. Return to resting state when K gates closes Repolarization continues: K 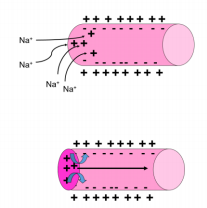 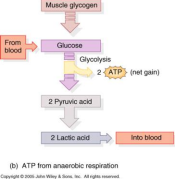 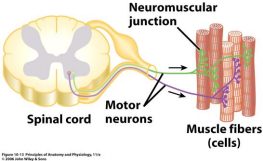 Tension increases to an optimal level (contraction period- sliding filaments) then  decreases (relaxation period- crossbridges detach)  Latent period: no contraction right away because the signals transferring in the sarcomere  takes time. Calcium-troponin…etc.  Every time we stimulate the muscle, we will get the repeating pattern of  latent/contraction/relaxation Muscle contraction stops when 1) Ach is broken down by acetylcholinesterase in the synaptic cleft  2) Ca is sent back to sarcoplasmic reticulum  3) • What happens when muscle fibers are stimulated frequently? • Contraction responds to changes  • Ca in the sarcoplasm  • Shortened elastic elements  More forceful contractions when the muscles are stimulated  more frequently b/c the calcium and components are already  in the vicinity and ready. Already primed. By inc. amt of   Anatomy 1 Page 4 Active sites on actin are occluded by tropomyosin, crossbridge formation is inhibited,  filaments do not slide  More forceful contractions when the muscles are stimulated

Na would constantly go in cell: constant depolarization What would happen if a neuron suddenly became permeable to K+?

What would happen if a neuron suddenly became permeable to Na+?

• What tells the myofibril to shorten?

• Intermediate filaments form a network throughout  entire muscle fiber Dense bodies anchor the thin filaments and the  intermediate filaments Ca2+ flows into sarcoplasm from extracellular fluid,  some comes from the SR Shortens and twists a little to give you strong contraction in multiple dimensions Contractions are much longer and slower than skeletal muscle fibers  Uses much less ATP  Compare and contrast contraction steps for skeletal and smooth  • Smooth muscle contraction  ○ Ca flows into sarcoplasm from extracellular fluid  Ca2+ ○ binds to calmodulin  Anatomy 1 Page 7 ○ Calmodulin activates myosin light chain kinase ○ MLCK breaks down ATP and initiates contraction ○ Much slower than skeletal muscle Quiz: What happens to contraction if smooth muscle is placed in a bath from which all Ca has been removed? Either no contraction or  small one because there may be a little bit in the SR since most calcium comes from ECF How does binding site for Ca differ in skeletal and smooth? Binds to troponin in skeletal, calmodulin in smooth  Confusing test questions: hyperpolarization, z disk vs m line, length of muscle contraction before tension,  eyeball, muscle contraction on graph,   Anatomy 1 Page 8 Nervous tissue Thursday, October 27, 2016 11:07 AM • Functions of the nervous system  ○ Sensory: receptors monitor changes in the environment; gathered information is called sensory output  ○ Integration: Processes and interprets information and decides what should be done ○ Motor: activates a response by activating effectors  Independent but still responds to  changes in the CNS Sensory (Afferent) info goes into CNS Motor (efferent) leaves CNS to bring response • Which subdivisions of the PNS are responsible for  ○ Relaying sensation of a full stomach: enteric. afferent (sensory) ○ Contracting muscles to lift your arm: somatic efferent (motor) ○ Increasing your heart rate: autonomic efferent (motor) CNS PNS • Astrocytes Satellite cells  • Oligodendrocytes Schwann cells  • Microglia  Anatomy 1 Page 1 Somatic: Effectors are skeletal muscle  Autonomic: Effectors are glands or organs Enteric nervous system  • Microglia • Ependymal cells  Prevents substances from leaving  blood and going to brain. Part of  blood-brain barrier. Wrapped  around blood vessels. Also give  structural support. Most prevalent Least prevalent, phagocytes Wrap around myelin for insulation and myelination Line the ventricles, make CSF for cushioning Oligodendrocytes can form multiple projections between different dendrites but satellite cells are just individually  located. Satellite cells cover ganglia and provide protection Myelin sheath is formed  from layers of plasma  membranes of the  Schwann cells- very good  insulator  • Cell bodies and unmyelinated axons in gray matter, myelinated axons in white matter • When cell bodies clump together, we call them nuclei or ganglia  Resting Membrane Potential  • Transmembrane potential of a cell at rest  • Separation of charges across a membrane in an excitable cell at rest  Types of channels  Unmyelinated • Ligand-gated channels: respond to ligands that bind them: Ach binds to ligand gated Na channel at motor end plate  • Voltage gated channels: respond to electrical changes in plasma membrane  • Mechanically gated channels: responds to mechanical stimulus  • Leak channels: channels are mostly always open, ions leak in and out  Graded Potential  • Change in potential is proportional to size of stimulus- smaller stimulus, smaller potential.   Anatomy 1 Page 2 Depolarizing: Na going into cell Hyperpolarizing: all the K leaves cell and inside is more negative • Action Potential  More likely to generate action potential  negative ion enters cell  • Changes in membrane potential that affect an entire excitable membrane • “All-or-None” – the action potential is triggered completely or not at all • Leads to neurotransmitter release that then leads to another action potential  • Graded potentials are in dendrites, action potentials are in axons.  Depolarizing Repolarizing  Dep. Graded potential that  Green and pink- ABSOLUTE refractory. There cannot be another  action potential- the neuron cannot respond to another  stimulus  Orange: RELATIVE refractory period. Neuron may be able to  respond to another stimulus if it is strong enough  Threshold Resting membrane potential  leads to action potential  once we reach -55mV  threshold  action potential is generated Entire unmyelinated axon membrane depolarizes  After hyperpolarizing too much K leaves cell b/c channels are slow to open  Depolarization/repolarizat ion only occurs at Nodes Travels much faster  due to myelination! Only select regions of the membrane are  depolarizing, so the NaK ATPase has to do less  work  • Question: how would a drug that blocks Na channels in the neuron plasma membrane affect cell's ability to depolarize?  Unable to depolarize  • What effect on resting membrane potential do you expect to see if the extracellular concentration of K decreases?   Anatomy 1 Page 3 • What effect on resting membrane potential do you expect to see if the extracellular concentration of K decreases?  K could leave cell to ECF because it would be moving down its concentration gradient through the leak channels  • If you put ouabain, an agent that inhibits Na/K ATPase, on a neuron, and the stimulate the neuron repeatedly, what do you  expect to happen to the action potentials generated by that neuron?  You would have a lot of sodium into cell if you couldn’t pump it out through pump. It rushed in during depolarization. You  can't keep generating action potentials b/c you will dissipate the electrochemical gradient: Diminish over time and  eventually disappear   Anatomy 1 Page 4
Page Expired