PSU / Engineering / CS 250 / What is the meaning of adjacent nodes?

A graph is a pair (V, E), where V is a set of elements called vertices, nodes, or points  and E is a set of pairs of vertices called edges or arcs.

Edges can be directed or undirected. Don't forget about the age old question of What is the purpose of the treasury dept in the federal government? 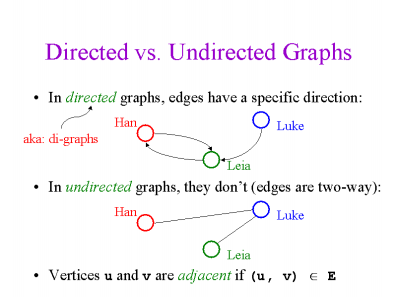 What is the meaning of isolated vertex?

Edges can be weighted. 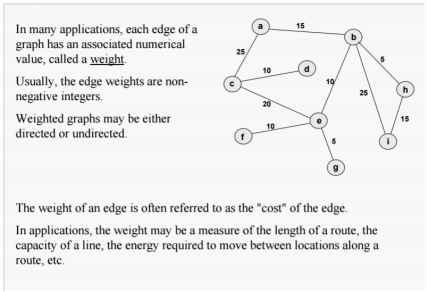 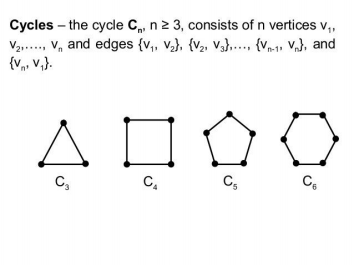 Don't forget about the age old question of What is the meaning of pareto improvement in economics?

What is the meaning of the adjacency matrix?

Initial and terminal node of an edge

A digraph (or a directed graph) is a graph in which the edges are directed. (Formally:  a digraph is a (usually finite) set of vertices V and set of ordered pairs (a,b) (where a,  b are in V) called edges. The vertex a is the initial vertex of the edge  and b the terminal vertex. We also discuss several other topics like What is the formula of derivatives?

Edge incident to and from a node 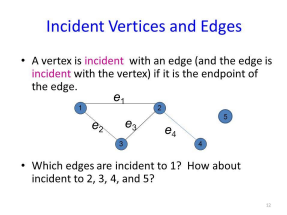 A vertex with degree zero is called an isolated vertex.

By using degree of a vertex, we have a two special types of vertices. A vertex  with degree one is called a pendent vertex.

Don't forget about the age old question of Which manner of articulation refers to the restriction of airflow in the oral cavity thus causing turbulence and noise? 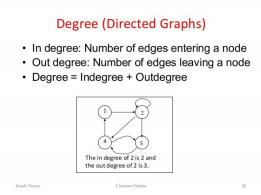 Don't forget about the age old question of Who is shot and killed by mark chapman in 1980?

In graph theory and computer science, an adjacency matrix is a square matrix used to  represent a finite graph. The elements of the matrix indicate whether pairs of vertices are  adjacent or not in the graph. In the special case of a finite simple graph, the adjacency  matrix is a (0,1)-matrix with zeros on its diagonal.We also discuss several other topics like What was the observed sample mean breaking strength for the 49 randomly selected bags?

In mathematics, an incidence matrix is a matrixthat shows the relationship between two  classes of objects. If the first class is X and the second is Y, the matrix has one row for each  element of X and one column for each element of Y.

In graph theory and computer science, an adjacency list is a collection of unordered lists used  to represent a finite graph. Each list describes the set of neighbors of a vertex in the graph.

Path: a sequence of nodes (edges) that begins at a vertex and travels from vertex to  vertex along edges of the graph 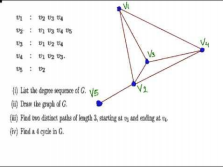 Circuit: a trail which starts and ends at the same vertex 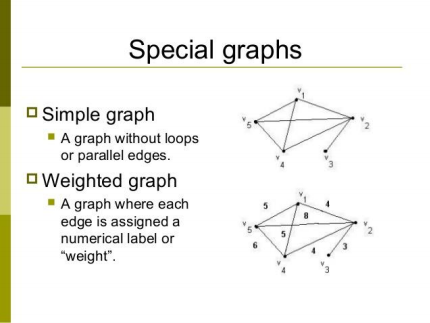 Connected graph: when there is a path between every pair of vertices (nodes) 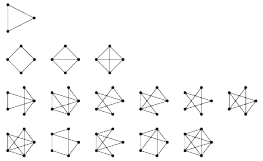 Binary relations: A directed graph defines a binary relation on a set of vice versa.  Properties are easier to see on a graph and closures easier to compute.

Depth-first: go as far as possible, come back to last choice, take another path  RESULT: ABDFECG

Definition: A node is a question, an edge is an answer. Leafs are the outcomes.

Maps characters to bit strings so that more frequent characters are mapped to shorter  strings.

The idea is to assign variable-length codes to input characters, lengths of the assigned  codes are based on the frequencies of corresponding characters.

Polish notation: Way of expressing arithmetic expressions that avoids the use of  brackets to define priorities for evaluation of operators.

Preorder: Visit the root, traverse to the left subtree, traverse the right subtree

Inorder (only for binary): Traverse the left subtree, visit the root, traverse the right  subtree

Trees: A tree is a mathematical structure that can be viewed as either a graph or as  a data structure. The two views are equivalent, since a tree data structure contains not  only a set of elements, but also connections between elements, giving a tree graph.

Binary tree: a data structure in which a record is linked to two successor records,  usually referred to as the left branch when greater and the right when less than the  previous record.

Cantor Diagonalization: Cantor diagonal argument is an argument to prove that set  of real numbers is uncountable.

What is a countable set? Let's say a set is countable if we can start ordering the elements of a  set like the first, the second and so on. Formally we have to find a bijection with natural  numbers.

So here are the steps:

Step 1: Assume that the set is countable. This means that the set of real numbers can be  written as a set with first element, second element and so on, which

Step 2: One way to show that the assumption of step 2 is not possible is to find a real  number which is not counted there. How? By Cantor diagonal argument. Suppose that we are going to consider only numbers between 0 and 1. Then the new number  is such that it is different from the first number at the first digit, from the second element at  the second digit and so on. For instance look at the following:

Permutation: An argument of k objects from a set of n.

Permutation is all possible ways of doing something without any repetitions.

Probability Function: S is a set called space whose elements are called points. A subset E of S is called an event.

I’d recommend going through these videos to help you understand the topics better: https://www.youtube.com/watch?v=aqTzHOvabYM

*NOTE: THE MOST HELPFUL thing is to see the tutors.

What is the meaning of society in sociology?

What are the 4 mechanisms of evolution?