when we say that economic fluctuations are “irregular and unpredictabl

when we say that economic fluctuations are “irregular and unpredictabl

Description: This set of notes covers all of Chapter 20 and most of Chapter 21. The rest of Chapter 21 will be covered this coming week once it is completed in class. These notes incorporate the textbook, lecture slides as well as what is verbally said in lecture.

what might cause a shift in the LR vertical supply curve?

then what would cause the curve to SHIFT?

why does it slope downward?

Macroeconomics Notes November 29th, 2016 Chapter 20  Economic Fluctuations   Aggregative Demand (AD) and Aggregate Supply (AS) the Model of AD and AS  vertical Line in the Trend Line NOTE: this chapter focuses mainly on SHORT RUN fluctuations  Three Key Facts About Economic Fluctuations (in the short run) 1.Fluctuations are Irregular anIf you want to learn more check out where are the general senses located?
We also discuss several other topics like produces a lubricating mucus that cleanses the urethra
Don't forget about the age old question of karen peterson uw
We also discuss several other topics like ensonhs
We also discuss several other topics like hacs themes
If you want to learn more check out cost-benefit analysis is a device used to determine whether it's worthwhile to incur a particular cost.
d Unpredictable 2.Most Macroeconomic Quantities Fluctuate Together —doesn’t matter if you look at income, spending, etc because they fluctuate  closely together but at different amount  3. As output falls, unemployment rises —when firms choose to produce a smaller quantity of goods and services,  they lay off workers  The Model of Aggregate Demand and Aggregate Supply  —the first variable is the economy’s output pf goods and services —the second variable is the average level of prices (as measured by CPI or  the GDP deflator) —output=real variable

—price level=nominal variable  —the aggregate demand (AD) shows  how much of a good or service  consumers will want at the various  price levels —the aggregate supply (AS) shows how much of a good or service companies  are willing to sell at various prices —price levels ad the quantity of output adjust to make sure AS come to an  equilibrium Aggregate Demand Curve —other things equal, a decrease in overall prices in the economy raises the  quantity of goods and services demanded (and more output! Y) why does it slope downward? think about…The Wealth Effect —when the price level falls, the money you have rises in value and therefore  increases real wealth ad ability to buy goods and services  ex. an ice cream cone was $1, and you could only buy 1 cone,  then the price of a cone drops to 50 cents, now you can buy two; you have  more purchasing power  —consumers are then encouraged to spend more, meaning they will demand  more of a good or service because their dollar goes farther  —the least important of the three effects The Interest Rate Effect —when price levels decrease, some households may want to lend some of it  out in the form of purchasing interest-bearing bonds  —they may also deposit into a savings account  —this then drives down interest rates —in return, lower interest rates encourage companies and households to  invest more in equipment, housing, etc —lower interest rates may also encourage more consumer spending and  therefore increases the quantity of goods and services demanded  —*as people try to lend out their excess money holdings, the interest rate  falls* —the most important reason for downward slop of the AD curve  The Price Level and Net Exports: The Exchange Rate Effect —when a fall in the U.S. price levels occurs and causes interest rates to fall,  the real value of the dollar declines in foreign exchange markets, meaning you can’t buy as much international goods/services with the dollar —consumers then steer away from the international market and buy more  things within the country, therefore a decrease in imports  —a fall in the real exchange value of the dollar leads to an increase in the  quantity of goods and services demanded  NOTE: the same three effects work in reverse!!! NOTE: keep in mind other things equal!!! then what would cause the curve to SHIFT?? Changes in Consumption ex. let’s say people are more concerned about their futures, and so decide to  save more for retirement…they demand less goods and services and so the curve  shifts left  ex2. let’s say there’s a stock market boom; people become wealthier and are  less concerned about saving and therefore a greater demand for goods and  services…the curve shifts left  —tax cuts, shift to the right —tax increases, shift to the left  Shifts Arising from Changes is Investment  —if firms are pessimistic about the future business conditions, they may cut  back on investment, therefore a curve shift to the left (and vice versa)  —an increase in money supply lowers the interest rate in the SR and this  encouraged firms to invest and spend more, shifting the curve to the right (if a  decrease in money supply, curve shifts left)  Shifts Arising from Changes in Government Purchases—if government reduces purchases the curve will shift to the left —if the government increases purchases (like investing in highways) then the curve will shift to the right  Shifts Arising from Changes in Net Exports —if foreign countries enter tough times and consequently purchase less  (decrease in net exports) then the curve will shift to the left —when recovering from recessions, buy more US goods and the curve shifts  to the right  —depreciation of the dollar in foreign markets makes it more attractive to buy US goods, and so the curve shifts right  —increased value of the dollar in foreign exchange market shifts the curve to  the left  Aggregate Supply Curve —in the SR, it is an upward slope (as opposed to LR, vertical)  —tells us the total quantity of goods and services that firms are willing to  produce and sell at a given price level NOTE: in order to understand short run fluctuations and why SR and LR curves are  different, we have to look at BOTH LR and SR aggregate supply curves LR supply curve —it is vertical because price level does not affect long run determinants  -the economy’s labor,  capital, natural resources and  technology determine the total quantity  of goods and services supplied and this  quantity is the same regardless of what  the price level is

what might cause a shift in the LR vertical supply curve?? —any change that alters the natural level of output (production when  unemployment rate is normal) in the economy will shift the long run (LR) aggregate  supply curve  -output depends on 1. labor, 2. capital, 3. natural resources and 4.  technological knowledge  Shifts in Labor —vertical shift at the natural rate of output  —Yp determined by -A(tech)F(L,K,HK,NR) -if P level rises, then none of these variables are effected —also known as “Classical Dichotomy”  -nominal variable P doesn't affect K, etc… -two separate things  HOWEVER, if the vertical line SHIFTS (rather than go up and down the vertical line) , then that means that L,K,HK and/or NR changed ex. an increase in immigration  Shifts in Capital —an increase in capital stock increases productivity and the curve shifts to  the right  Shifts in Natural Resources —a new discovery of minerals with shift the curve to the right Shifts in Technological Knowledge  —technological advancements or opening up international trade will shift the  curve to the right  why is the SRAS curve upward and not vertical?? —in the short run, the price level DOES affect the economy’s output  -over a period of one or two years, an increase in overall price levels  tend to raise the quantity of goods and services supplied -a decrease in overall prices lower the quantity of goods and services  supplied Three Theories of AD and AS  (and this helps explain why the SR aggregate supply curve is upward)  vertical line is the trend line  Three Theories or Models of SRAs Y=Yp+a(P-Pe) when P>Pe, then Y>Yp when P<Pe, then Y<Yp when P=Pe(when there’s no price surprise), then Y=Yp sticky wage —short-run supply curve slopes upward because nominal wages are slow to  adjust to changing economic conditions  —workers and firms agree to a labor contract and nominal wage  —this agreement is in accordance with what the workers expect prices to be  —when P is higher than expected, or when it increases, then more profit  sticky price —it emphasizes that the prices of some goods an services adjust  sluggishly/slowly in response to changing economic conditions  -this is in part because of “menu costs”: the costs to adjust prices (like  printing and distributing it takes time) —if there is an increase in demand, then sticky prices —no price change and they increase the quantity they supply  misconception  —firms make mistakes—they may think that an increase in prices=an increase in demand, but it  could just be inflation that causes those higher prices —when price is above what firm expect, they split the difference Shift in SRAS Curve: Y=Yp… —if price is higher than expected, some labor contracts could be expiring and the new ones will incorporate a new, higher expected price  —sticky wages best apply to this/describe this —SRAs could also if output (Y) changes  LRAs Curve  AS (aggregate supply) curve: Y=Yp+a(P-Pe), a>0  -upward slope of SRAs due to mistaken expectations  in the LONG RUN —mistakes are corrected i in the SHORT RUN  —expected prices don't have to be right  LR Equilibrium  start@LRE Pe=P Y=Yp U=Un AD-SRAS-LRAS Model  —we use this to explain how negative shocks affect stock prices and housing  prices  Recall: 0 Net Worth=Bankrupt  How to incorporate stock market wealth effect:  —when stock P decreases, people feel poorer and this leads to a decrease in  consumption  —about 33% of stock market was destroyed 2007-2008  —there is also good evidence indicating that consumption decreases about 3  or 4 cents (%) for every $1 lost in the stock market’s wealth  Collapse in US Housing Prices —equity markets were accurately predicting the downturn of the economy —25% of housing wealth was destroyed during the crisis and losses  amounted to about $5 trillion  —consumption fell by about 5/6% for every $1 lost -consumption decreased by about $250-$300 billion a year  Consumption Shortfall during Crisis Consumption decreased $400 billion to $500 billion a year  Consumption decreased about 2.7-3.3% a year NOTE: this is enough to cause a great recession SLIDE: The Effects of a Shift in AD  —there’s one shift and two movements 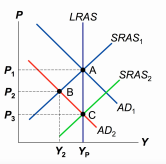 —there wasn't much of an increase in lending -banks were afraid  A—>B -P level is falling*this is a key salient feature of a recession  LR Adjustment  —what if policy makers do nothing?? @AB, output is below potential output  when Pe decreases, output increases and starts returning to potential  —continued P adjustment until P and C

dendrites in a neuron send outgoing signals to other cells