elaborate rules regarding food and drink for followers of hinduism are

elaborate rules regarding food and drink for followers of hinduism are

What food is most frequently prohibited?

Elaborate rules regarding food and drink for followers of Hinduism are meant to do what?

What results from violating the laws of health for the Adventists?

1. Fastest growing ethnic group- Latinos 2. True concerning changing demographics: Mix of ethnic origins is shifting,  population is getting older 3. Culture- belief, attitudes, values, and practices of a community of individuals 4. The need for humans to experimenWe also discuss several other topics like suppose that there are diminishing returns to capital
Don't forget about the age old question of uc davis bis 2a
Don't forget about the age old question of 2030 study guide
We also discuss several other topics like eoas fsu
If you want to learn more check out what distinguishes strong acids from weak acids
We also discuss several other topics like phys 101 formula sheet
t with food choices but at the same time, be  conservative (that’s why we go through assimilation): omnivore’s paradox 5. Taste, well being, convenience- affect consumer food choice model 6. Which habits are the least likely to change? Food habits 7. Foods that are eaten sporadically and are an indicator of individual food habits peripheral foods 8. All of the above are measures of acculturation 9. The term stir-fry replaced melting pot, flavor principles are preparation and  seasoning of food 10. Americans believe in personal control over fate 11. Iceburg: much of what affects communication is unseen and not readily apparent 12. High context culture: indirect communication preferred, nonverbal cues are  significant 13. In CRASH, S= sensitive 14. Method used that is culturally sensitive- respondent driven interview 15. Kosher meal plan is not part of the efforts at the UGA dining hall 16. Religion related food habits are the least variable of culturally based foods –NOT  TRUE 17. First 5 books of Hebrew bible- torah 18. Most Jews are Ashkenazi 19. Kashrut is dietary laws for Judaism 20. Blood from any animal isn’t allowed in Judaism 21. Two examples of specific religious guidelines about how to slaughter meat kosher and halal 22. Easter is not a fast day 23. In Greece, eggs are dyed red 24. Most Mormons are in Utah 25. What results from violating the laws of health for the Adventists? Sickness  26. Not one of the 5 pillars of Islam- self-indulgence 27. Haram foods are unlawful or prohibited 28. Month of fasting- Ramadan 29. Elaborate rules regarding food and drink for followers of Hinduism are meant to  do what? Lead to purity of mind and spirit, not religious freedom 30. In India, fasting practices vary according to caste and family, degree of  orthodoxy, age and sex. 31. What food is most frequently prohibited? Meat (meat taboo) 32. It’s NOT TRUE that the rule of non-violence (ahimsa) doesn’t extend to animals 33. True- religions evolved within a culture, they have health and dietary rules, and  they’re associated with overall health status 34. NOT TRUE_ non-kosher ingredients are not allowed in diet as well as medicine 35. NOT TRUE- diabetes mellitus prevalence is low in India because vegetarianism is  widely practicedPopulation in general- food ways  Individual’s choices- food habits Kosher foods are: meat, dairy, and pareve The U symbol means kosher The M means Halal When a smaller group, a minority, moves into a larger dominant culture, the process  in which the minority group fully merges- assimilation; the process leading to  assimilation is acculturation Halal is in the Quran (Koran) 6 driving forces: demographics, government programs, women in the workplace,  new technologies, nutrition science, and media (preferred sources shift from books  and magazines to television, internet) Marvin Harris said: Certain animals benefit the community more alive than dead An animal competes with people for food An animal is inappropriate to raise in a regionFinal: MLC 101 December 12th 8 AM- 11AM 200 points Includes all materials taught in the semester Materials before exam: only from the Exam (about 35% of Final Exam) (If she didn’t  ask about it on Exam 1, it wont be on the final) Materials after Exam 1: all lacture materials Multiple choice and T/F: 53 questions (3 points each) Short Answers: 8 questions (5-6 points each) Dec 7. Accumulative points will be on ELC Dec 13th: Final grade will be on elc By Friday Dec 16th: Final grade check; appointment by email required  Introduction, Religion, Region ???? 3 parts of course The table of the summary of religious food ways is on the exam 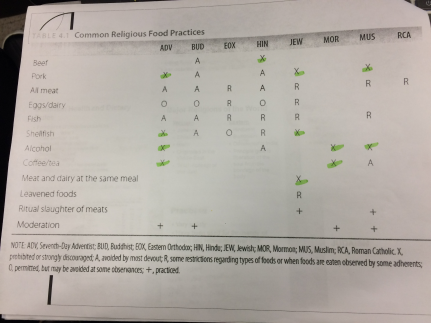