our ability to fulfill our potential through greater self-understandin

our ability to fulfill our potential through greater self-understandin

So Where does the Theory of Personality come from?

One May What a Personality Trait is?

So, What is Personality? 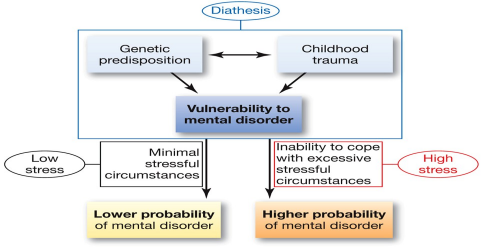 Just because of vulnerability to a disorder doesn’t mean you will have it but the  environment does play a bigger role Anxiety Disorders  - Anxiety disorder: psychological disorder characterized by excessive fear and anxiety in  the absence of true danger - Specific phobic: intense uncontrollable fear of specific objects or events - Ex: See a snake and freak out, fear of elevators or planes, specific things triggers fear - Social Anxiety Disorder: fear of being negatively evaluated by others - Ex: Fear of public speaking, speaking up in class, meeting new people, and eating in front of  others - One of the earliest forms of anxiety disorder to develop, often beginning around age 13  - Generalized anxiety disorder (GAD): a diffuse state of constant anxiety not associated  with any specific object or event - Constant higher state of anxiety - Ex: Think of the girl working in a lab and the lady standing over her shoulder. Those who  come up with a funny story have little anxiety, while those come up with a negative story  have higher anxiety levels.  - Agoraphobia: anxiety disorder marked by fear of being in situations in which escape may  be difficult or impossible - Ex: Being on a bus or car and not be able to escape. You’re not afraid of leaving home but  afraid of situations where you can’t escape *Side Note on Panic Attacks: Anyone with other anxiety disorder can have one, people  before they are treated usually go to the ER thinking they are having heart attack  - Obsessive-compulsive disorder (OCD): disorder characterized by frequent intrusive  thoughts and compulsive action ** Like Sierra has the frequent intrusive thought of always needing to wash her hands and so she pleases that thought by actually doing it.  - Obsessions: recurrent, intrusive, and unwanted thoughts or ideas or mental images- Compulsions: particular acts that the OCD patient feels driven to perform over and over  again - Most common compulsive behaviors are cleaning, checking, counting [The Three C’s].  - Those with OCD anticipate catastrophe and loss of control.  - Yes, Sierra believes that it will be a catastrophe if she touches something germy  and then she feels as if she has no control of what is happening to her.  - Posttraumatic stress disorder (PTSD): disorder that involves frequent nightmares,  intrusive thoughts, and flashbacks related to earlier trauma - Marked by an inability to forget *OCD & PTSD are 2 unique anxiety disorders that are characterized by frequent intrusive  thoughts.  Mood Disorders - Major depression: disorder characterized by severe negative moods or a lack of  interest in normally pleasurable activities  - Last several months to years - Highest rates being women in developing countries, although affects 6-7% of Americans in  any 12 month period (she said to know what a developing country is) - Persistent depressive disorder: a form of depression that is not severe enough to be  diagnosed as major depressive disorder, sometimes called dysthymia.  - Lasts 2-20 years - Affects approximately 2 to 3 percent of the population  - Must be depressed for 2 years to get this diagnosis What Causes Depression? - Biological components: - Deficiency of one or more monoamines (serotonin, dopamine, etc.) - Damage to the left prefrontal cortex (but NOT the right) - Biological rhythms - Situational components: - Number of studies have implicated life stressors in many cases of depression  - Ex: Developing terminal illness or seeing someone have this illness. Failing classes and  losing your scholarships What are the Cognitive Components of Depression? - People with depression think negatively about themselves, their situations, and the future - These negative thoughts about self, situation, and the future is known as cognitive triad - These dysfunctional cognitive patterns are a cause rather than a consequence of  depression  - Learned helplessness: a cognitive model of depression in which people feel unable to  control events in their lives

the breadwinner homemaker model of marriage