UW / Psychology / PSYCH 202 / What is the process involved in turning the genes on and off?

What is the process involved in turning the genes on and off?

What is the process involved in turning the genes on and off?

Description: One week of notes on biopsychology

How Are Neural Messages Integrated into Communication Systems?

Development: why does one cell turn into one type and another a different type?

Biological Psychology I: Genetics, the Nervous System and Neurotransmitter Processes Overview of Today’s Lecture – Introduction to the role of genetics  – Structure of the Nervous System – Review of elementary Neuronal Structure and Physiology – Neurotransmitters and Their Neuronal and PsychologicalDon't forget about the age old question of mth 311
If you want to learn more check out What is a group of firms acting in unison?
We also discuss several other topics like What are examples of gendered products?
Don't forget about the age old question of Describe the cartesian vector notation.
We also discuss several other topics like What do you mean by DBMS?
If you want to learn more check out Is the fastest growth in excitatory conditioning occur on the fourth trial?
Functions – A Few Practical Illustrations/Applications Some Orienting Concepts on Genetics in Psychology: 1* Every cell in our body contains chromosomes which contain DNA  which contain the genes. Human body – Cell – Chromosomes – DNA ­ Genes – What is “Genetics”?  2* A) Heredity of specific characteristics:  – e.g. Mendel’s peas: A monk, he developed projects known as  Mendelian genetics. Basis for calculating specific probability of a  particular train showing up in the next generation based on the  previous generation – Recessive and Dominant Genes – Precise mathematical rules – Conditions under which the characteristics show up (hair color, eye color,  balding...) Depression, schizophrenia are also genetic but we do not understand  those combinations as well – Very, very limited in predicting complicated traits (heart disease, cancer,  genetic model of learning?) – Only good when there are single genes in control (often untrue) Fig. 3.2 – Peas and the color of their flowers 3* B) Processes involved in turning genes on and off: Genetic switching,  operate in complicated ways in response to environmental conditions. Genes do not operate separate from their environments. Development: why does one cell turn into one type and another a different type? 4* C) polygenic effects:  Most illness processes influence us through the  simultaneous operation of genes – Chromosomes: 23 pairs in every cell.  – What Genes are: Segments of DNA, designed to code for specific  proteins.  – What Genes do: Regulate the expression of protein (how we think,  dream, imagine, hate, create, love….) – Gene Expression: Coding for specific protein product. A segment that  gene is momentarily exposed (unwrapped) to its surrounding  environment and expression is allowed. RNA polymerase When methyl chemical groups (chemical packages) attach to the DNA there is reduced  accessibility to genes Genes not expressed, but repressed. Repression of gene expression can occur through  DNA methylation. Methyl groups prevent DNA from unwinding and being exposed,  therefore cannot be expressed.  “Epigenetic” modifications of genes and the impact for human health  (cancer, stress­reactivity, etc):  Above genome. Events that affect genes but  don’t change them. No change of DNA but expression is altered. Comes  through experiences (food, toxins, other substances, behavioral effects) All of our cells have the same genes but they’re all different DNA is wrapped around a cluster of proteins called histones. Underlying cancer and stress reactions are epigenetic effects. Tumor suppressing cells are constantly fighting cancer – Can be turned off by an  epigenetic modification of the genome. If they’re methylated they are unexpressed (can’t  prevent cancer)– Genes are silenced/repressed – Environmental origin – HPA axis – need a health stress­response to be a healthy person. Healthy stress  response genes can be silenced by environmental consequences.  – Studies have shown that stressed rat mothers ON EXAM o Rats that don’t get the “rat love” experience have reduced glucocorticoid  receptors o Epigenetic modification of the healthy stress response (turned off, cannot  handle stress) Genes Affect Behavior – Behavioral Genetics Methods: Differences between identical and  nonidentical twins 5* Twin Studies Compare MZ(identical, monozygotic) and DZ(not  identical, dizygotic) Twins:  6* Adoption Studies: MZ and DZ adopted in different environments.  When some kinds of traits are looked at – the adopted children are  much more like their biological parents than their adoptive parents  (personality traits, etc.) – Heritability: The degree to which an underlying genetic characteristic  in a population accounts for differences in the expression of that trait  (don’t tell us anything at all about individuals) only tell us about that  trait in a group – Ex. IQ, weight, etc) are hereditable – in a group (population) genetic differences  account for differences in the variable Gene Expression Can Be Modified – Manipulating Genes:  7* Pick your Mouse (or person?) You can make them the way you want  them to be.  8* Alcohol preferences video: – Manipulating Environments: 9* “Mother Nurture” article: Two groups of mice, calm vs anxious.  Cross­fostered – Changed to a different mother of different group.  Took the pups and switched them after birth. Dip the pups in alcohol  to take their smell away so that the mother doesn’t kill the pups that  aren’t hers. The pups were more like the mother they were raised by  than the one they were biologically related to. Genetically calm pups with anxious mothers became anxious. Environment trumps genetics? IQ, FADS 2 Breastfeeding increases IQ? 10* “epigenetics” again, stress­reactivity: A genetic tendency is not  expressed because of an environmental effect. How Are Neural Messages Integrated into Communication Systems? 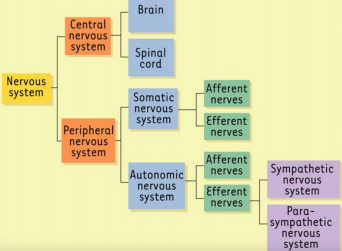 mix it up david grazian

What is the hierarchical structure of nervous system?