GWU / Business / BADM 1004 / What is the collective action problem?

Description: These notes encompass notes from lectures for the second half of the semester.

∙ What does political science tell us?

o What needs to be true to deal with major externalities

o Policy costs are often concentrated on a few people

o Benefits are spread out over millions of people

 In the case of global warming, billions of people, most of  whom are either non-citizens or as-yet-unborn  Don't forget about the age old question of physiological drive to consume food

o So the transaction costs of political mobilization are lower for the  few than for the many; their voices will be louder

What are the long time horizons?

 Imagine a collective house with dishes to be washed

 For international problems, governments can free-ride on  the actions of others

o Difficult to assign blame or credit when

 Policies and outcomes are complicated

o Elections every 2, 4 and 6 years leads politicians to think about  policies that will have short-term impacts

What is partisan learning?

 This is a growing problem but not a barrier

o Politicians can take credit for it

∙ If a policy matches these four characteristics, then it is easy to make it  happen

o If not, then you need to devise strategies to convince politicians  to come around

 Requires lots of different politicians to act (Clarity of

∙ This is exponentially worse by the fact that multiple

 Benefits of action are decades into the future. Costs are  now. (Time Horizons) Don't forget about the age old question of bzzagent facebook

o And global warming is a global problem, making everything  worse!

 Vermont has no coal

 Alaska, Hawaii, Puerto Rico and Guam are still being sorted out  Don't forget about the age old question of uo constant

 Raising renewable and nuclear share to 28% of electricity  generated

∙ No allowance for energy efficiency

o In other words, the EPA will set a target for each state  ∙ States can do what they want to meet the goals

o They can ramp up RPS requirements

o They can go all-in on conservation

o They can do nothing

∙ If they do nothing, the feds will step in

o Coal plants dump out a lot of nasty NOX and SOX We also discuss several other topics like a category of people who have unequal access to positions of power, prestige, and wealth in a society and who tend to be targets of prejudice and discrimination.
If you want to learn more check out laws2301

o Some companies get a slice of free permits

 The US and Canadian government auction the rest off

o The coal plants can then trade the permits among themselves   If you have a coal plant and you can’t reduce NOX output,  you have to dive into the market and buy permits

 If you have a coal plant and find it really cheap to clean  your exhaust, you can sell the permits you don’t need (the  trade)

 When militaries from other countries participate in

o Although war is still happening, the violence (deaths in war) is  declining

∙ What about interstate war?

o Upshot: wars could be just as intense as ever but kill fewer  people

∙ Countries promise to give up nuclear weapons in

return for aid with nuclear power

∙ India, Israel and Pakistan have never signed and

 Olenegorsk radar identifies it as a US Trident SLBM

 10:16  a Russian radar picks up two “ballistic objects” in  the Mediterranean

 Other countries will need to go nuclear in response

o Iran will have to discontinue their nuclear programs

o There will be inspection

o If, at any time, that any evidence came out that Iran went  against anything in the deal  Sanctions will instantaneously  snap back to what it was before

∙ It hasn’t stopped Russia and Ukraine from going to

o United Nations has been a great boon to humanity

o American empire has been a great boon to humanity

∙ Globalization is not the reason

∙ Evidence is not clear

Without theory, there are no predictions

o Civil war is a war between factions within a state

 Can range in intensity

o Geography means that Europeans have to worry

∙ For every one-point rise in the population share 15-

 Probabilities are not certainties

 Outsiders provide less support than during the Cold War   The UN  with armed peacekeepers on the ground, the  chance of a civil war restarting drops by 80%

 But there are a lot of floundering missions

 Lots of places where peacekeepers do not venture (like  Syria)

o Tactic, not an ideology

o Outside of active war zones, there is no discernable trend in  terror incidents

 US financial markets recovered within 30 days of 9-11

 Small fall than other wars

 It is a predictable risk for business, like natural disasters  o There is a small risk when hostile groups have a foreign haven  o Big risk is a subset of nuclear war

∙ What happened in Mexico

 Involves a lot of killing

 Moving narcotics o the US is not as profitable

 Gangs go into other businesses

o After collection, they transport the condensate by pipeline or  tanker truck to storage facility

∙ Why hasn’t any of this crossed the US border?

o US officials are corrupt

 100 arrests and over 130 state and federal cases

 In Tamaulipas, the state disbanded the police in 2011  ∙ In Texas, not so much

 Cops will pull them over and then let them go

∙ The US does not care

o Mexico does not either, at least not about drugs

∙ Interstate war has declined but not disappeared

o Poses a risk for business

o Challenge for citizens to preserve our gains

o Nuclear terrorism would change everything

 France and Britain allied to the US

∙ The decline of war

o The Cold War made civil wars much worse, and now the Cold War is over

o The US keeps the peace (mostly)

∙ How did US crash cause stress to the whole world

 Every financial city is linked

∙ How could Fed allow this bubble to occur?

 Lack of supervision and more money for consumers

o Since interest rates were low, banks had to innovate new  financial instruments to get more money

o People got into housing  prices went up, mortgages went up

 Government didn’t surprise people who did this

 AAA bonds so you can’t tell good from bad 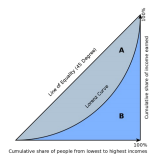 o Due to destruction of capital income

 Luck plays a large part on the outcome

o Give vocational schools and colleges “skin in the game”   Tie tuition to future earning  equity vs. debt

o American adults went from 8.5 years of schooling to 13.2  now  we are stagnated

o Zero inequality is not an option

∙ What does political science tell us about democracy?

o What needs to be true for “good” policies

o Difficult to assign blame when

 Policies and outcomes are complicated

o Elections every 2, 4, or 6 years leads politicians to think about  policies that will have short-term impacts

 Democracy seems to deal well with this problem

o Sclerosis from too many veto points

∙ What is the EU?

∙ How does the EU enforce its laws?

violating its own law

∙ EU has no executive to pick up the slack

o Remain responsible for pension, health and defense spending   Need to be able to borrow

o Money is speech in the US

o Not just an international organization either

∙ Why did European government submit themselves to the EU?  o Functionalism

 Integration was seen as the only way to do that

o How is capital transferred between savers and borrowers?