What is the definition and general characteristics of each cloud type?

--How are clouds classified?

what are these particles called specifically?

67 questions multiple choice/True-False 3 points short answer format 10 points of extra credit (short answer format). There are 8 diagrams (taken from the notes) that show up on the exam itself. So, again, pay attention to our diagrams drawn out in class and what appears on the outlines too. Outline 4 (section II only—We also discuss several other topics like realism and impressionism art
If you want to learn more check out wcupa
We also discuss several other topics like wcupa
If you want to learn more check out where does excel automatically save and store the personal macro workbook?
Don't forget about the age old question of 4) What is a Lichen?
Don't forget about the age old question of gcu exam
Clouds): --For the clouds section, you will need to know how water droplets form (condensation and of course, having the critical particles in the air for the water vapor to condense onto….what are these particles called specifically?) Clouds form in rising air conditions only. As an air parcel rises it may cool to the dew-point temperature where relative humidity is 100%. More lifting of the air parcel cools it further, producing condensation of water vapor into water. Condensation requires cloud-condensation nuclei​. --How are clouds classified? Altitude and shape are key to cloud classification. Clouds occur in three basic forms--flat, puffy, and wispy--and in four primary altitude classes and ten basic cloud types. Horizontally developed clouds--flat and layered--are stratiform clouds. Vertically developed clouds-puffy and globular--are cumuliform clouds. Wispy clouds are quite high in altitude and are made of ice crystals; these are cirroform. What is the definition and general characteristics of each cloud type? (examples: Where do altocumulus clouds form (high, middle, low altitude) and what is their form (horizontal or vertical shape?) What kinds of clouds are found at high altitude? 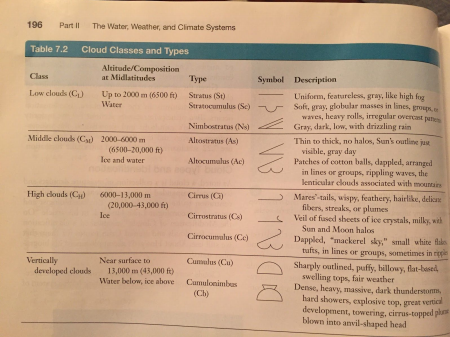 Which type of cloud is a good indicator that a storm is approaching? Cirrus clouds indicate an oncoming storm. What type of cloud does our most violent weather come from? Cumulonimbus. Describe a stratus cloud. Uniform, featureless, gray, situated at low altitude. Which clouds produce rain? Nimbus clouds. Outline 5: --Air masses: Know what they are and what source regions are. An air mass is a body of air which exhibits fairly uniform temperature and moisture characteristics. A source region is the geographic location from which an air mass originates. Two ex of source regions: gulf of Mexico and Canada. Know all the air masses that impact US (and Los Angeles) weather. Know what source regions all of these air masses come from. U.S.: impacted by mT, mP, cP (cT, cA) Los Angeles: mP (winter) (mT)1. Maritime tropical a. Source regions: mid pacific, gulf of mexico, mid atlantic 2. Maritime polar a. Source regions: gulf of Alaska, North Atlantic 3. Continental polar a. Source regions: Central Canada 4. Continental tropical a. Source regions: Interior of Mexico, northern Canada 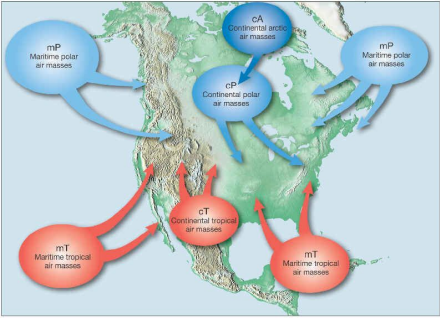 A. Lithosphere 1. Definition: strong brittle outermost layer that lies above the asthenosphere a) two parts: crust (solid part, outermost layer), underneath the crust we have the brittle rock (highly heated layer that is not solid rock but isn’t quite melted - on the verge of melting - transition between solid and melted) b) the lithosphere is broken into pieces (1) lithospheric plates (they are moving independently and they collide, you get earthquakes, volcanics) 2. Crust a) Continental crust: 20 miles thick on average, felsic igneous rocks (granite) - high % silica - low density b) Oceanic crust: 6 miles thick, mafic igneous rocks (basalt) - low % silica - high density c) Composition: as a whole 95% of the crust is igneous rock - granite and basalt, 5% is sedimentary and metamorphic, composition of the crust exposed at the surface is 75% will be sedimentary rocks, 25% would be igneous and metamorphic. Sedimentary rocks are made at the surface that’s why we find them at the surface. B. Asthenosphere 1. 2600 degrees Fahrenheit the rocks are all melted down. Convection currents within the asthenosphere C. Mantle 1. comprises 80% of the Earth's total volume. Ultramafic: everything mafic but more - very dense, the minerals are tightly packed together that they act like solid D. Outer Core / Inner Core 1. outer core is a liquid iron. 90% of the Earth's magnetic field is generated here. 2. inner core: solid iron in a molten state. The heat is coming from radioactive decay in the inner core only. --What is plate tectonics?  The general theory of the relative motions and boundary interactions of lithospheric plates. Where the plates collide into each other is where we destroy crustal material.--Where do we create new crust (and what kind of crust is it)? Where do we destroy crustal material? Sea-floor spreading is the mechanism that builds mountain chain and drives continental movement. Submarine mountain ranges, called the mid-ocean ridges, were the direct result of upwelling flows of magma from hot areas in the upper mantle and asthenosphere and from deeper lower mantle. When mantle convection brings magna up to the crust, the crust fractures, and the magma extrudes onto the seafloor and cools to form new seafloor. 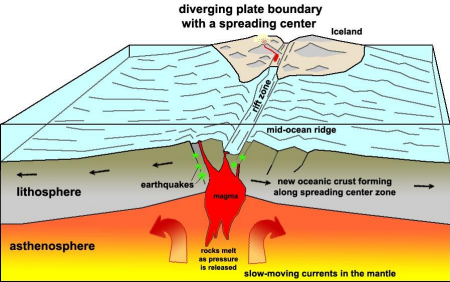 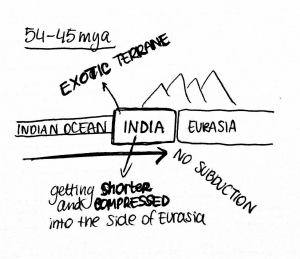 2. Give me an example of a magmatic arc. What kind of boundary do they occur along? Magmatic arc (Andes, Cascades), the oceanic plate is going to run into a continental plate because it’s denser.Give me the name of the plates responsible for the creation of the magmatic arc examples given in class. Ask the same of volcanic island arcs. 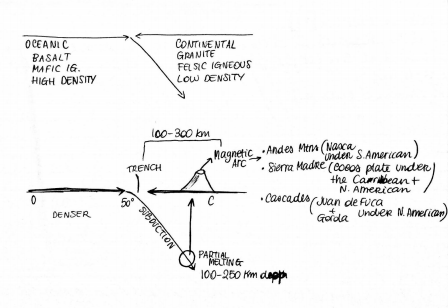 Ask the same for volcanic arcs. 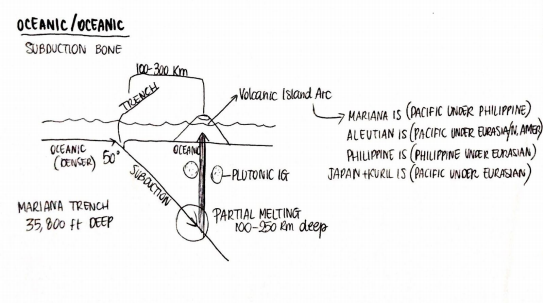 --Know the plates involved in all collisional boundaries discussed in class (if you are running out of time, don't waste it here...only about three questions will be asked regarding this topic). --Do we get volcanism and earthquake activity along subduction zones? Yes Know where specifically. --Know ALL the facts and numbers associated with the subduction zone diagrams that we did in class. 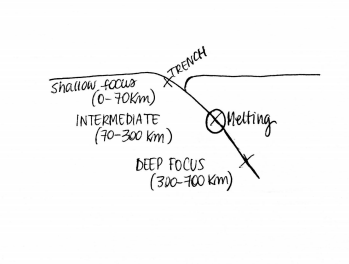 --What is a hot spot, give examples, and how do hot spots prove that plates move? Faults (earthquakes): 1. Hot spots a. are random isolated columns of molten material that represents a direct connection from the asthenosphere directly to the surface b. they are fixed in place​, they do not move with the plates c. you end up with a chain of mountains but just one of them is active d. ex. Hawaii​, Yellowstone National Park ​(doesn’t pump out molten material like Hawaii, because it comes through a continental crust), Iceland e. not caused by plate tectonics f. we use hot spots as a proof that plate moves g. they determine plate speed and direction--Know the difference between the three types of faults and what causes them. --What causes the Sierra Nevada to rise (compressional or tensional stress? Normal, reverse, or transform faulting?) Do we get uplift (mountain building) or not with each type of fault? Apply these questions to ALL the faults and examples. --Be able to name examples of real world locations where we find normal, reverse, and transform faults. --Know everything about the San Andreas fault. a. Normal fault (Sierra Nevada and Peninsular Ranges) - vertical displacement when one block goes down and one goes up i. caused by tensional stress

c. Transform fault - horizontal displacement (produces earthquakes, not uplift) i. Along an offset of the mid oceanic ridge ii. The San Andreas fault

--Southern CA has two types of faulting activity. What are they and what is causing them to occur here? The earthquakes of California are caused by the movement of huge blocks of the earth's crust- the Pacific and North American plates due to the San Andreas fault (transform fault) and some reverse faults. 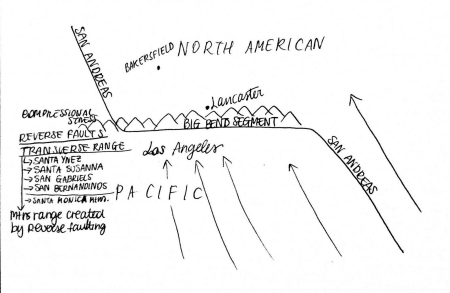 Outline 11 (Fluvial) --How does water move/transfer from the atmosphere to the land? How does it move from the land to the atmosphere? The hydrologic cycle begins with the evaporation of water from the surface of the ocean. As moist air is lifted, it cools and water vapor condenses to form clouds. Moisture is transported around the globe until it returns to the surface as precipitation. --Know the factors affecting runoff and infiltration. For example: --How does a steep slope affect how much runoff and how much infiltration we have? --How does the urban environment affect runoff compared to the natural river environment? --What is lagtime and how does it vary between the urban and natural environments? A. Factors affecting amount of runoff/infiltration a. runoff->erosion: removal of rock/dirty on the surface b. Minimize runoff in order to minimize erosion 1. Duration and intensity of precipitation event a. Downpour of Rain = Increase in runoff, decreasing infiltration b. Light Rain = Decrease of runoff, increase infiltration 2. Slope of ground a. Steep slope = Increase runoff, decrease infiltration b. Low/flat slope = Decrease runoff, increase infiltration 3. Permeability of the soil a. How easily can water soak into the ground (can the water go through or does it get stuck) b. Interconnection of the air spaces in soil or rocks c. Clay: does not have interconnection in results water gets stuck in the air spaces, water is then trap -> Runoff will increase while infiltration decrease d. Sand: has great interconnection in results water will go through -> Infiltration will increase and runoff will decrease 4. Biological factors a. What can minimize erosion?i. Groundcovers (Veggies), mulch (dead leaves, shredded stuff) = Increase infiltration, decrease runoff 5. Surface a. Pavement i. 100% runoff, urban environments (sidewalks, parking lot, etc.) - impermeable 6. Lag time (is the delay between peak rainfall and peak flow in our rivers) a. a) urban river flow vs. natural river flow 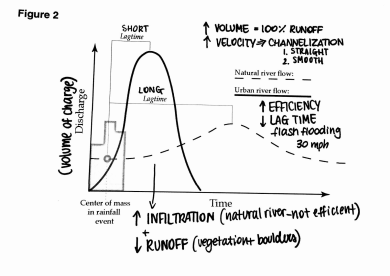 --Does a downpour increase or decrease infiltration? Downpour of Rain = Increase in runoff, decreasing infiltration --How does a thick layer of mulch affect runoff and infiltration rates? etc..... Groundcovers (Veggies), mulch (dead leaves, shredded stuff) = Increase infiltration, decrease runoff--What are the three factors that affect velocity of flow? Factors determining velocity of flow Gradient (slope angle) i. Velocity increases with increasing gradient Volume ii. Increase in volume = increasing velocity Friction iii. Increase in friction decreases velocity --Describe the gradient, volume of flow and friction associated with the headwaters and mouth of a river....and how this increases or decreases overall velocity of river flow. The slope, or gradient, of the river is highest near the headwaters and lowest at the mouth of the river, where it is terminated in a larger body of water, such as a river or ocean. 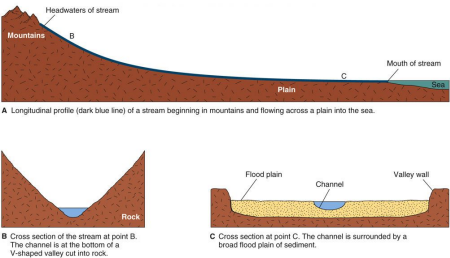 --What kind of erosion and resultant landscape are typical to the headwaters and mouth of rivers? 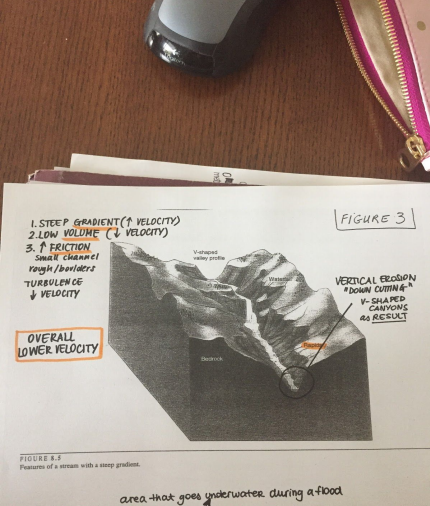 Headwaters: vertical erosion “down cutting” - v-shaped canyons Mouth of rivers: (horizontal) lateral erosion  --Know the landforms associated with the gentle gradient river profile. Certainly know the different cross profiles of river channels in straight-away river sections and across meanders of a river.....where is velocity the fastest in these profiles? A. Landforms of a gentle stream gradient 1. Floodplain a. is the area that goes underwater during a flood b. is going to continue develop the riverWhat are oxbow lakes and how do they form? What kind of feature comes before the formation of the oxbow lake? An oxbow lake is a U-shaped body of water that forms when a wide meander from the main stem of a river is cut off, creating a free-standing body of water. This landform is so named for its distinctive curved shape, resembling the bow pin of an oxbow. What is the cutbank and where is it located and what kind of energy is associated with it? 1. Cutbank a. outside of meander b. high energy -> erosion c. maximum flow Ask the same of the point bar. 1. Point bar a. channel cross sections b. inside of meander c. low energy d. accumulates sand