SFSU / Biology / BIOL 525 / what is the starting molecule for glycolysis

what is the starting molecule for glycolysis

what is the starting molecule for glycolysis

What is the purpose of fermentation?

How many ATP and NADH are produced in Glycolysis when Glyceraldehyde­3­P is oxidized to pyruvate?

What happens to this molecule? 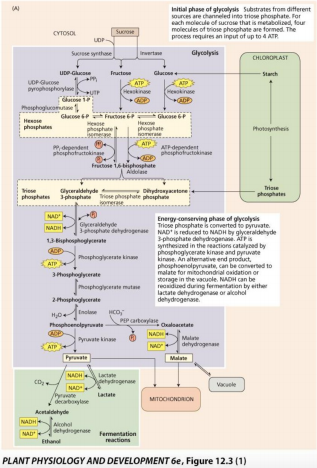 1. Which two enzymes break down Sucrose? What are the products from each reaction? What is the difference in ATP requirement for glycolysis when these different enzymes are used? ­Process called glycolysis.  Sucrose Synthase and Invertase are the enzymes that breaks down sucrose. ­Invertase hydrolyzes sucrose in the cell wall, vacuole or cytosol. Invertase forms fructose and glucose (hexoses) and later phosphorylated by hexokinase that uses ATP to form hexose phosphate. Sucrose synthase combines sucrose with UDP to form fructose and UDP­glucose. Invertase uses energy as ATP to phosphorylate glucose and fructose into a hexose phosphate.  2. The action of hexokinase and phosphofructokinase produce which molecule? What happens to this molecule? ­Hexokinase uses ATP to make Fructose 6­P and Glucose 6­P from the invertase pathway.  Phosphofructokinase converts Fructose 6­P and Glucose 6­P into Fructose 1,6­bisphosphate. 3. How many ATP and NADH are produced in Glycolysis when Glyceraldehyde­3­P is oxidized  to pyruvate? ­2 ATP and 1 NADH is produced when a glyceraldehyde­3­phospate is oxidized to pyruvate. 4. What is the purpose of fermentation? What conditions would cause a plant to undergo  fermentation? ­Fermentation: the metabolism of pyruvate in the absence of oxygen leading to the oxidation of  the NADH generated in glycolysis to NAD+. Allows glycolytic ATP production to function in  the absence of oxygen. 5. The Citric Acid Cycle (a.k.a. 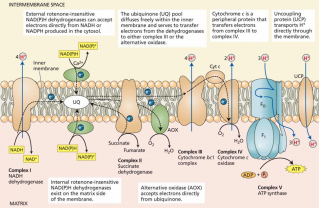 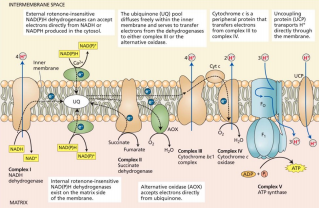 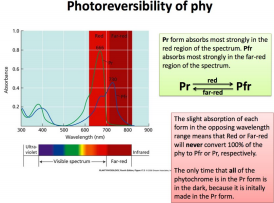 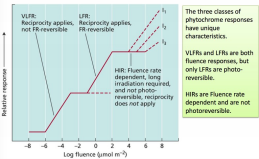 seedlings (etiolated). The cyan blue colored inactive form is converted by far red light absorbing form which is pale cyan green in color and is considered to be the active form of phytochrome.  Pfr can revert back to being active Pr in darkness but this is a relatively slow process. However, Pfr can be rapidly converted to PR by irradiation with far red light. ­Fluence: a measurement of the number of photons, irrespective of time ­Fluence rate: a measure of the number of photons, per time period (thought as brightness 2. What is the molecular nature of 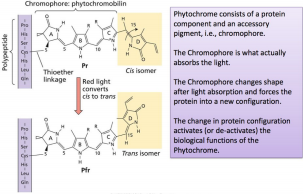 phytochrome? Is it a monomer or dimer? What is the basic structure of the chromophore of phytochrome? How does the chromophore’s shape change after absorption of light? What does this do to the phytochrome protein to allow for a different function? What does the nuclear localization signal do? ­It is a dimer; interaction of the phytochrome protein with other cellular components ultimately brings about changes in the growth, development, or position of  an organ.  Responses fall into two general categories. Ion fluxes, which cause relatively rapid  turgor responses and altered gene expression, which typically results in a slower, longer term  response. A nuclear localization signal is needed, which is a specific amino acid sequence  required for a protein to gain entrance into the nucleus. 3. What are PIFs? How do PIFs and Phytochromes act to control the expression of light  responsive genes? ­PIF:  phytochrome interacting factors; families of phytochrome interacting proteins that may  activate and repress gene transcription, Some are targets for phytochrome mediated degradation.  They are negative regulators of photomorphogenic responses. PIF regulates various aspects of of  phytochrome mediated photomorphogenesis, including see germination, chlorophyll  biosynthesis, shade avoidance, and hypocotl elongation, while promoting etiolated development  in the dark, by serving as transcriptional activators of dark induced genes. 4. What are the morphological differences between Photomorphogenesis and  Skotomorphogenesis? What does “etiolated” mean? What are etiolated seedlings trying to do?  What does a red light flash do to the etiolated seedling? ­photomorphogenesis:  the influence and specific roles of light on plants development. In the  seedling, light induced changes in gene expression to support aboveground growth in the light  rather than belowground growth in the dark. ­ skotomorphognesis: is the developmental program plants follow when seeds are germinated  and grown in the dark. ­etiolation: effects of seedling growth in the dark, in which the hypocotyl and stems are more  elongated, cotyledons and leaves do not expand and chloroplasts do not mature.  5. What do the Red HIR and Far­Red HIR responses do to an etiolated seedling in terms of  hypocotyl growth? Loss of phyA destroys which HIR response? Loss of phyB? ­R­HIR makes the hypocotyl grow normally, and is mediated by phythochrome A, allowing for  normal growth. Loss of phytochrome A makes the hypocotyl grow longer in far red light and  unable to open the cotyledons. In far red light, seedlings grow small in response to the low  fluence rate of light, while seedlings exposed to red light grow longer than those exposed to far  red light, and the absence of phytochrome A in red light grown seedlings have a longer hair root,  while the absence of phytochrome B makes the hypocotl grow longer. Phytochrome A seems to  be correlated with leave unrolling, and cotyledon opening, while phytochrome b plants lacks 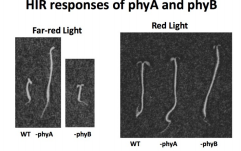 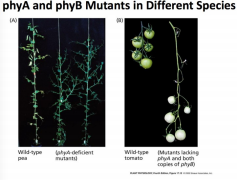 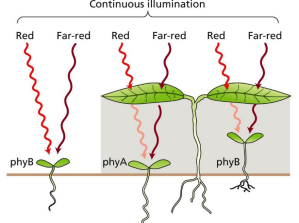 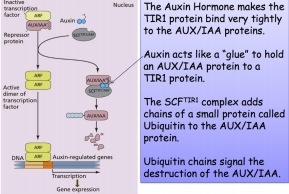 absence of the auxin hormone, the AUX/IAA proteins prevent the ARF proteins from promoting the expression of auxin­regulated genes.  ­Auxin makes the TIR1 protein bind very tightly to the AUX/IAA proteins. Auxin acts like a glue to hold the AUX/IAA protein to a TIR1 protein.  10. What are PIN proteins and what are the AUX1 proteins used for in Auxin transport? How are these proteins localized with the cells to promote the polar transport of Auxin? How does Auxin enter and exit  a cell? B. Ethylene1. What is the chemical structure of this hormone?  H2C=CH2 2. Why did coal lights in the late 1800s cause plants living near them to defoliate? Coal lights produced ethylene, which is used for regulation of leaf abcision.  3. What is the triple response of etiolated seedlings exposed to ethylene?  Not natural, and happens when plants are exposed high levels of ethylene.  1. shorter hypocotyl 2. horizontal growth, and curved apical hook 3. increased lateral growth (wider stems) 4. What are the roles of Auxin and Ethylene in leaf abscission?  Higher concentrations of ethylene messes with auxin 5. Why would a banana ripen faster in a closed container that contained an apple than in the  same container without an apple? Why wouldn’t an orange ripen faster? Apples produce ethylene, and ethylene ripens fruit faster and oranges and other citruses don’t  ripen with more ethylene. C. Cytokinins 1. Why would the thermal breakdown of DNA create a bio­active, although unnatural, cytokinin  hormone?  Trans­zeatin (cytokinin) is structurally similar to adenine (DNA sugar). Heat can break apart  hydrogen bonds.  2. What is the bell­curve like cell­division 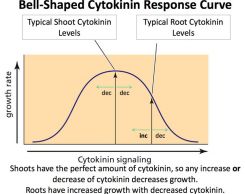 response to cytokinin in roots and shoots?  3. What would a cytokinin insensitive plant look like? A cytokinin insensitive plant would be dwarfed compared to a normal version. 4. In cultured callus tissue, how can you induce the formation of roots or shoots? Yes, increasing only auxin concentration will make new roots, while increasing only cytokinin concentration will give new shoots. 5. Why do many pathogens make cytokinins? What happens to plants that have been infected with Agrobacteria? What neat thing does  Agrobacteria do to the genome of the plant cell that it infects? What types of genes does it add?To feed and grow and reproduce, it makes a special food for the bacterium (sugar with nitrogen). Plants that have been infected develops a crown gall tumor. Agrobateria cuts a small specific set  of DNA from its plastid, and injects its cut piece into the plant cell, where the plant will add it to  its own genome.

Which is an essential ingredient for a religion?