What do you call the number of subjects involved in a study?

What do you call the number of subjects involved in a study?

Description: These notes include the Introduction Packet and Prerequisite Math Skills Packet.

Subjects: The objects from whom, or about whom, data is collected. The objects may be living or nonliving, tangible or intangible, may consist of events or abstract concepts. One way to Identify the subjects in a story is to first identify the sample size "n", then ask yourself "n of whom/what are we getting information about". We also discuss several other topics like What is a functional groups?

We also discuss several other topics like What is the area of accounting that serves the decisionmaking needs of internal users?

Population: The entire group of subjects that we wish to get information about in a single study. In reality, It is often time-consuming or costly to obtain data from the entire population under consideration, so we usually work with samples. We also discuss several other topics like What is is AJ Oparin's importance?

Don't forget about the age old question of What is is used to format the structure and style of a Web page?

Sample: A subgroup of subjects within a population. In real life, we would obtain data from a sample instead of a population, and then use our knowledge of statistics to make inferences about the population from which the sample was drawn.

Parameter: A numerical measurement that describes a characteristic of a population. We also discuss several other topics like What is the concept of progress?

Statistic: A numerical measurement that describes a characteristic of a sample. Very often sample statistics are used as estimates for the corresponding population parameters.

The table below Shows the symbols used to represent some Parameters and statistics.

The picture below may help you to understand the concept of population, sample, parameter and statistics better.

Some parameters of the population are: 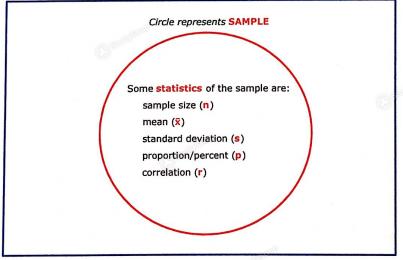 Subjects: all the persons living in your house        Observations:age or each person

What is a form of reinforcement used to support roman replicas of greek statues?