UM / BIL / BIL 160 / how did lamarck propose that species evolve

how did lamarck propose that species evolve

how did lamarck propose that species evolve

Description: This study guide covers what we have so far covered in class as well as features some questions to study from

● What aspects of the fossil record posed a problem for a biblical creationist view of life on earth?

● How did the work of Linnaeus help to deal with this issue?

● Why was the fact that organisms fit into broad, nested groups a problem for pre-Darwinian thinkers?

BIL 160 CH.22 Study Guide Vocabulary: Evolution Scala Naturae Taxonomy Fossil Strata Paleontology Catastrophism Use and disuse Inheritance of acquired characteristics Gradualism Uniformitarianism StudyDon't forget about the age old question of nh2ch3 intermolecular forces
If you want to learn more check out mar3023 fsu
We also discuss several other topics like nouns that function us indirect objects are generally introduced by the preposition à; they often answer the question to whom?
Don't forget about the age old question of engr 3341
If you want to learn more check out the three fundamental questions that any economy must address are:
If you want to learn more check out uo econ
Questions: ● Describe the prevailing cultural ideas regarding the diversity of organisms on the planet before the Darwinian Revolution. ● Why was the fact that organisms fit into broad, nested groups a problem for pre-Darwinian thinkers? ● How did the work of Linnaeus help to deal with this issue? ● What aspects of the fossil record posed a problem for a biblical creationist view of life on earth? ● Who was Cuvier, and what did he suggest to account for some of these problems? ● What two principles did Lamarck propose to explain the apparent evolution of organisms? Describe these two principles with an example. ● Is Lamarck’s mechanism of evolution valid? Why or why not? ● What islands off the coast of Ecuador did Darwin visit? ● What is special about these islands? ● What observations helped lead Darwin to his ideas about evolution? ● What are the theories of gradualism and uniformitarianism? Who proposed these ideas? ● How did these ideas from geology influence Darwin? ● How was Darwin influenced by Thomas Malthus? ● How did his ideas help to shape the idea of natural selection? ● Who was Alfred Russell Wallace? Evolution ● Process of ​adaptation​ → survival and reproduction: change in genetic composition of a population over time. Origin of Species (1859) - Descent w/ modification - Natural selection- Evolution IS NOT natural selection; natural selection is a mechanism of evolution Bio-diversity - insects - 1,000,000 species - Fungi - 100,000 species - vertebrates - 57,000 species - Plants - 290,000 species - Single-celled - MANY species (unknown by scientists) Pre-darwinian thought and Historical context ● Biblical creationism: perfectly designed organisms. Young earth(ca. 6000y). Humans special place in nature ● Scala naturae: aristotle. Single scale, arrange all organisms. bacteria->humans. Divinely created and perfect. No changes were possible. 1) PROBLEM​: organisms fit into broad, nested groups SOLUTION​: - Linnaeus classification of species - Carolus Linnaeus- father of taxonomy(ranch of biology for classifying organisms) - Organismal adaptations: creators specific purpose 2) PROBLEM​: - Fossils: remains or traces of organisms for the past. - Usually in sedimentary rock in layers or strata.  SOLUTION​: - fossils- old earth, - Georges cuvier (ca. 1800) - catamorphisms- massive catastrophes on the planet that causes massive extinctions. - Each boundary between strata represents a catastrophe - Louis Agassiz: multiple creation events- after the catastrophe, God creates new species 3) PROBLEM​: - organisms seem to evolve  SOLUTION​: - Jean baptiste Lamarck's (ca. 1800) ideas - species evolve through use and disuse - (ex. Giraffes need to stretch for leaves, which over time makes giraffes have longer necks. Same giraffe gets longer neck through lifetime) - Inheritance of acquired traits- The organism with the changed trait mates with someone and those changed raits gets passed on. - August weissman - Experiments show that traits acquired by parents are not passed on as lamarck proposed. - Removed tails of lab mice and showed that although there were many generations of mice without tails, the offspring mice STILL HAD NORMAL TAILS! Darwin and The Origin of Species Charles Darwin - Voyage of beagle (1831-1836) - Galapagos islands: volcanic islands off ecuador. saw species like land iguana - Organisms arrived from mainland organisms - Animals radiated into many different species - There were different types of birds but he sent them to gould and he said they were all finches. Influences on Darwin - Gradualism and uniformitarianism= big change through low process over long time - Changes in earth's surface can result from slow continuous actions still operating today. - Geologists hutton and Lyell - Hutton: things gradually, and continuously changed through time creating GREAT change. - Charles lyell: uniformita..- slow changes at constant rate but will gradually result in big structures like the grand canyon. Uniform changes in the process - Thomas Malthus: economist - Populations grow faster than their resources of space, food and water - Periodically they are kept regulated by disease, famine and war - 1. Resources are limited - 2. Competition for resources 1844: Darwin wrote a 200 page essay describing ideas on natural selection and evolution (didn't publish because of social pressure) 1858: Darwin gets a letter– Alfred Russell Wallace( worked in Indonesia) same conclusions -presented them together at the royale society. 1859: Darwin finished The origin of species and published it Overview Timeline:Natural Selection & Evidence for Evolution Natural Selection ● Artificial Selection: Selective breeding for traits that breeders prefer- leads to extreme differences ○ Causes little resemblance to wild ancestors (crops, livestock, and pets) ● Darwin argues that a simile processes is common in nature (he brought up artificial selection in the beginning of Origin of Species to draw the reader in with familiarity) ○ Observation #1: Populations over-reproduce ○ Observation #2: Resources are limited ■ Conclusion #1: Populations grow until limited resources at which time there will be a “struggle for existence” and most offspring produced will die. ○ Observation #3: Individuals in a population vary, and some of this variation is heritable ■ Conclusion #2: Those variants best suited to the environment will be more likely to survive and reproduce; “differential reproductive success” ■ Conclusion #3: Over time, adaptive traits will accumulate and the characteristics of a population will change ○ Corollary: Two Subpopulations separated in different environments would be selected for different traits based on those environments and subsequently, the would lose the capacity to interbreed→ different species■ Radial Evolution/ Speciation 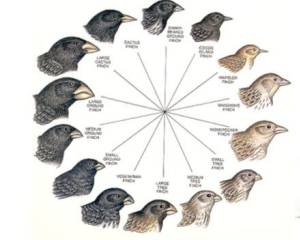 ● RECAP: ○ Natural selection is a process in which individuals that have certain heritable traits survive and reproduce at a higher rate than other individuals (because of those traits)

○ Over time, natural selection can increase the match between organisms and their environment ○ If an environment changes, or if individuals move to a new environment, natural selection may result in adaptations to these new conditions which can give rise to new species ● Can individuals evolve? - Individuals DO NOT evolve. Populations DO. ● Can there be evolution without heritable variation? - Natural selection can only act on traits if they show variation in a population● What is meant by the phrase, “survival of the fittest” and how does it relate to an organism’s environment? - Environmental factors vary from place to place and over time. What traits are favored depends on context. Evidence for Evolution 1) Direct Observations Evolutionary Change a) Evolution of Drug-Resistant Bacteria: MRSA i) 1943 – penicillin in wide use ii) 1945 – >20% S. aureus penicillin-resistant iii) 1959 – first use of methicillin iv) 1961 – 1st strains of methicillin-resistant S. aureus b) Factors that drive rapid rate of evolution in these populations (1) Rapid generation rate contributes to rapid rate of evolution (2) Mutation of the bacteria happens from the opportunity from the large population size being infected. (3) Strong selection pressures 2) Comparative Anatomy a) Homology: similarity resulting from common ancestry i) May have different functions but they have similar skeletal anatomy b) Development i) These features are shared by developing embryos but will develop into different structures depending on the vertebrate species ii) Chick embryo and human embryo both have pharyngeal arches and post-anal tails c) Vestigial structures i) Remnant features that used to serve a purpose when they were of of use in their ancestry ii) These features can only be explained in the context of common descent d) Molecular homologies i) All living organisms use the same genetic code ii) May also see this molecular homology at the protein level (hemoglobin) iii) Genes are shared across species iv) Molecular homologies are found in protein products encoded by DNA e) Convergent evolutioni) It is the process where organisms that are not related have similar traits because they have similar selection pressures because of similar ecological conditions and environments. ii) Analogous features/ traits: perform similar functions but not common ancestry 3) Fossil Record a) Evolution predicts that transitional forms should exist, & also that we should find these fossils in the correct strata b) Darwin was confused because he couldn't see any transitional fossils, fossils that show organisms that are “in the between” of organisms changing overtime. c) He says the fossil record is “incomplete” d) Give a time scale to show were in the fossil record organisms began to exist 4) Biogeography a) Continental drift:was a theory that explained how continents shift position on Earth's surface b) We can make predictions about where we will find fossils for particular groups. c) endemic species: species found in no other place in the world d) Islands tend to have unique flora and fauna, mostly closely related to nearest mainland or neighboring island; dominated by “dispersive fauna”

parent cell for all formed elements of blood