UA / Chemistry / CH 102 / What accounts for he difference between density and volume?

Description: Chapters 12 and 13 This study guide includes extensive notes taken from the textbook. This will provide a different approach to learning the material and will be different from the notes taken in class. Practice problems have also been worked out for any concepts requiring math and formulas.

∙ State of matter (gas, liquid, or solid) depends on the magnitude of  intermolecular forces between the particles relative to the amount of thermal  energy in the sample 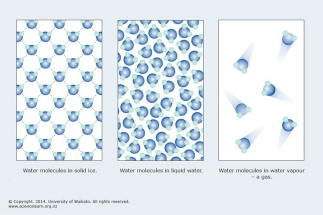 We also discuss several other topics like What is the correlation between common sense and hindsight?

∙ Differences in density and volume are due to the space between the  molecules, which increases with temperature

∙ The result of charges, partial charges, and temporary charges interacting at  large distances If you want to learn more check out What is agrarian america?

∙ Greater distance = weaker force (this is why bonding forces are stronger –  they occur within the molecule, not between molecules)

What refers to the resistance of liquid to flow?

o Present in all molecules and atoms We also discuss several other topics like ­ what are politics?

o At any instant, one side may have a negative charge and the other  may have a positive charge. This charge separation is called temporary dipole

o Magnitude of dispersion depends on how easily the electrons move  within the molecule, which depends on the volume of the electron  cloud We also discuss several other topics like What were computers first use?

o Polar molecules have higher melting and boiling points We also discuss several other topics like What are the 10 input devices?

∙ Hydrogen bonds are intermolecular forces between polar molecules that  contain hydrogen and at least one of the following: fluorine, oxygen, or  nitrogen

o NOTE! The hydrogen bond is not within the molecule, it is between the  H, F, O, and N of different molecules

o Increasing surface area requires energy because molecules on the  inside must move towards the outside, reducing their stability We also discuss several other topics like In what way do illnesses determine our lives?

∙ Viscosity is the resistance of liquid to flow

2) adhesive forces – attraction between molecules and the surface of  the tube, which cause the liquid to spread out over the tube

the surface draws liquid up the tube and the cohesive force

pulls along the molecules not in direct contact with the walls

o Rate of vaporization increases with:

 increasing surface area – more molecules at the surface, where  vaporization is higher because they are held less tightly

PRACTICE PROBLEM 1: Calculate the mass of water that can be vaporized at boiling  point with 155kJ of heat

o In an open container, the water will convert to gas and float away; but  in a sealed container, the gas molecules remain in the container and  eventually convert back to liquid molecules

o When a system in dynamic equilibrium is disturbed, it responds in such a way to minimize the disturbance and return to equilibrium

 When a liquid reaches boiling point, thermal energy is enough  for molecules in the interior to convert to gas molecules

 100 C for water; but water can boil at a lower temperature if  pressure is lower

 Additional heating will not raise temperature, only increase  boiling rate, until all the liquid has been converted to gas

 Relationship is exponential; given by

∙ gives the relationship between the natural log of vapor

pressure and the inverse of temperature

∙ the slope of the line between the natural log of vapor

pressure and the inverse of temperature determines the

∙ Temperatures must be absolute (in Kelvin, so add 273)

o Supercritical fluids have gas and liquid properties, and are good  solvents

∙ Sublimation = solid to gas transformation (molecules with high enough  thermal energy break free of the surface and go straight to gas state o Opposite is deposition. Molecules collide with the surface and are  captured by intermolecular forces, going from gas to solid.

∙ Fusion = solid to liquid transformation (aka melting). Increasing temperature  causes molecules to vibrate faster and overcome the intermolecular forces  that hold them in place

o Opposite is freezing.

o Ice is warmed (temperature increases) but there is no phase change o Amount of heat required to heat the ice is mC∆T, where m is mass, C is specific heat capacity of ice, and delta T is change in temperature

o Adding heat does not change the temperature of the ice and liquid  mixture because added heat is used to transition from solid to liquid o Amount of heat required to convert ice to liquid water is given by q=  n∆Hfus where n is the number of moles and ∆Hfus is the heat of fusion o Heat of fusion for water is 6.02 kJ/mol

o Here, temperature of the liquid increases and there is no change of  state.

o Amount of heat required to heat the liquid is mC∆T, where m is mass, C is specific heat capacity of liquid, and delta T is change in temperature Ex. How much heat is required to raise 18 g of water from 0 C to 100  C?

o Heat of vaporization for water is 40.7 kJ/mol

o Amount of heat required to heat the steam is mC∆T, where m is mass,  C is specific heat capacity of steam, and delta T is change in  temperature

o O – H bonds allow it to form strong hydrogen bonds with other  molecules, giving it a high boiling point

o Ice is less dense than water, which is why it floats

∙ A phase diagram is a map of the state or phase of a substance as a function  of pressure (on the y axis) and temperature (on the x axis). Made up of: o Regions – conditions where that particular state is stable (solid, liquid,  or gas)

∙ Changes in temperature and/or pressure is movement within the diagram

o Crystalline solids are composed of atoms or molecules arranged in  structures with long range orders, with spaces between the atoms.  Light of similar wavelengths form diffraction patterns when it interferes with the atoms

o Braggs Law – for a given wavelength of light, we can measure the  angle that produces constructive interference and calculate the  difference between atomic layers

∙ Arranged in a crystalline lattice to minimize the energy of particles

o Lattice structure is created when the unit cell (collection of atoms, ions, and molecules) repeats over and over again

atom is in direct

(% volume of the structure occupied by the 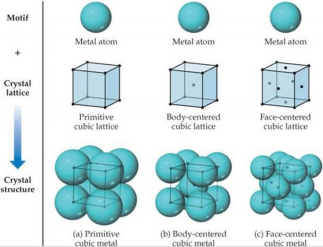 ∙ Edge length can be used to calculate density and volume

PRACTICE PROBLEM 1: Palladium crystallizes in a face-centered cubic unit cell. Its  density is 12.023 g/cm3. Calculate the atomic radius of palladium.

1. Calculate the average mass of one atom of Pd:

2. Calculate the mass of the 4 palladium atoms in the face-centered cubic unit cell:

3. Use density to get the volume of the unit cell:

4. Determine the edge length of the unit cell:

Remember that a face-centered unit cell has an atom in the middle of  each face of the cube. The square represents one face of a face centered cube:

Using the Pythagorean Theorem, we find:

a) What is the density of solid krypton?

b) What is the atomic radius of krypton?

c) What is the volume of one krypton atom?

atom is treated as a hard sphere?

2) Calculate the volume of the unit cell:

3) Calculate the average mass of one atom of Kr:

4) Calculate the mass of the 4 krypton atoms in the face-centered  cubic unit cell:

1) Calculate the volume of the 4 atoms in the unit cell:

2) Calculate volume of cell not filled with Kr:

 Think of crystal structures as layers upon layers of atoms   Simple unit cubic structures are not efficient at packing because  they have square packing, which leaves a lot of room between  atoms:

 Hexagonal Closest Packing is one way to increase efficiency:  align neighboring rows of atoms slightly off center from each  other and put them directly on top of each other. Pattern is ABAB 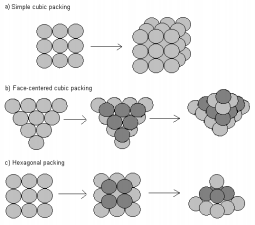 o held together by intermolecular forces

o tend to have low to moderately low melting points

∙ Noble gases in their solid form are the only nonbonding

∙ Held together by metallic bonds (interaction of metal

cations with the sea of electrons that surrounds them) of

∙ Held together by covalent bonds

∙ Structures are restricted by geometrical constraints of the

∙ Similar structures to that of unit cells designed to:

o accommodating both charges so the solid is neutral

o accommodates the sizes of the cations and anions

∙ Cations and anions in the solid attract each other

o The more similar the radii of the cation and anion, the higher the  coordination number

beneath each corner atom

o Many with a cation: anion ratio of 2:1 take on the antifluorite structure

beneath each corner atom

 Bond length between atoms within a sheet is 142 pm

 Separation between sheets is 341 pm; no covalent bonds, only  dispersion forces

 electrons are not free to flow, so it is not a good conductor of  electricity

 Held together by dispersion forces

o Silicates are extended arrays of silicon and carbon

What does ontology study?

What are polymers examples?