Course: Principles of Biology I

Description: This study guide is for our exam Friday February 3rd, 2017. It covers the topics discussed both in class and in the book!

I) Molecules and Interactions:

∙ Parts of an atom:

What are the chemical bonds between the six most common elements?

∙ Isotope – a form of the same element that contains the same number of protons as the original element, but a different number of neutrons

o For example, C-12 and C-14 are isotopes of carbon, but respectively have 6  neutrons and 8 neutrons

o Ionic bonds → formed between ions with opposite charges

o Polar covalent → one side of the molecule is more positively charged, while  the other side is more negatively charged If you want to learn more check out poll everywhere ucr

o Non-polar covalent → bonds between two atoms that share electrons equally ∙ What are the chemical bonds between the six most common elements? o Hydrogen likes to form single bonds with other atoms

 Bonds between hydrogen and other elements tend to be polar

 Because carbon forms 4 bonds to fill its octet, molecules bonded with  carbon tend to be nonpolar

Don't forget about the age old question of which early perspective in psychology associated with william james focused on how the mind allows people to adapt, live, work, and play?

 Can form up to 5 covalent bonds

∙ Polar bonds make it easier for compounds to dissolve in water

o If a molecule contains multiple polar bonds, it is highly likely that molecule  will be able to dissolve in water

o Ionic bond – bonds formed between ions of opposite charges, in which the  opposite charges are attracted to one another We also discuss several other topics like lab practical biology

o Hydrogen bond – attractions between a polar hydrogen and an

electronegative atom such as N or O

∙     Why do interactions between water molecules differ in its different states? o Ice – the water molecules are packed close together, preventing it from  changing shapes

 When the temperature decreases and water freezes, the molecules  space out and become crystallized

o Water vapor – as the temperature of water increases, the hydrogen bonds  are broken, allowing water molecules to escape into the gas phase and move freely

∙ Condensation – the process in which vapor is converted from a gas to a liquid,  caused by a change in pressure or temperature

∙ Hydrophobic → polar molecules that interact and dissolve in water

∙ For a substance to dissolve in water, the attraction between the solvent and solute  particles must be greater than the forces holding the individual solute particles  together

∙    What are the physical properties of the following chemical bonds?

∙ What are the major functional groups and their properties?

∙ Monomers are small subunits that covalently bond to form polymers, which are  larger molecules, in a process known as dehydration synthesis

o When monomers combine with one another, they release a water molecule o Hydrolysis is the process of rehydrating a polymer by adding a water  molecule, thus breaking up the polymer into monomers

∙ Carbs are polar and hydrophilic, meaning they soluble in water

∙ Cholesterol – the most common sterol; a lipid made up of four interlocked carbon  rings known as steroids

 Because of this property, phospholipids can form certain structures

when added to water to help lipids dissolve in water 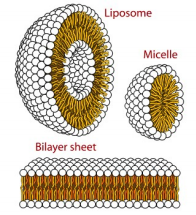 and lipid molecules that

curls around on itself to

∙ Micelle – a single layer of

o As lipids are transported throughout the body they are surrounded by  phospholipids bilayers that form a protective covering around the lipid,  separating it from the surrounding water and helping it dissolve

∙     Why does your body choose one molecule over another even though the two  molecules have the same chemical formula?

o Even though compounds may have the same chemical formula, they can  have different molecular structures and shapes

∙    What are the levels of protein folding?

o Must be anti-parallel to one another (3’s must connect to 5’s and vice versa) ∙ Whether a protein is polar depends on its R group:

∙    How can the category an amino acid belongs to influence the structure and  behavior of a protein?

o The R group (a side chain attached to the amino acid) determines the  characteristics of a protein, such as size, polarity, and pH

∙ pH – a measure of the strength of the acid or base of a substance o pH chemically represents the power of hydrogen in a solution and can be  determined by the following formula:

o pOH chemically represents the power of hydroxide in a solution and can be  determined by the following formula:+¿

 The reaction is as follows:

∙    Why can water act as both a weak acid and a weak base?

∙ As the [H+] concentration increases the pH becomes more acidic, the carboxyl  groups accept protons and their charges increase

∙ As a cube or sphere increases in size, its volume increases at a greater rate than  its surface area

o Changes in surface area and volume affect functions performed in organisms o Increased surface area means increased exposure to surroundings  ∙    How is membrane transport used to transport nutrients into the cell and waste out  of the cell?

o Nutrients are found in carbs, lipids, and proteins and they are absorbed into  our bodies through digestion, which involves breaking down complex  polymers into simpler monomers for easier absorption

∙ To examine protein production, you could use an isotope of carbon, hydrogen,  sulfur, nitrogen, and oxygen, as these molecules are all present in protein  ∙     How does membrane function limit cell size?

o As cell size increases, the risk of damage to the cell membrane also  increases

 The cell membrane is very flexible, yet it is still fragile in regards to its  surroundings

 Some cells can overcome this by having more than one nucleus

o Within the nucleus, DNA becomes translated into mRNA during transcription  so that it can exit the nucleus and enter the rest of the cell

o This protein travels through the rough ER and into the smooth ER, where it  pinches off within a vesicle so that it can travel to the Golgi body

o Once attached to the cell wall, the protein exits both the vesicle and the cell  and is used for purposes outside the cell

o DNA is converted into mRNA during transcription

o Once attached to this ribosome, translation occurs and the mRNA is  translated into a protein

o Once protein synthesis is complete, the protein is used for purposes within  the cell

∙ Only in bacteria and cyanobacteria ∙ Single circular chromosome

∙ In plants, animals, and fungi

∙ The cytoskeleton is a network of proteins that maintain the shape of the cell,  secure organelles, and allow cytoplasm, vesicles, and cells within multicellular  organisms to move

o What are the three types of fibers within the cytoskeleton?

 ii) Intermediate Filaments – important in structure only; maintain the  shape of the cell and keep organelles in place

 iii) Microtubules – widest component; provide a track for the vesicles to move and pull replicated chromosomes to opposite ends of the cell

∙ Flagella – long, hair-like structures that extend from the plasma membrane to  move the cell

∙ Cilia – short, hair like structures that extend along the outer surface of the cell ∙ The extracellular matrix is a non-cellular component in all tissues and organs that  determines how a tissue looks and functions

o Made of collagen fiber that are interwoven with proteoglycans