How do winds blow about low and high pressure systems in the Northern Hemisphere?

How is wind direction defined?

﻿What is the difference between satellites and radars?

What is pressure and how does it change with height?  Pressure = (Weigh or Force) / Area  Units : mb, lb/in2, in Hg  Pressure always decreases with height — because there is less atmosphere (weight of air) above.  What is an inversion?  Inversion : the layer in which the temperature increases with height

What is latent heat?  Latent heat : energy absorbed/released during a phase change (“hidden” energy)  What is advection?  Advection : transfer of heat (or moisture) through horizontal movements of air  i.e. sea or lake breeze  What is saturation? What mathematical relationships are true at saturation?  Saturation : the water vapor concentration in the air at which evaporation rate = condensation rate At saturation, RH = 100% What is relative humidity? How can it be changed?  Relative humidity : the ratio of vapor pressure (VP) to the saturation vapor pressure (SVP) To increase RH  - Add moisture to the air (increase VP)  - Cool the air (decrease SVP)  To decrease RH  - Remove moisture from the air (decrease VP)  - Warm the air (increase SVP)  What is dewpoint? Why is it useful?  Dewpoint temperature : the temperature at which saturation occurs  Higher dewpoint always means that there is more moisture in the air.  dewpoint temperature = temperature  How do clouds form?  Most clouds form in rising air.  1. As air rises, it expands and cools.  2. Amount of water vapor in the air doesn’t change as air rises.  3. As temperature of the air decreases, its relative humidity increases.  4. Air eventually rises high (gets cold) enough to become saturated (RH = 100%).  5. When air saturates, a cloud forms.  Clouds are made of billions of small water droplets. How do you read a station model? 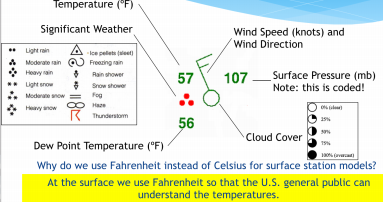 Know the location of the 50 US states, oceans, and the Rocky and Appalachian Mountains. 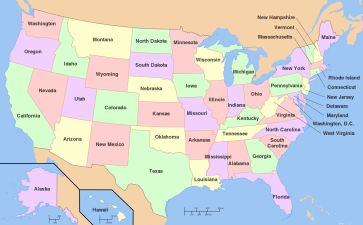 How are convergence and divergence related to the development of surface lows and highs?  Surface lows  - divergence causes surface pressures to fall - air converges into low pressure systems at the surface  Surface highs  - convergence causes surface pressures to rise - air diverges into high pressure systems at the surface

What is an air mass? How are they classified?  Air mass : a large body of air with similar temperature and moisture concentrations in the horizontal  Classified by  Moisture - Continental (c) : dry (forms over land)  - Maritime (m) : moist (forms over water)   Temperature  - Tropical (T) : warm/hot  - Polar (P) : cool/cold  - Arctic (A) : frigid  cT — dry & hot  cP — dry & cold  cA — dry & frigid  mT — moist & warm  mP — moist & cool  What is a front?  Front : the transition zone between two distinct air masses  How are fronts represented on weather maps?  Triangles and semi-circles that point to the direction that the front is moving  Cold front : winds in cold air blow toward the front  Warm front : winds in cold air blow away from the front  Stationary front : winds in cold air blow parallel to the front

What is a dryline?  Dryline : a boundary that separates warm & dry air from war & moist air

- Usually represents a zone of instability along which thunderstorms form  What is a mid-latitude cyclone?  Mid-latitude cyclone : a cyclonic storm that most often forms along a front in middle and high latitudes - a.k.a. extratropical cyclone, depression, low Where is warm air and cold air found with respect to a surface low?  - Brings warm air northward - Brings cold air southward How do mid-latitude cyclones influence the weather?  - Showers & thunderstorms may form along the cold front - Light-to-moderate precipitation to N of the warm front - Heavy snow (possibly blizzard) to NW of the surface low LECTURE 17  What is the Gulf Stream?  Gulf Stream : an intense, warm ocean current in the western North Atlantic Ocean  What is the thermocline?  Thermocline : rapid temperature decrease with depth a few hundred meters below the surface

How do Groups Make Decisions?