Description: These notes covered what was on the first exam.

Why is Speciation by Polyploidy is Common in Plants?

How Can Polyploidy Lead to Speciation?

How to identify a species? 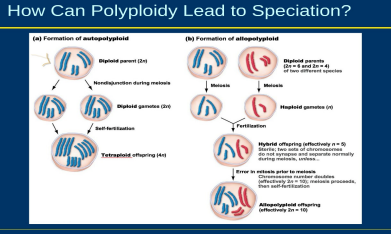 Why is Speciation by Polyploidy is Common in Plants? 1. In plants, somatic cells that have undergone many rounds of  mitosis can undergo meiosis and produce gametes. The  multiple rounds of mitosis increase the likelihood of  tetraploid daughter cells 2. The ability of some plant species to self-fertilize makes it  possible for diploid gametes to fuse and create genetically  isolated tetraploid populations 3. Hybridization between plant species is common, creating  opportunities for speciation via formation of allopolypoids  ∙ To summarize, speciation by polyploidization is driven by  chromosome-level mutations and occurs in sympatry ∙ Compared to the gradual process of speciation by  geographic isolation or by disruptive selection in  sympatry, speciation by polyploidy is virtually  instantaneous. It is fast, sympatric, and common

Chapter 24: When Isolated Populations Come in Contact When Isolated Populations Come into Contact ∙ What happens when isolated populations of related species  come back into contact depends on many factors, but most  importantly on whether the populations have diverged  genetically or not o Closely related sympatric species will seldom mate with one another in the lab o Allopatric species are often willing to mate with one  another in the lab ∙ If two populations have diverged and if divergence has  affected when, where, or how individuals in the populations  mate, prezygotic isolation exists ∙ In cases such as this, mating between the populations is  rare, gene flow is minimal, and the populations continue to  diverge ∙ When prezygotic isolation does not exist, populations may  successfully interbreed o Gene flow then occurs and may erase distinctions  between the two populations ∙ Other possible outcomes include reinforcement,  development of hybrid zones, and speciation by  hybridizationReinforcement ∙ If two populations have diverged extensively and are distinct genetically, it is reasonable to expect that their hybrid  offspring will have lower fitness than their parents o The logic here is that if populations are well-adapted to  different habitats, then hybrid offspring will not be well adapted to either habitat ∙ When postzygotic isolation occurs, there is strong natural  selection against interbreeding ∙ Selection for traits that isolate populations reproductively is  called reinforcement  Hybrid Zones ∙ Sometimes the hybrid offspring of related species possess  traits that are intermediate between the two parental  populations, and they are healthy and capable of breeding ∙ A geographic area where interbreeding between two  populations occurs and hybrid offspring are common is  called a hybrid zone o Example of this is seen with warblers ∙ Hybridization often leads to extinction but sometimes leads  to the origination of a new species

Explain what's in the carcass category.

how is consumer panel data collected during the test marketing phase of a new product introduction?