WPI / Economics / ECON 1120 / What are the possible reason behind a shift of the supply curve?

What are the possible reason behind a shift of the supply curve?

What are the possible reason behind a shift of the supply curve?

What is the factors of production?

● illustrates the trade-offs facing an economy that produces only two goods. ● shows the maximum quantity of one good that can be produce for any given quantity produced of the other.

What is price index?

We also discuss several other topics like Communism idea is to get rid of what?

A: feasible but not efficient

B: feasible and efficient in production

*opportunity cost: what must be given up in order to get that good

● Factors of production: resources used to produce goods and serivces ● Technology: the technical means for producing goods and services

What is the natural rate of unemploymen?

The quantity demanded is the actual amount of a good or service consumers are willing to buy at some specific price. Don't forget about the age old question of What happens when prb disrupted?

A shift of the demand curve: a change in quantity demanded at any given price. Reasons:

● Changes in prices of related goods or services

depends on the trends of consumption on the goods

● Changes in the number of consumers

# of consumers increase, demanded increase, curve shift to the right

The quantity supplied is the actual amount of good or service people are willing to sell at some specific price.

A shift of the supply curve: a change in the quantity supplied of a good or service at any given price.

● Changes in the prices of related goods or services If you want to learn more check out How the government rules?

● Changes in the number of producers

# of producers increase, supplied increases, curve shift to the right If you want to learn more check out What purpose did such imaginary and idyllic scenes serve for their audience in europe?

Self-regulating economy: problems such as unemployment are resolved without government intervention, through the working of the invisible hand.

Keynesian economics: economic slumps are caused by inadequate spending, and they can be mitigated by government intervention.

*Monetary policy: changes in the quantity of money to alter interest rates and affect overall spending

*Fiscal policy: changes in government spending and taxes to affect overall spending *Recessions (contractions): are periods of economic downturn when output and emploment are falling.

● unemployment rate indicates the condition in the labor-market

● tends to fall when the economy is depressed and jobs are hard to find *Deflation: a falling overall level (aggregate price level)

The economy has price stability when the overall level of prices changes slowly or not at all. In the long run, the overall level of prices is mainly determined by changes in the money supply, the total quantity of assets that can be readily used to make purchases. *Disinflation: the process of bringing the inflation rate down. (opposite of inflation) *A open economy is an economy that trades goods and services with other countries. *Trade deficit (surplus): the value of goods and services bought from foreigners is more(less) than the value of goods and services it sells to them. 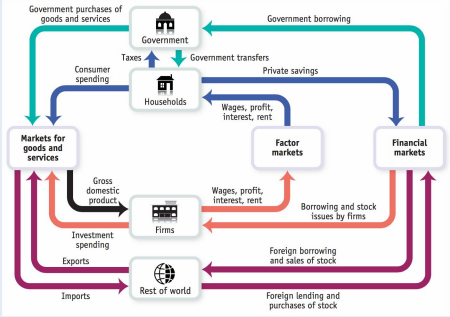 *GDP (Gross domestic product): is the total value of all final goods and services produced in the economy during a given year.

*Real GDP: the total value of all final goods and services produced in the economy during a given year, calculated using the prices of selected base year

*Nominal GDP:the value of all final goods and services produced in the economy during a given year, calculated using the prices current in the year in which the output is produced. *GDP per capita: GDP divided by the size of the population; it is equivalent to the average GDP per person. It is not a sufficient measure of human welfare, nor is it an appropriate goal

in itself, because it does not reflect important aspects of living standards within an economy. Calculating GDP:

1.adding up the total value of all final goods and services produced

*Price index measures the cost of purchasing a given market basket in a given year, where that cost is normalized so that it is equal to 100 in the selected base year.

Calculation of inflation rate: the percent change per year in a price index, typically the consumer price index.

*Employment: the number of people currently employed in the economy , either full time or part time.

*Unemployment: the number of people who are actively looking for work but aren’t currently employed.

*Labor force participation rate: the percentage of the population aged 16 and older that is in the labor force.

Labor force participation rate = (labor force)/(population aged 16 and older) *100% *Unemployment rate: the percentage of the total number of people in the labor force who are unemployed

unemployment rate = (# of unemployed workers)/(labor force) * 100% ● It always rises during recessions. It usually but not always, falls during expansion. It is a good indicator of how easy or difficult it is to find a job given the current state of the economy, but not a literal measure.

● Overstate the true level of unemployment

People who still looking for a job that is suitable / accepted is counted as unemployed. ● Understate the true level of unemployment

a. Discourage workers are non-working people who are capable of working but have given up looking for a job given the state of the job market.

b. Marginally attached workers would like to be employed and have looked for a job in the recent past but are not currently looking for work.

c. Underemployment is the number of people who work part time because they cannot find full-time jobs.

● Frictional unemployment: the unemployment due to the time workers spend in job search (a+b+c).

● Structural unemployment: the unemployment that results when there are more people seeking jobs in a particular labor market than there are jobs available at the current wage rate, even when the economy is at the peak of the business cycle.

Factors lead to a wage rate in excess of WE:

● Side effects of government policies

● Mismatches between employees and employers

*Cyclical unemployment: the deviation of the actual rate of unemployment from the natural rate due to downturns in the business cycle.

● Shoe-Leather Cost: the increased costs of transactions caused by inflation ● Menu Cost: the real cost of changing a listed price

*Interest rate on loan is the price, calculated as a percentage of the amount borrowed, that lenders charge borrowers the use of their savings for one year.

*National savings, the sum of private savings and the budget balance, is the total amount of savings generated within the economy

=Investment ---in a closed economy

=SNational+NCI ---- in an open economy

@A: only projects that are profitable at rE or higher are funded

@B: offers not accpected from lenders who demand r > rE

@C: offers accpected from lenders willing to lead at r </= rE

@D: Projects are profitablt only when the r < rE are not funded

Shifts of the Demand for Loanable Funds

Government budget deficit, shift the demand curve to the right

Shifts of the Supply of Loanable Funds

Sustained economic growth occurs only when the amount of output produced by the average worker increases steadily.

For the economy as a whole, productivity = real GDP divided by the # of people working. What leads to higher productivity?

Natural resources are less important today than physical and human capital as sources of productivity growth in most economies.

*Sustainable long-run economic growth is long-run growth that can continue in the face of the limited supply of natural resources and the impact of growth on the environment.

*Positive economics: the branch of economics analysis that describes the way the economy actually works.

*Normative economics makes prescriptions about the way the economy should work. *Economist disagree because:

● which simplifications to make in a model

What kind of exercise is good for pregnant women?

What can we see with the given light out in space?