Description: Notes from the past week and a half in class, covering mostly price indexes and unemployment 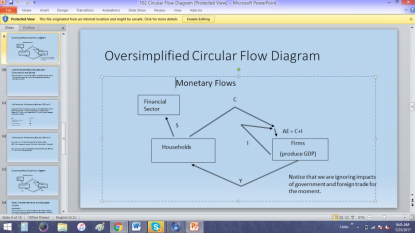 What does tr stand for in economics?

o If you want to learn more check out How can you describe the international criminal justice law?

o Transfer payments (Tr)­ the govt makes to people who are not working for the  govt (social security, for ex)

 Tax cuts can therefore increase disposable income that then enters the  economy. However, more disposable income enters the economy if you  give tax cuts for (relatively) poorer people because they really feel the  If you want to learn more check out How does society shape our individual experiences?

What does yd stand for in economics?

o Subtract this from AE because Aggregate expenditure is total spending on  domestic production, and imports are spending on foreign products

­ GDP defined­ the monetary value of all final goods and services produced within a  country’s geographical borders within one year.  Don't forget about the age old question of What is characterized by periods of irresistible sleep, cataplexy attacks, sleep paralysis, and hypnagogic hallucinations?

­ Example: an economy produces jeans, entertainment systems, and hummus sandwiches  (why. Of all sandwich types.) We also discuss several other topics like How many angels does a square have?

o If different amounts of goods are sold in Year 2 than in Year 1, but there is also  price inflation , use prices from Year 1 for Year 2 goods sold and recalculate total GDP to calculate %  change, or if the economy actually grew at all. (Or you can  recalculate Year 1 with Year 2 prices. You just need a base year and a “consistent  price yardstick.”)

­ Nominal GDP­ total value of all final goods and services valued in that year’s prices o If you’re not comparing across time, nominal works fine

o GDP statistic may not accurately reflect total economic output because of this ­  Ex.Bangladesh’s GPD per capita is not enough to live on, but that is because the GDP  doesn’t reflect the food people are growing in their garden and consuming themselves  because it’s not on the market

­ 5 problems with GDP per capita as a measure of society’s well­being o 1. Non­market production is not included (see above, GDP understates how well  off we are)

o 3. Does not reflect how unevenly or unevenly output is distributed across  population

 if one guy has 99% of GDP, GPD per capita is the same, but well­being of the average person is significantly less

o 1. Purchase of financial assets (money and legal documents entitling their holder  to money. They aren’t products, so don’t count them)

o 2. Purchases of used goods, like cars. They have already been counted when they  were initially sold. Counting the second sale would be recounting

o  Think of value­added as the value that is added to the produced intermediate  goods by the firm that uses them. Bread has more value than flour + sugar +  yeast. The difference is value­added

o Imagine you raise cattle and produce $1 worth of milk, then sell it to a processing  plant

o The processing plant adds a value of $1.50 by processing, sells to a distributor o Distributor adds value of $0.50  by making milk more accessible

 Total change in inventories is the value of everything not sold

consumption goods. Subtract imports at end of GDP equation so they

∙ Unplanned= inventory investment. This is the leftover goods that a firm produces that doesn’t get sold. It is “unplanned” because the  firm was planning on selling it. Technically this is not an

investment, but it has to be factored into GDP somewhere.

 We include foreign produced goods in Investment because they improve  the economy/ our overall efficiency and GDP, but we subtract off the  original value of the good in Imports

∙ All these equations are basically saying that the government makes money with taxes, and spends the on goods, services, and payroll  (G) as well as Social Security and Medicaid and whatnot (Tr). If  they spend more than they tax, they are in a deficit.

∙ Why include govt payroll in G? Because this is part of the cost of  providing goods and services through the govt

∙ There’s no problem with double counting by including  intermediates in exports, because the final good made by the  intermediate will be made and purchased overseas, therefore not  part of our GDP

∙ We include intermediates in Imports because the foreign content of final goods sold is not value that was produced domestically, so  subtract this value out in our GDP calculation.

∙ This equation just says that GPD is the sum of expenditures in the  economy, plus the changes in inventories (which is slipped into

­ Price Indices­ how the overall level of price is measured

­ A “price index” is used to measure the overall level of prices in the economy, or a subset  of these prices.

­ Basic idea of how it works: It measures the relative cost of a representative bundle of  goods and services (“market basket”) in the year in question to its cost in an arbitrarily  chosen base year.

o Typically you move the decimal place in that number right two in the final  representation: i.e. 0.765= 76.5

 Remember real GDP is GDP of year i calculated at a base year’s prices o Also, %change of nominal GDP= % change of real GDP + %change of GDP  Deflator

­ 2) Producer Price Index (PPI): A price index used to measure wholesale prices,  compared to the base year.  Its market basket consists of a representative sample of  wholesale prices of goods.

o Wholesale prices going up should lead to market prices going up as well o Buttttt most of what we buy is services, and there’s only a wholesale price for  goods. So PPI can rise rapidly, but it doesn’t tell us as much about the state of the  economy (and the CPI) , because services aren’t included

­ 3) The Consumer Price Index (CPI): The price index designed to measure the cost of  living, compared to the base year.  Market basket consists of a representative sample of  consumption goods and services consumed by a typical household.

­ Unemployment­ unemployment means (in the most general sense) that a person is willing to work at a market wage commensurate with his/ her skills and experience, but is unable  to find a job

o 1) Frictional Unemployment­ unavoidable, usually short­term unemployment that inevitably arises due to imperfect knowledge that workers have about where they  will find their next job

 Govt policies like minimum wage laws can also contribute to this

o 3. Side effects of govt policies

­ Remember, in the labor mkt, firms are on the demand side and households are the  suppliers. Also, the price of labor is the hourly wage.

o But the counter argument to that is low wage workers will then be spending more, stimulating the economy and allowing firms to spend more

­ If demand for labor is inelastic, and a minimum wage law is implemented, the total  income of unskilled workers rises

o Blue box is basically the same or even bigger than the yellow box, so the  minimum wage wasn’t harmful in this case

How can species evolve through natural selection?

What is fundamental attribution error in psychology?