Course: Into to Business

Description: These notes cover the first exam, chapters one through four.

11 Pages 89 Views 0 Unlocks
Reviews
CHAPTER 1 Free enterprise: ability to produce any legal goods and sell at any price  • Why take business class? o Choose career o Be more successful as an employee o Improve management  o Decide to start your own business o More informed consumer and investor Business: organizational effort of people to produce and sell goods that make a profit and are  needed by the public E-business: organized effort of individuals to produce and sell for a profit, the goods and services  that satisfy society’s needs through the facilities available on the internet Economics: study of how wealth is created and distributed Microeconomics: an individual, smaller picture Macroeconomics: national economy Economy: how people with economics • Factors of Production: resources used to produce goods and services o Land and natural resources ▪ Forests, crude oil, minerals, land, water o Labor ▪ Time and effort that we use to produce goods and services ▪ Managers and employees o Capital ($ and what you can buy to help with production) ▪ Money, facilities, equipment, and machines used in the operation of  organizations o Entrepreneurship ▪ The activity that organizes land and natural resources, labor, and capital.  The willingness to take risks and the knowledge and ability to use the  other factors of production efficiently. • Big Questions to Ask Yourself? o What and how much of the product to make? o How to produce it? o For whom to sell it to? Capitalism: economic system in which individuals own and operate the majority of businesses that provide goods and services to the public o Adam Smith o Invisible hand ▪ Coined by Adam Smith describes how an individual’s personal gain  benefits others and a nation’s economy  Laisse-faire: everyone has the right to create wealth, economic freedom and freedom to compete,  and limited government interventionMarket economy: an economic system in which businesses and individuals decide what to  produce and buy, and the market determines quantities sold and prices Mixed economy: an economy that exhibits elements of both capitalism and socialism • The USA is a mixed economy (private and government owned businesses/industries) Consumer products: goods and services purchased by individuals for personal consumption Command economy: economic system in which the government decides what goods and services  will be produced, how they will be produced, for whom available goods and services will be  produced, and who owns and controls the major factors of production Socialism: key industries controlled by government • Transportation, utilities, communications, banking, and steel production Communism: classless society whose citizens together owned all economic resources. All  workers would then contribute to the society according to their ability and would receive benefits  according to their needs. • Karl Marx • Government controls everything and makes all of the decisions Gross-domestic product: the total dollar value of all goods and services produced by all people  within the boundaries of a country during a one-year period Productivity: average level of output per worker per hour Inflation: general rise in the level of prices Deflation: general decrease in the level of prices Unemployment rate: the percentage of a nation’s labor force unemployed at any time Consumer price index: a monthly index that measures the changes in prices of a fixed basket of  goods purchased by a typical consumer in an urban area  Producer price index: index that measures prices that producers receive for their finished good Economic Measure Description Balance of trade Total value of a nation’s exports minus the  total value of its imports over a specific  period of time Consumer confidence index Measure of how optimistic or pessimistic  consumers are about the nation’s economy Corporate profile Total amount of profits made by corporations  over a specific time period Inflation rate Economic statistic that tracks the increase in  prices of goods and services over a period of  time National income Total income earned by various segments of  the population New housing starts Total number of new homes Prime interest rate Lowest interest rate that banks charge their  most credit-worthy customers

If you want to learn more check out Extra Credit why won't this mechanism work for friedel-Crafts Conditions?

Business cycle: recurrence of periods of growth and recession in a nation’s economic activity Recession: two or more consecutive three 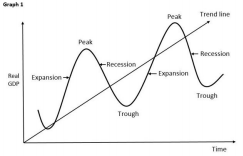 month periods of decline in a country’s GDP • Unemployment rises during a recession and total buying power declines depression: severe recession that lasts longer than a typical recession and has a larger  decline in business activity when compared to a recession  • The trough of a recession or depression is the turning point when a nation’s production  and employment bottom out and reach their lowest levels • During the peak period, the economy is at its highest point, unemployment is low and  total income is relatively high Monetary policies: federal reserve’s decisions that determine the size of the supply of money in  the nation and the level of interest rate Fiscal policy: government influence on the amount of savings and expenditures; accomplished  by altering the tax structure and by changing the levels of government spending Federal deficit: shortfall created when the federal government spend more in a fiscal year than it  receives National debt: total of all federal deficits Competition: rivalry among businesses for sales to potential customers Types of Competition Definition Real-World Example # of Business Firms Perfect (or Pure) There are many  buyers and sellers of  a product, and no  single buyer or seller  is powerful enough to  affect the price of that  product Corn, Wheat, Peanuts Many Monopolistic There are many  buyers along with a  relatively large  number of sellers  who differentiate  their products from  the products of  competitors Clothing, Shoes Many

o What and how much of the product to make?

Don't forget about the age old question of educ 200

Oligopoly Market (or industry)  in which there are  few sellers Automobiles, Cereal Few Monopoly Market (or industry)  with only one seller,  and there are barriers  to keep other firms  from entering the  industry Software produced by  copyright, many local  public utilities One • A natural monopoly, is an industry that requires a huge investment in capital and within  which any duplication of facilities would be wasteful o Permitted to exist because the public interest is best served by their existence, but  they operate under the scrutiny and control of various state and federal agencies • A limited monopoly, is created when a government entity issues a franchise, license,  copyright, patent, or trademark • The price of each product is determined by the action of all buyers and all sellers together  through the force of supply and demand 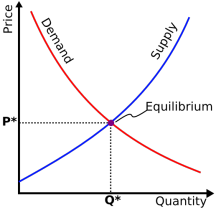 Supply: the quantity of the product that producers are  willing to sell at each of various prices Demand: quantity that buyers are willing to purchase at each  of various prices Market price: price at which the quantity demanded is  exactly equal to the quantity supplied Product differentiation: the process of developing and  promoting differences between one’s products and all  competitive products Standard of living: loose, subjective measure of how well off an individual or a society is, mainly in terms of want satisfaction through goods and services Barter: system of exchange in which goods and services are traded directly for other goods or  services without using money Domestic system: method of manufacturing in which an entrepreneur distributes raw materials or  various homes, where families process them into finished goods to be offered for sale by the  merchant entrepreneur  Factory system: system of manufacturing in which all the materials, machinery, and workers  required to manufacture a product are assembled in one place Specialization: the separation of a manufacturing process into distinct tasks and the assignment  of the different tasks to different individuals Chapter 2 Ethics: the study of right and wrong and of the morality of the choices individuals make  Business ethics: application of moral standards to business situations • Ethical issues often arise out of a business’s relationship with investors, customers,  employees, creditors, suppliers, or competitors  1. Fairness and honesty  a. Besides obeying all laws and regulations, businesspeople are expected to  refrain from knowingly deceiving, misrepresenting, or intimidating others 2. A businessperson may be tempted to place his or her personal welfare above the  welfare of others or the welfare of the organization  3. Conflict of interest  a. A businessperson takes advantage of a situation for his or her own personal  interest rather than for the employer’s interest b. May occur when payments and gifts make their way into business deals  4. Business communications, especially advertising, can present ethical questions a. False and misleading advertising is illegal and unethical, and it can infuriate  customers 5. Individual factors  a. personal knowledge, values, and goals b. How much an individual knows about an issue is one factor c. The types of personal goals an individual aspires to and the manner in which  these goals are pursued have a significant impact on that individual’s behavior  in an organization  6. Social factors a. Cultural norms, actions, and decisions of coworkers, values and attitudes of  “significant others”, and the use of the internet  7. Opportunity a. The amount of freedom an organization affords an employee to behave  unethically if he or she makes that choice b. The degree of enforcement of company policies, procedures, and ethical codes  is a major force affecting opportunity c. When violations are dealt with consistently and firmly, the opportunity to be  unethical is reduced  Sarbanes-Oxley Act of 2002: provides sweeping new legal protection for employees who report  corporate misconduct  Trade Associations’ Role in Encouraging Ethics  • Trade associations can and often do provide ethical guidelines for their members • Organizations which operate within particular industries, are in an excellent position to  exert pressure on members to stop engaging in questionable business practices that may  harm all firms in the industry  • Enforcement and authority vary from association to association • Trade associations exist for the benefit of their members, harsh measures may be self defeating• Trade associations must also ensure that their codes to not contain provisions that may  run afoul of antitrust laws  Code of ethics: guide to acceptable and ethical behavior as defined by the organization  • Outlines uniform policies, standards, and punishments for violations Whistle-blowing: informing the press or government officials about unethical practices within  one’s organization  • Those who “blow whistles” may face retaliation and sometimes even lose their job Social responsibility: recognition that business activities have an impact on society and the  consideration of that impact in business decision making  Corporate citizenship: adopting a strategic approach to fulfilling economic, environmental, and  social responsibilities  Economic model of social responsibility: the view that society will benefit most when business is  left alone to produce and market profitable products that society needs Socioeconomic model of society: concept that business should emphasize not only profits but  also the impact of its decisions on society Consumerism: all activities undertaken to protect the rights of consumers The Basic Rights of Consumerism Definition Right to Safety The products they purchase must be safe for  their intended use, and include thorough  explicit directions for intended use Right to Be Informed Consumers must have access to complete  information about a product before they buy it Right to Choose Consumers must have a choice of products  offered by different manufacturers and sellers  to satisfy a particular need Right to Be Heard Someone will listen and take appropriate  action when customers complain Right to Consumer Education Entitles people to be fully informed about  their rights as a consumer Right to Service Entitles consumers to convenience, courtesy,  and responsiveness from manufacturers and  sellers of consumer products

o For whom to sell it to?