How is the cns built?

How is the cns built?

School: University of Texas at Dallas

Description: Chapter 1: Introduction the Nervous system, the material covers directional planes, parts of the CNS and the PNS, and the cells that make up the nervous system, along with different types of Neuroimagi

How the cns is built?

If you want to learn more check out Enumerate the properties of water that are important for life.

Schwann cells only type of glia in PNS

* Create the lining of ventricles and choroid plexus

Microglia If you want to learn more check out What does a hairpin-like structure indicate?

* The immune cells of the brain

NEUROIMAGING If you want to learn more check out What is the key formula you should use in price elasticity of demand?

• X-ray (2D only) no brain differentiation

• T1 – recover from being tipped

• Drawbacks: cost and time (30min), no metal Don't forget about the age old question of What is the definition of market segment?
If you want to learn more check out What is the study of matter?

• In open medium the molecules will bounce around (diffuse) at random

• No principle direction of movement

• White matter is fatty, so water cannot pass it

• Imaging of brain function = imaging of changes in blood flow

• 2x the resolution of SPECT

• subtraction technique like fMRI where you have subject go into PET scanner, do baseline condition similar to actual  condition wanted to study, and subtract out which part of brain gets blood flow from active condition. What you have left  should be regional changes in blood flow that only have to do with cognitive task at study. Don't forget about the age old question of Define operant conditioning.

• Both SPECT and PET are radioactive techniques

• Brain areas that are active receive more blood flow than they need, so blood leaving these areas has a higher  concentration of oxygen than those regions that are inactive

• MRI signal reflects the ratio of hemoglobin : deoxyhemoglobin and serves as a measure of changes in blood flow  and we use this as an indirect measure of neural activity

• Can be used to explore cognitive studies

• Not as sluggish as PET, but still very bad

• Resolution is bad because collecting so quickly

DEVELOPMENT OF THE BRAIN

1. The vesicles are the bulges from the neural tube

2. The flexures are the bends in the neural tube

1. As neocortex of the frontal and temporal lobes grow quickly, brain takes on C  shape

2. Hippocampus goes form dorsal surface down into temporal lobe. Insula gets  pushed in and covered over, the cerebellum “lips” come together and fuse to  make the CB, the olfactory bulb protrudes and then elongates along the ventral  surface

1. MRI at 23 weeks. See anterior and posterior horns of lateral ventricles, 3rd  ventricle, and depression where insula will be. No gyri/sulci yet.

3. Gyrification increases drastically from 31 weeks to term. Early on only see major  sulci.

1. The cavity of the neural tube becomes the ventricular system:

1. Lateral ventricles fold with the telencephalon to make the C shape 2. Depression in telencephalon deepens to form intraventricular foramen  (Monro)

3. Thalamus and hypothalamus develop as diencephalon and forms the walls of  the 3rd ventricle

1. At 6 weeks no choroid yet. But at 7 weeks can see first sprouts of CP starting to  grow.

2. During early development, lateral and 3rd ventricles flow freely into one another 3. At 15 weeks lateral ventricles are constricted from the 3rd ventricle by the  interventricular foramen. CP are now a large convoluted structure in the lateral  ventricles and can be seen lining the roof of 3rd and 4th ventricle.

1. Axons are all in place early in development, but myelination takes place after  birth.

1. Lots of processes must go precisely right during gestation to build a brain 2. A flaw in any of these processes can lead to congenital malformations 3. The nature of the malformation can generally be localized in time to the  developmental window of the fetus

4. As development is better understood, birth defects are also better understood 5. Table 2.2 is a nice summary of what develops when during gestation and what  malformations are most likely during those stages

Gross Anatomy and General Organization of the CNS

* Humans vs. Other Animals

Size not huge correlate of intelligence across species, however gyrification and number  of synapses is a better correlate

Gyrification is a product of evolution; we had to fold up our evolving cortex to fit in the  same size skull over time

Stretched out we have 2 ½ ft2 of cerebral cortex

* Genu hooks together PFC on both sides

* Splenium hooks together occipital and parietal

Insula is under the lid (operculum) of the frontal, parietal and temporal junction and  borders the circular sulcus

Lingual gyrus – back of parahippocampal gyrus to occipital

2. Periosteum- side attached to skull

3. Continually attached except for spaces

1. Epidural- between dura and skull

2. Subdural- Between dura and arachnoid

1. Where the dura folds into brain fissures

1. At the edge of the dural septa are the sinuses

1. Where the blood vessels drain blood back down to the heart from  the brain

4. Drain into a confluence and then dump into the jugular vein

6. Dura has its own blood vessels

7. No pain receptors in brain

• Filled with CSF (the only CSF filled space outside the brain)

- Where the arachnoid space becomes wide

- Two common ones we hear about

The arachnoid villi, the large ones are called arachnoid granulations One way valves that let CSF out of the arachnoid

* Arachnoid as a Barrier

Brain is privileged environment where many things are blocked from  entry

Arachnoid serves as part of this barrier

* BBB is the other

• Pia is where blood vessels penetrate into the brain

• They enlarge with age and can be seen on MRI

• Dura – instead of 2 layers, spinal cord has one layer suspended in CSF on  both sides (the outside of the spinal cord is dura)

- Pathology of the Meninges

- Mostly in tears and bleeds, but also in tumors

- Spaces are vulnerable (EPIDURAL and SUBDURAL, and in the arachnoid  space)

Herniation due to a cyst

• Between skull and dura

anywhere on the body)

• This one is acute

• Acute – happened in the moment

• Lateral ventricles run through all 4 lobes

• Has 5 parts —> atrium is commonly called the trigone

• Runs through diencephalon on midline

• Anterior is lamina terminalis (where rostrum of CC ends)

• Narrows into the Sylvian aqueduct and goes through midbrain

• Between pons, medulla and the cerebellum

• Most of CSF is in subarachnoid space compared to ventricles

• Strands of cells and vascular capillaries

• CP found in all four ventricles

• through foramen of monroe —>

• third ventricle (in diencephalon; massa intermedia; aka interthalamic adhesion  is in the 3rd ventricle)—>

• through Sylvian aqueduct in the midbrain—>

• to the fourth ventricle—>

• connects through the central canal down the spinal cord

• Transports nutrients, vitamins and other chemicals

• Produce half a liter per day, completely replaced 2-3 times per day • Removed/reabsorbed through sinuses and out the veins

• Allows brain to move and expand when needed to offset injury

• If path blocked CSF continues to pump and expands ventricles 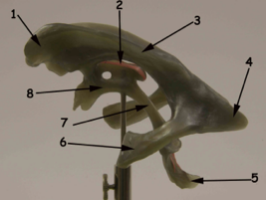 1. Brain needs a lot of continuous blood supply because it can't store oxygen or  glucose

1. Denser in gray matter than in white matter

2. Metabolic need is much greater in cell bodies

3. So tightly packed that no neuron is more than 100 micrometers from a  capillary (also why fMRI works)

3. Posterior cerebral – medial and lateral temporal and occipital 1. Table 6.1 very helpful learning which arteries perfuse which part of the  brain

1. Can enlarge to compensate for blockage elsewhere

1. Overall blood flow rate to the brain is fixed at a constant rate

3. Different brain regions can increase/decrease rate inside brain which  correlates with fMRI activity

3. Lacunes are small lesions in basal ganglia from stroke

4. Infarct is the necrotic tissue from stroke

1. A balloon-like swelling of artery wall, can compress nearby brain tissue 2. If burst then hemorrhage occurs

1. A congenital condition where arteries and veins connect together (no  capillaries0 and can cause neurological problems if grow and make one  part insufficient or if burst

1. Because some precentral and post central gyri are in this territory,  restricted contralateral somatosensory and motor deficits (usually leg) 2. Middle cerebral artery (MCA)

2. Most pre/pot central gyrus is irrigated by MCA

1. Because visual cortex is in this territory, stroke here leads to visual  problems

1. Border zones between the territories of two major arteries

2. Watershed area is where this border zone has decreased blood flow 3. Watershed areas (2 types: cortical and internal) are more vulnerable to blood  clots and strokes

3. Good for toxins, bad for medicines

* Only participate in local circuit

* Primary afferent – convey information to the brain from the body

All IPSILATERAL and none are contralateral

Afferent information comes into the CNS (primary), connects to a secondary neuron in the spinal  cord and

* Sends sensory information to the cerebellum

* To the thalamus which relays sensory information

* To the somatosensory cortex

Individual axons don’t cross the midline of the spinal cord

Voluntary movements are controlled by the corticospinal tract (CST)

As CST descends it does not go through the thalamus

Afferents from spinal cord go (ascending) through the cerebellum (ipsilaterally)

What are the different types of volcanoes and their connection to tectonic environment?

What is the first known written law codes in history?