characteristics that start with m

characteristics that start with m

Course: Intro to Probability and Statistics

12 Pages 160 Views 1 Unlocks
Reviews
Chapter 1: Exploring Univariate Data Section 1.1: Types of Data  ∙ Relevance of statistics - Statistics is used to gather and analyze data for any discipline  - Statistics is used to analyze surveys ∙ What is Statistics? - Statistics is used to make intelligent decisions in a world full of  uncertainty  “A knowledge of statistics provides the necessary tool to  differentiate between sound statistics conclusions and  questionable conclusions.” - Statistics is the science of collecting, organizing, and interpreting  numerical facts which we call data ∙ What is “Data”? - Statistics is the science of collecting, organizing and interpreting  numerical facts which we call data  The facts and figures collected, analyzed, and summarized for presentation and interpretation  Amount of your last purchase at a grocery store   The number of times that you access a certain website  Your name ∙ Types of Data:  - Population Data is everything or everyone we want information  about  It is a set of data that consists of all possible values pertaining to a certain set of observations or an investigation - Sample Data is a subset of the population that we have information  from  It is just a small section of the population taken for the  purpose of investigation ∙ Examples of Types of Data - Identify the population and the sample for each of the following:  University of Houston is interested in how many students buy  used books as opposed to new ones. They randomly choose  100 students at the student center to interview. o Population – All UH Students o Sample – 100 Students Samples  An elementary school is creating a new lunch menu. They  send questionnaires to students with last names that begin  with the letter M through R.  o Population – All students at this school o Sample – Students with last names that start with M  through R∙ A variable is a characteristic of an individual that can assume more  than one value - Variables can be classified as categorical (qualitative) or  quantitative (numeric).  Categorical variables – describe qualities or characteristics  that data may have o They usually represent a “type of something” such as a  type of car.   Quantitative variables – are measurements  o These will be numeric values ∙ Quantitative variables can be classified as either discrete or  continuous - Discrete quantitative variables – a countable set of values   For example: the number of lives given in a single play of a  video game - Continuous quantitative variables – data that can take on any  values within some interval   For example: the amount of time you wait in line at the  drivers license office ∙ Example: Classify the following variables as categorical or quantitative. - If quantitative, state whether the variable is discrete or continuous.  dPolitical preference o Categorical   Number of siblings o Quantitative - Discrete  Blood type o Categorical   Height of men on a professional basketball team  o Quantitative – Continuous   Time it takes to be on hold when calling the IRS at tax time o Quantitative – Continuous  Section 1.2: Mean and Median ∙ One question we want to answer about data is about its location,  particularly the location of its center. - Mean – is denoted with the Greek letter µ when referring to the  population mean and with the symbol ´x when referring to the  sample mean   Most common measure of center  Arithmetic average  We find the mean by adding up all the values and dividing by  how many.

∙ And the population standard deviation is σ = √σ2∙ Most of the time we are not working with the entire population.  - Instead, we are working with a sample.  Sample variance –

What is the median of the data?

What is the mean of the data?

∙ What is Statistics?

 A dot plot is made simply by putting dots above the values  listed on a number line. Dotchart(x) 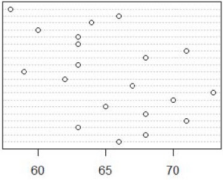 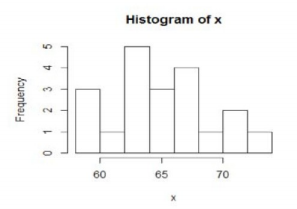  Boxplots not only help identify features about our data  quickly (such as spread and location of center) but can be  very helpful when comparing data sets.

o How to make a box plot:  Order the values in the data set in ascending  order (least to greatest).  Find and label the median.  Of the lower half (less than the median—do not  include), find and label Q1.  Of the upper half (greater than the median—do  not include), find and label Q3.  Label the minimum and maximum.  Draw and label the scale on an axis. Plot the five number summary.  Sketch a box starting at Q1 to Q3.  Sketch a segment within the box to represent the  median.  Connect the min and max to the box with line  segments. o Note: If data contains outliers, a box and whiskers  plot can be used instead to display the data.   In a box and whiskers plot, the outliers are  displayed with dots above the value and the  segments begin (or end) at the next data value  within the outlier interval.  A pie chart is a circular chart, divided into sectors, indicating  the proportion of each data value compared to the entire set  of values.  o Pie charts are good for categorical data.

 A cumulative frequency plot of the percentages (also called an ogive) can be used to view the total number of events that  occurred up to a certain value. o Example: Here is an ogive for Hudson Auto Repair’s cost of parts sold: 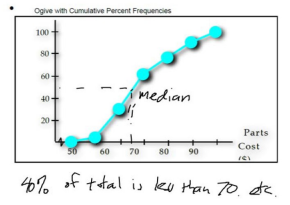 - Some other features - Bell Shaped