Description: All pages filled with detailed lecture notes since day 1 of class.

The product of the cumulative impact of the foreign policies of the states of  the world.

 Foreign Policy (things you do as a country)

-other say incentives motivate their decisions

What is the meaning of divergent interests?

-Leaders make decisions in the shadow of domestic Policy

*Strategic interaction: strategy used to get what a country wants while  keeping in consideration other countries reactions and how they will  react to another countries actions. (Ex: North Korea growing their army. How will the U.S. react? Will they take it as a threat? Will the U.S. feel  threatened?)

-when making IP leaders have to worry about other country’s reactions  Important differences: can’t think about international relations without  also keeping domestic politics in mind.

Is the state the central action in ir?

If you want to learn more check out What is the meaning of gray matter in the brain?

(Ex: Iraq 2003: Affected by domestic politics and international relations -Osama Bin Laden did not want to admit whether he had nuclear  weapons or not. U.S invaded Iraq because they felt threat. Osama did  not expect the U.S to intervene but rather expected people to fear his We also discuss several other topics like What is “international politics”?

weapons and thus would stay in power. He did not keep both DP and IR in mind.)

*Politics is about: accusation and allocation of scarce resources. -making decisions

Is the State the central action in IR?

What is the state? : Metaphor for a collection of individuals living in a certain  territory

 Some agree that the state is the most important and some argue  there’s more that play a role in international relations Don't forget about the age old question of What is the most objective methods known for acquiring knowledge?

 Importance of other actors such as: Businesses, corporations,  individual billionaires, media, celebrities

-Why war? Expensive and cost lives

-Why trade? Why can’t we make domestic resources?

-Why give up sovereignty?

-Cooperation vs conflict between countries

1.)Coordination: countries/leaders trying to find a way to work with each  other to achieve something in coordination

4.) Sanctioning: process of punishing country’s engaging in things you  don’t want them to do

-success in influencing others depends on ability to use of political,  economic, or military power to persuade other countries to do what  you want

-instrument to achieve a goal

-success on influencing others depends on power

-goals and interactions reflect their preferences

-How other countries are affected by your preferences

-how one sees the world

-misperception about actions of other countries, yourself and your  power, your rival and their intentions

(Ex: Iran creates a larger military, U.S. has a misconception that they  will attack and get scared. Iran uses this misconception to negotiate  and get something they want)

*Misconceptions can help you negotiate

Three pillars as a tool

-autocrats/dictators have to keep elite, military, business to stay in power -affects type of decisions made

Key actors and levels of analysis:

Central authority with the ability to make and enforce laws, rules, and  decisions within a specified territory

-State vs nation (not interchangeable)

-categorization of states (by power status)

-Sub-state actors: exist within a state but have enough power to influence  outcomes

Levels of analysis: The level at which a theory focuses

Individual level of analysis: focus on leaders, personality, history of a person  and how it will affect his decisions

State level: focus on state being the key actor types of government and how  it affects behavior of state, economics systems, national interests,

1.) Greece and the city state (400 BC) made alliances with each other and  fought against each other as well

-secularism and religion a conflict

-troubles in old Europe (new monarchs, taxes, and people don’t like it  and rebel

-tension between secularism and religion

(B)Emergence of the Westphalian System

 leaders interests at the end of war

-Emergence of balance of power systems

-Breakdown of B and P system (WW1)

-after WW2 some countries became rivals

-The long peace between U.S. and Soviet Union

Parts of a theory:

How to evaluate theories?

-Keep in mind not all theories are correct

-They must be evaluated based on rules. Should not use normative or  subjective assessments

Def: human community that claims the monopoly of the legitimate use of  physical force within a given territory (Max Webber 1918/1958)

Def: organization with a comparative advantage in violence, extending over  a geographical area whose boundaries are determined by its power to tax  constituents (Douglas North 1981)

*Concepts to define a state*

-Given territory: state vs nation. A nation is a group of people who share  some sort of common identity.

Why do we need a state?

 The state of nature

-meaning there is no state

-“war of every man against every man”

-“Sovereign (state) entity needed to control the war between  individuals

-under contract: individuals give up civil rights in return for civil rights  that would be protected by the state.

-Individuals give authority to state in exchange of their protection

-a much better equilibrium just off reach

Self-help: described by Kenneth Waltz. Absence of government makes people rely on themselves due to no government protection

Unitary Actor: domestic politics doesn’t matter because all countries will  behave the same way due to incentives

Survival: All states want to survive and will do whatever it takes

Key Actors: They think only state matters despite the acknowledgment of  other powers

 Two criminals caught and separated in different rooms with no means  to communicate with each other. Police have enough information to  convict them both of a lower crime but they need one of them to  confess in order to convict them of a higher crime.

-Suspects have the option to confess of bigger crime or keep quiet and  only be convicted of lower crime.

-Prisoner A and B both keep quiet

-Prisoner B confesses and A is quiet (B sells out A)

-both confess: life in prison

-one confesses while other is quiet: 0 years in prison for one and death penalty for other 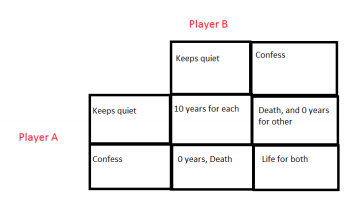 Assumptions: Anarchy, but not seen as a bad thing

 State is not a unitary actor

-Wealth seeking rather than power seeking

 Interests: All want to survive

-Anarchy is what states make of it

 Interests: Everyone has their own interests

 Institutions: Value institutions and play they play an Important role in  influence

What are the intermediate goods?

Why mcdonald’s less control in china?