CU / Geography / GEO 1001 / What are the causes of our experience of seasonality?

● Solar energy: from sun to earth

● Notes that R is the radius of a sphere defined by our distance from the sun.

● Solar energy: from equator to poles If you want to learn more check out Who developed the cognitive theory of depression?

○ Be able to describe the mechanism that causes uneven distribution of solar energy.

■ Tropics receive more concentrated isolation due to earth’s curvature. 2.5 × more than the poles.

Which interaction between earth and the atmosphere scatter energy back to space?

● The seasons: Be able to list 4 reasons why we experience seasonality in solar radiation. ○ Revolution

■ Earth revolves around sun, takes one year, at a speed of

■ Earth rotates on a axis once every 24 hours. Rotational velocity at Don't forget about the age old question of What are the four roles in organizational change?

● Annual march of the seasons

■ Subsolar point at tropic of capricorn

What is the atmospheric function of ionosphere?

If you want to learn more check out How do you calculate the accounting rate of return?

■ Arctic circle has 24 hours of daylight 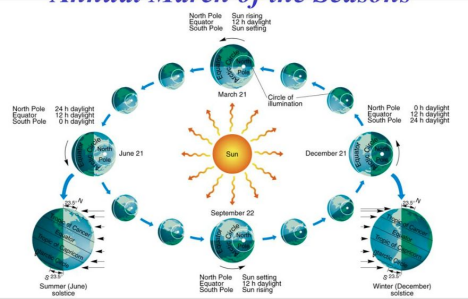 We also discuss several other topics like What gives the stripe appearance of the pyramids?

○ Be able to describe relationship between object temperature and the magnitude and wavelength of emitted energy.

■ Hotter objects emit more energy, they also have a peak emission at

● Atmospheric temperature: We also discuss several other topics like Name the different properties of life.

○ Lapse rate is defined as the rate of decrease with height for an atmospheric variable.( mostly applied to earth's atmospheres, but it can be applied to any gravitationally supported ball of gas.

○ Be able to describe the function of the different layers of the atmosphere with respect to absorption of gamma rays, cosmic rays, x-rays, and ultraviolet rays. ○ Ionosphere

● Three interactions between energy and the atmosphere: reflection, transmission, absorption

○ Reflection: scattering energy back out to space.(light reflects off clouds) ○ Transmission:scattering energy through atmosphere or water without transformation ( no changes in wavelength as energy passses through medium). ■ Refraction: change in speed and direction of light. Don't forget about the age old question of What are the advantages and disadvantages of using electronic medical records?

○ Absorption: assimilation of energy by molecules and conversion to different wavelength. (ex: solar radiation is shortwave radiation absorbed by atmosphere and the atmosphere emits energy as longwave.

● Transmission; be able to mathematically illustrate why the sky is blue from light scattering principles.

● Transmission and refraction: be able to describe why refraction occurs and how it dictates the angle and distance light travels through the atmosphere.

● Be able to describe terms in the surface energy balance

● Be able to calculate outgoing longwave radiation using the stefan-Boltzmann equation ○ Emissivity of a material is the relative ability of its surface to emit heat by radiation.

○ Earth surface emits long wave radiation as a function of the surface temperature and emissivity.

● Be able to describe controls on latent heat fluxes

○ Driven by difference in vapor pressure between surface and atmosphere. ○ Evaporation: energy directed away from the surface.

● Be able to describe controls on sensible heat fluxes

● Be able to describe how available energy (from net radiation) is partitioned into sensible and latent heat fluxes.

○ If surface moisture is limiting then we can not expand energy to evaporate water and LE( latent heat) will be low. As a result we heat the surface and H( sensible heat ) is high.

What is kirchhoff's law of voltage?

What is the study of phrenology?