School: University of Illinois at Chicago

Description: This is a NINE page study guide that covers the information to be included in Exam 2. This is a much more in-depth study guide than the professors and it also includes several photos illustrating some of the cycles and processes we've discussed. 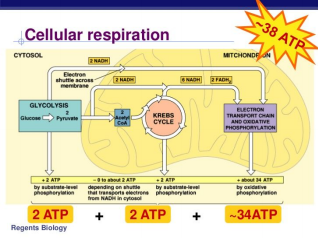 What is Aerobic respiration?

- Pyruvate produced by Glycolysis transported from cytosol> mitochondria, which has inner (filled with sac-like cristae) and outer membrane If you want to learn more check out bms 250

What are the cellular respiration steps?

- Each C in cycle eventually released as CO2 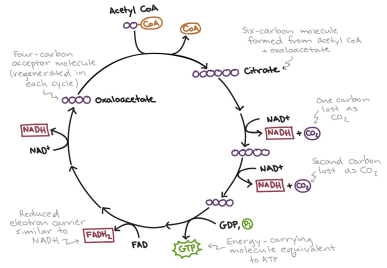 - ETC- molecules responsible for oxidation of NADH and FADH2

- Chemiosmosis= dam and ETC pumps across inner membrane and when protons pass through ATP synthase, it spins and releases energy used to synthesize ATPWe also discuss several other topics like you have decided that you want to attend a costume party as iron man. you estimate that it will cost $40 to assemble your costume. after spending $40 on the costume, you realize that the additional pieces you need will cost you $25 more. the marginal cost

- Emergency-back up to produce ATP

- We use lactic acid fermentation and plants use alcohol fermentation We also discuss several other topics like which of the following bonds are arranged from strongest to weakest in a biological system?

- Facultative anaerobes- can use both types of fermentation

- Photosynthesis- use of sunlight to manufacture carbs

- Chromatography: technique for separating molecules, pigments vary in size/solubility and solvent carries them at different rates

- Electrons promoted to high energy states when photons absorbed by Chlorophyll and if allowed to fall back down to ground state, energy released as heat and fluorescence - 4 possible fates of an electron in chlorophyll excited by photons; energy released: 1. Emitted in form of light- fluorescence

2. Given off as just heat

3. Excite an electron in nearby pigment> resonance

4. Transferred to an electron acceptor in redox reaction

- Photosynthesis more effective when PS I and II work together 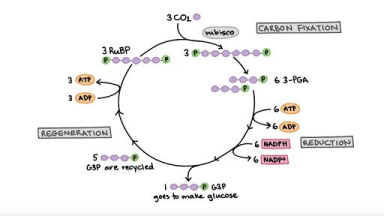 - Calvin cycle manufactures carb and glycolysis breaks it down

- 2 parallel strands of DNA run in opp. Directions: 1 runs 5>3 and other 3>5 (antiparallel) - Complementary/ Watson-Crick base pairing

2. Base-pairing- free nucleotides attach to 3 prime ends according to complementary base pairing

4. Original molecule copied: each copy has 1 new strand and one original - Primary structure of RNA: ribose sugar-phosphate backbone and U instead of base T - Secondary structure: complementary base pairing between antiparallel regions from

- Gene expression- process of converting archived info. Into molecules that actually do things

- null/loss-of-function alleles- don’t function at all

- One-gene, one enzyme hypothesis- each gene contains the info. Necessary to make an enzyme

- Genetic screen- any technique for picking particular types of mutations out of many randomly generated mutants> 1 gene, 1 polypeptide hypothesis today

- mRNA carry info. Out of nucleus from DNA to site of protein synthesis - RNA polymerase- polymerizes ribonucleotides into strands of RNA

- Translation- process of using info. In mRNA to synthesize proteins; done by ribosomes

- Many genes transcribed from DNA but never translated

- Group of 3 bases that specify particular amino acid= codon and diff. Codons in mRNA can code for same amino acid

- Mutations can be beneficial, neutral, and deleterious and can occur anywhere in genome Chapter 17 Transcription, RNA Processing, and Translation

- Transcription in Eukaryotes similar to bacteria, but:

2. Instead of sigma, basal transcription factors assemble at promoter and RNA polymerase follows

3. Transcription and translation separated in time and space

1. snRNPs bind to start of intron and an A base within intron

- After splicing, to become mRNA:

1. + 5 cap- enables ribosomes to bind to mRNA and protects end from attack by enzymes that degrade

2. poly(A) tail- needed for ribosomes to start translation and also to protect ends from attack by enzymes

1. Secondary structure- cloverleaf; some sequences of bases form H-bonds with complementary base sequences; elsewhere in same molecule are stem-and-loop structures

- aminoacyl-tRNA synthetases- enzymes that catalyze + of amino acids to tRNAs - How many tRNA’s are there? Crick proposed wobble hypothesis:

3. E site (exit)- no longer has amino acid attached and is about to leave ribosome - 3-step sequence for ribosome synthesis:

1. Aminoacyl tRNA diffuses into A site; if anticodon=codon in mRNA, stays 2. Peptide bond forms between amino acid held by aminoacyl tRNA in A site and growing polypeptide

3. Ribosome moves down mRNA by 1 codon and all 3 tRNAs move 1 position with in ribosome

- Elongation starts when aminoacyl tRNA binds to codon in A site by complementary base pairing between codon and anticodon; extends polypeptide chain

3. Translocation; repeat at each codon

- Bacteria turn their genes on and off to adapt to changing environment - Gene Expression- multistep process of converting info. that is archived in DNA into molecs. that actually do things in cell

3. Post-translational control- after translation, protein must be activated by chemical modification to function

- some genes transcribed all the time- constituently

1. Generate large # cells with mutations at random locations in genomes 2. Screen treated cells for mutants with defects in process/biochemical pathway in ? - Constitutive mutants- abnormal cells that produce a product at all times - 2 general ways to regulate transcription:

- Transcription can be regulated by 1/both

- How does glucose regulate the lac operon?