UCR / Psychology / PSYC 1 / What is not learned through experience; fast and involuntary responses

What is not learned through experience; fast and involuntary responses

What is not learned through experience; fast and involuntary responses

Description: Chapters 8-9 with overview of Chapter 1-5

What is not learned through experience; fast and involuntary responses?

o Definition of Learning: Relatively permanent change in behavior or capacity for behavior that  occurs DUE TO EXPERIENCE; (EXPERIENCE DEPENDENT CHANGE)

What are inborn patterns of behavior elicited by the environment?

We also discuss several other topics like What is the meaning of the age of license?

▪ Habituation: reduced response to repeated presentation of a stimulus (living by a train  station)

▪ First comes sensitization and then ends with habituation

o A stimulus that naturally and reliably evokes a

response; Stimulus we don’t have to learn from

A stimulus that does not initially elicit the unconditioned response

A stimulus that was once neutral but, through association with the  US, now elicits a response

After conditioning has occurred, the response that is elicited by the  conditioned stimulus

What is the main definition of learning?

We also discuss several other topics like What are the common law felonies?

If you want to learn more check out How does reproductive isolation increase diversity?

If you want to learn more check out Can i sell on record date and still get dividend?

because the food is still present

o Temporal Contiguity: Closeness in time between pairs of events important for learning to occur ▪ Sort of timing is the best for learning in classical conditioning: Delayed Conditioning o What would happen if you rang the bell (the NS) and then waited 15 min before presenting  the food (the US)? If you want to learn more check out What shifts the aggregate demand curve?

▪ No association between the neutral stimulus and the unconditioned stimulus would be  made therefore not making the conditioned response.

• Aversion Therapy: Exposed to a stimulus that would cause some discomfort (Ex. Conditioning a taste  aversion to alcohol; pair alcohol with drug that produces nausea; Quit smoking--some stuff you can  add that can produce nausea or make it taste bad; ex. 2 packs of cigarettes in the bathroom— nauseating)

• Stimulus generalization: Generalizing the response by one stimulus to another; (Ex. Experience with  cigarettes might have same reaction to cigars) We also discuss several other topics like What are the 3 elements of negligence?

• Law of Effect – consequences influence our behavior; Thorndike’s idea was that the consequences of a  behavior determine whether the behavior I likely to be repeated

o Operant adds the behavior part to the conditioning; operant reinforces the behavior o Pavlov’s: led to animal learning an ASOCIATION between 2 stimuli (food and bell); response  was secondary (bc it occurred with both)

o Thorndike’s: led animal to learn which behaviors would lead to reward, and thus the learning  directly affected animal’s response

▪ Teaches you what NOT to do, but does not teach what SHOULD been done--More  effective to be positively reinforced for good behavior or behavior that is wanted ▪ May not work because they see it as a form of attention (children)

▪ Punishment can turn into negative reinforcement

• Ex: Prof. Huffman’s kid missing recess bc he liked Ms. Jackson AND way to relieve  from stress of being picked by other kids

▪ Punishment is SIGNALED—punisher becomes signal for punishment, so person receiving  punishment avoids behavior only when punisher is present

▪ MUST have consistency—every single time that there is behavior, always deliver the  punishment

• Token economy: Offer effective rewards like no-value tokens that can be exchanged for something  valuable 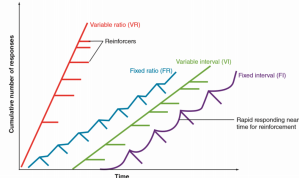 • Extinction: When a response that was previously reinforced is no longer reinforced, resulting in a  weakened behavior

o Intermittent reinforcement – increases the resistance to the effects of extinction

o Encoding: Converting information into a form usable in memory

o Retrieval: Active Process of locating and using stored information; recovery of stored  information when it is needed

o Long Term Memory: Memory in which information is represented on a permanent or near  permanent basis; Permanent/semi-permanent memory

o Consolidation: Process by which information in short-term memory is transferred to long term  memory

o Explicit (Declarative) Memory: memories described verbally, and of which we are consciously  aware (Facts/Knowledge)

▪ Episodic: Record of our life experiences; tied to specific contexts

▪ Semantic: Conceptual information; contains data, facts and other information to include  vocabulary

o Implicit (Nondeclarative) Memory: memories that cannot be described verbally; and which are  not available to consciousness

▪ Classical Conditioning: Memory for associations learned through Pavlovian Conditioning ▪ Priming: change in our response to a stimulus due to pre-exposure to related stimuli,  explains many everyday effects of familiarity

o Parts of the Brain Involved in Memory:

o Recall: Bringing up memory of information from your stores without having the options  available (essay tests)

o Recognition: recognizing the correct answer from a series of options (Multiple Choice Tests) o Flashbulb memories: Some memories seem permanently etched into brains and seem extra  vivid because hippocampus and amygdala is even more active than usual (from cortisol release) ▪ Produce memory that has both declarative and emotional detail

▪ Ex: Getting an iPhone, learning how to use it, forgetting how to access something on old  android

• Psychology: Scientific study of the causes of behavior; “science of mind and behavior” • and note the goals and areas of the field.

▪ Our consciousness can be broken down into its essential elements or ‘structures’ ▪ Introspection: Personal observation of our own thoughts, feelings and behaviors;  looking inwards, or self-examination.

• “Ignore what this object is, instead describe your conscious experience of it”

▪ Our consciousness serves as an adaptive purpose by helping us survive.

▪ Started to describe consciousness, awareness of our choices, thoughts and emotions ▪ Viewed behavior as purposeful, since it led to survival

o Determinism: Concept that behavior is result of prior events… led to the doctrine that  education and life experiences are key to psychology

▪ Learning and experiences are key factors in development of a person

▪ Experiences we have determine who we turn out to be

▪ More connected with the concept of ‘nurture’ rather than ‘nature’

▪ Our behavior is learned, observable & measureable

▪ We have free will to live more creative, meaningful and satisfying lives

▪ Expanded idea that people are innately good, motivated to improve themselves and  only behave badly when corrupted by society

• 5 Steps of an Experiment

2. Designing an Experiment—include independent variable or the variable controlled and  manipulated by the experimenter (“If I do this…”)

o Evolution= The expansion of the idea of essentialism and taxonomy: the view that all living  things belong to a fixed close or ‘kind’ and that they were related in some way.

o Central Nervous System: Brain and Spinal cord; **Retina is also considered a part of the CNS— has neurons connecting directly to the brain

• Major Systems and Parts of the brain

o Meninges: Layers that are filled with fluid to help provide protection for the brain and spinal  cord tissues

▪ Pia Mater: Layer that sticks on the surface of the brain

▪ Cerebrospinal Fluid: in between the layers serving as a liquid shock absorber ▪ Dura Mater: Thick layer/skin on top of fluid; translates to Tough Mother –EXTRA CREDIT o Hindbrain (and its parts)

▪ Cerebellum: (Connected to the brain by pons) 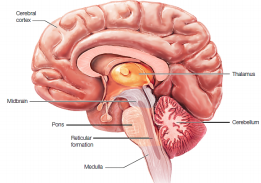 ▪ Amygdala: Role in identifying, remembering and responding to fear and aggression;  emotionality

• Reduced size from exposure to alcohol as a fetus

o 4 Lobes of the Neocortex 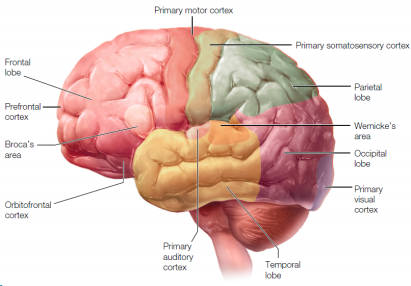 ▪ Frontal Lobe—Located in front of the brain (forehead area)

• Posterior areas do some complex processing of vision

▪ Temporal Lobe—located at the temples

• Has areas specialized for particular functions, like higher visual system tasks  including the recognition of objects and the faces of familiar people

▪ Occipital Lobe—Located at back of the brain

• Connected to temporal lobe to allow recognition of objects we see

▪ At rest: Negative membrane potential/charge—more negative inside than outside (-70  millivolts); channels closed 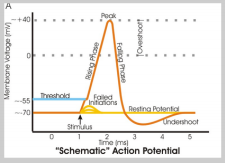 • Free nerve endings. One of their major functions is to transmit information

about temperature and pain.

• These receptors send their electrical signals to neurons within the spinal cord,  which brings the information to the brain

▪ Resting on top of the basilar membrane is the organ of Corti, which contains many rows  of hair cells that transduce sound energy into neural signals.

▪ Taste receptors are on taste buds located in the bumps, or papillae, located on the  tongue.

o Rods – for viewing dim light with no color; sensitive to low light and motion; important for  danger in peripheral (high concentration in peripheral)

o Cones – for bright light with color; give fine detail/focus, concentration in fovea—not many in  peripheral

o Top down processing: context and preexisting knowledge are used to rapidly organize features  into a meaningful whole; way you interpret it depends on context

▪ Know what numbers and letters are needed to make a complete sequence (B in the top  row, 13 in the bottom).

o Bottom up processing: start constructing at the “bottom” with raw materials— begin with  small sensory units (features) and build upward to a complete perception

▪ If B/13 stimulus seen by itself, probably recognize that it’s ambiguous and could be  interpreted multiple ways.

o Gestalt in terms of perception: We are born with many built-in tendencies to organize  incoming sensory information in certain ways

▪ Figure-ground: we identify the main object in the scene (the figure), which stands out  from the background; visually pull the figure part of the stimulus forward while visually  pushing backward the background

▪ Continuity: assume that points that form smooth lines when connected probably belong  together

▪ Closure: “fill in the blanks” to see a single object; tendency to complete a figure

o Depth Perception: requires that we perceive the distance between us and objects in the  environment as well their distance from one another.

o Linear Perspective: when parallel lines seem to converge in the distance

o Interposition (overlapping): overlapping object appears closer, and the object that is  covered appears farther away

o Texture Gradient: Areas with sharp, detailed texture are interpreted as being closer, while  those with less sharpness and poorer detail are perceived as more distant 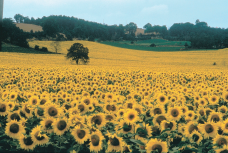 o Convergence: degree to which the eyes turn in to focus on a close object

▪ Based on signals sent from muscles that turn the eyes

▪ To focus on objects that are near or approaching, these muscles turn the eyes  inward, toward the nose

• Perceptual constancies: Tendency to perceive objects as the same even when their physical  characteristics change

o Size Constancy: tendency to perceive objects as remaining the same size even when their  images on the retina continually grow or shrink

o Shape Constancy: tendency to perceive an object as retaining its same shape even though  when you view it from different angles, its shape is continually changing its image on your  retina

o Brightness Constancy: refers to the tendency to perceive brightness as remaining the same  in changing illumination

o Color Constancy: refers to the tendency to perceive colors as remaining stable despite  differences in lighting 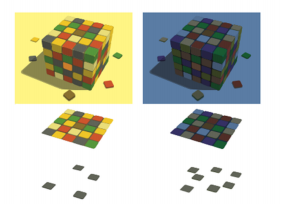 What do liverworts hornworts and mosses have in common?

What is an inertial reference frame is one in which an observer?