What are the signals?

And how will the signal terminate?

So how is a signal going to respond to however they’re supposed to respond?

Signal Transduction: Just as much as we need cell phones, cells need their signal transduction. Between tissues, cells, external environment, like how light is a signal , that is based on a signal on G protein coupled reaction. Our signals don’t necessarily have to be hormones, could be a number of other  things. Signals are majoDon't forget about the age old question of sol y viento episode 3
Don't forget about the age old question of mu 672m textbook notes
We also discuss several other topics like span 3371 class notes
If you want to learn more check out r___iiia___x
If you want to learn more check out leigh smith uva
If you want to learn more check out moral involves having the willpower, desire, and integrity to stand up to pressure, overcome distractions and disappointments, and behave morally.
r way of communicating within the body First, the signal is Received by receptors. Then the signal is amplified. This is why little bit of hormones goes such a long  way. You can have about  Nano molar concentration of hormones and it will still go a long way. That is not only due to the strong strong affinity of receptors to the hormones but also due to the  amplication. The players responsible for providing for signal amplification: - G protein - Signaling cascades - Activation of Kinases and Phosphatases To amplify a signal, focus of a signal is to trigger a cellular response. So how is a signal going to respond to however they’re supposed to respond? And how will the signal terminate? - Often times, signal not terminating can be problematic like in cancer cells,  when the signal don’t terminate. - Cell proliferation?  - Often times, could be a cause of a disease. Two Outcomes of Signal Transduction Pathways - In this course, we might focus on change of enzyme activity or change in  group of enzymes - Signal transduction also can change gene expression. o That happens quite a lot o Signal transduction cascades can also change gene expressions o The result of these signaling cascades are either individual or  combinations. What are the signals? - Neurotransmitters o External signals - Hormones and growth factors - Smell, taste, vision o Based on signaling cascades most of which involve a G protein  doubled receptor- Extracellular matrix o Very important  - Surface to which cells are attached. They are not free floating, they’re either  attached to one another or attached to extra cellular matrix. EC matrix  provide important signals to the cell and the environment. - The attachment maintains a differentiated state. - Cellular differentiation o What makes a cell specialized. Like what makes a muscle cell, muscle  cell and what makes a liver cell, a liver cell. o A lot of that not only has to do with gene expression , but also with  ability of cell to interact with the extracellular matrix. o In cancer, you lose some of the differentiated characteristic and cells  become much more aggressive.  o So, the EC matrix is also another helpful signal, that cells are  dependent on. The interactions between cell related protein and the EC matrix 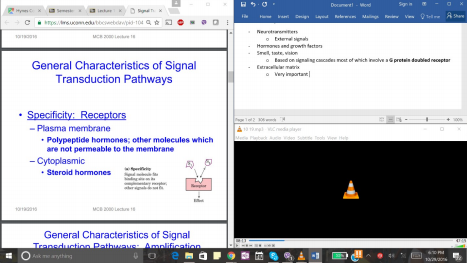 General Characteristics *Specificity: - Receptors located in two places plasma membrane of cytoplasm. o The reason we DON’T HAVE steroid hormone in plasma  membrane is because:  We don’t need to.  Steroid hormone is  hydrophobic.  relatively small in  comparison to  protein hormones such as insulin, glucagon, etc o Therefore, Steroid hormone can pass through the membrane based on  chemical characteristic and the size. o Steroid hormones are INSIDE the cells. o Receptors at the membrane are large, polar, charged - Major difference with interaction with the receptor interaction with its ligands  is it’s- relative affinities  o Enzymes can stand the range that’s why they have different Km .  Whether it’s an allosteric enzyme with K0 or 5, or you’re talking about  Michaelis Menten equation. The difference in enzyme structure  changes in Km values. o With receptors, they bind with VERY HIGH affinity, the majority of it.   They might have low affinity sites but if you want to have the  reaction initiated from that particular receptor to be productive,  you HAVE to have high affinity and specific. High affinity sites  matter the most. *Amplification:Signal reacts with Enzyme one; Enzyme 1 triggers Enzyme 2 has 3 folds; then  enzyme 2 activates more enzyme 3;  Each of these steps are point of amplification and point of regulation For Example: Epinephrine (muscle) or Glucagon (liver): 1. They interact with their receptor—G-protein. a. Receptor typically has no activity other than to bind the hormone.  b. The reason it’s called G-couple protein is coz it’s going to involve G protein. i. It is G-protein that has activity. 1. 3 subunits ii. When hormone binds, G-protein becomes activated 2. One of the subunits split from the other two and go to activate another enzyme- Adenylate cyclase in this case.  3. That enzyme produces 2nd messenger – Cyclic AMP (derived from ATP and its substrate) 4. Cyclic AMP activates Protein Kinase which stimulates another Kinase 5. That another Protein Kinase stimulates enzyme that’s involved in breaking of  Glycogen. *Desensitization/Adaptation If a system becomes refractory, can no longer respond for a brief period of time.  In conductance of neural impulse, sodium rushes in, trigger the action potential,  eventually export Na back out of the cell… You max out on how well you’ll be able to stimulate the cell and still get a response. Therefore, it’s a way to give cells a recovery period so that when another stimulus  comes, you can still be able to give a strong response.; in a sense also runs from the feedback. *Integration   Hormones integrate with another hormone to turn on/ off a cascade. We’ll focus on 2 types of signaling cascades: 1. G-Protein coupled receptors - Highlighted in Red - A.k.a Serpentine Receptor coz it has 7 α-helices that are integral member proteins that snake in and out of a membrane 2. Receptor Tyrosine KinasesThese are not the only two signalling cascades. We also have Steroid receptor,  that translocates to nucleus to change the instruction on binding the steroid  hormone. Structure of G-Protein Coupled Receptor (GPCR) Won Nobel Prize for knowing the structure of G protein and how G protein reacts to receptor. Receptor is an integral membrane protein. Integral protein need the lipid environment for the right structure.  The functions affected by G-protein coupled signalling cascades are given in the table. The blue belongs to the receptor itself.The ligand binding here is in yellow. The bottom in red, green and yellow is the G protein.  It is interacting with receptor by non-covalent interaction, that on binding the ligand (could be hormones, extracellular signals, etc) is going to trigger specific  interaction. More about G-Proteins - Quaternary structure i.e. 3 subunits (α,β,γ) - The α subunit has enzymatic activation o Able to hydrolyze GTP; it’s a GTPase o In start, GDP is bound and when GDP is bound, G-protein is inactive. o After receptor binds, GDP comes off and GTP comes on o When α subunit binds GTP, it becomes active and dissociate from β  and γ. o When α subunit HYDROLYZE GTP and splits it to GDP and inorganic P, it returns to inactive state. What triggers it’s enzymatic activity? How does G-Protein stay active for  certain period of time? How does it know when to terminate? What  happens if it terminates the signal too soon? - Membrane mediated events- Adrenaline binds to receptor, GDP 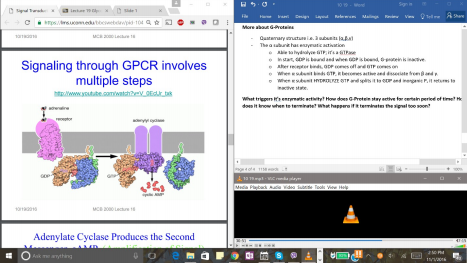