Patterns of distribution suggest species niches. how do we test whethe

Patterns of distribution suggest species niches. how do we test whethe

Patterns of distribution suggest species niches. so how do we test whether species are really limited to particular conditions?

Patterns of distribution suggest species niches. So how do we test whether species  are really limited to particular conditions?

Are these two species limited by competition or can they only survive at specific  elevations?

Are these two species limited by competition or can they only survive at specific elevations?

-Scarlet was placed in high elevation

-Lewis was placed in low elevation.

-Understand the spread of invasive

-Understand that it may be a rare species with already low numbers -Understand how climate change will affect these niches.

1. Map locations where individuals have been found (usually use GIS) -Gather data from…

What are the characteristics of population distribution?

Don't forget about the age old question of What is article 19 of the universal declaration of human rights?

-what variables are important?  We also discuss several other topics like Where is australia located?

3. Map the locations where these conditions occur.

Not great for territorial animals

I-Click question We also discuss several other topics like What is the meaning of codependence?

You collect 100 arthropods. You mark them all. 2 weeks later you capture 200 and  20 were marked. What is the total population?

-doesn’t adapt well to edges due to gene flow

-they are best adapted in the middle We also discuss several other topics like What is the symbol for angular velocity (radians/sec)?
If you want to learn more check out What is the cycle of managers?

-more genes in middle that aren’t adapted to edges

I-Click: What would be better adapted to local conditions?

-Evenly spaced/ over dispersed Don't forget about the age old question of What is the meaning of static in biometrics?

Habitat may be patchy at multiple scales

-Patches may vary in quality at small scales

Population densities should be different in patches of different quality

-Lots of elaborations on the metapopulation model

-look at one species at a time

-Assume no differences in patch quality or subpopulation size

e=rate of extinction of occupied patches

Slope tells how quickly p changes in respect to t

-if the slope is zero, then dp/dt is zero

If colonies are added or

If you let colonization and extinction happen, you  can reach equilibrium

How does Levin’s model predict that you could increase patch occupancy rates? -Justifies use of corridors

-if you increase c, you make it easier for colonization  allowing movement  increases colonization

Patchy occupancy is sensitive to quality

Sinks: move in but don’t send colonists out

-Some patches are important to population persistence

-Variation may be important

-suboptimal patches may act as reserves

Landscape model: effects of patch arrangement and surrounding landscapes -isolated and small patches are likely to be unoccupied

-connected and large patches are likely to be occupied

-connectivity important but also increases the spread of predators and  pathogens

Every patch has a risk of extinction

-may need to reintroduce species into several habitats

Is the population stable, increasing, or decreasing?

How do abiotic and or biotic factors affect population growth?

Predict N in the future

If per capita birth and death rates are constant, if population growth is  proportional to population size.

If N is constant every year, you can estimate population size.

If Lambda = 1, the population size does not change

If lambda is >1, the population increases

If lambda is <1 then population decreases

dN= change in numbe3r of individuals

dt= per change in time

N= number of individuals in a population

Lambda will never be negative

If a population of 1000 mice has an intrinsic rate of increase of .5, how many mice  will be in the population after 6 months?

So using a log graph is easier to compare populations

The graphs below are the same graphs (conceptually). The first is an exponential  graph, and the second is a log graph.

The growth of some populations is determined by density-independent  factors

Population growth can be limited due to population density

There was data collected on its historic and current colony size

Not everything has a negative effect

- Reintroducing a fish species into Lake Eerie  (or any large lake)

Fisheries when a population crashes, it can’t recover because they need  density to grow.

As population growth gets slower, N gets larger

If N>K, it is a negative slope

If the population is small, it is influenced by rN

If the population is large, it is influenced by (K-N)/(K)

All these models have assumed demographic equivalence. In real life, populations  differ in age structure and have different demographic rates

In the U.S, the age is fairly even from 0-50. This means that the population size is  stable and won’t change a lot

In Germany, there are more post-reproductive people than pre-reproductive. This  means that there will be fewer people in the future and the population is on the  decline.

In India, there are more pre-reproductive people than post-reproductive, which  means that the population is increasing.

Normal age distribution for a species is affected by survivorship patterns

Type I: survival rate high at a young age and most mortality occurring at an old age  (humans)

A Juniper in Spain is in trouble because it produces very few seedlings and  juveniles.

sx= survival rate from one age class to next age class

bx= number of offspring produced by each individual

Number of surviving to the next age class= (nx)(sx)

The arrows represent the probability of going onto the next stage or  staying at current stage.

Express membership in size class at (t+1) with equation

Calculate the size of each class for 2 time steps. Start with 100 individuals in every  class

There si a probability rate for every arrow

Put probabilities and starting class sizes into your equations

Calculate nt+1 for every stage class

Total population is sum of all stage class

Projecting a population over time

Ration of classes stays the same

Shows which class will be more at the end

Settle at a constant growth rate

To calculate SSD wait until population growth rate stabilizes then calculate the size  of each class a percentage of total population size.

The population will not grow after a few time steps (lambda=1) How could we increase per capita growth if we want populations to persist? need to change arrows to change lambda

How do you know which arrow to change? Through a perturbation analysis Perturbation Analysis

Reveals how changes in demographic rates would or could affect lambda

Can be calculated for every demographic rate, which causes the biggest change Example

If P32 is big, then changing it will affect the growth rate a lot because P32  would be sensitive

Sensitivity is useful in conservation when determining the budget and where to  allocate resources.

Some vital rates are in different units

Changing fecundity by 0.1 is often different than changing survivorship by 0.1 Might want to know the relative effect of a certain proportional change (change in lambda/ lambda)/(change in P/P)

Proportional rather than absolute change

In cheetahs, which life stage is most important to population growth? Hollow= sensitivity Blue= Elasticity

Because the elasticity is higher in adults, you would want to increase adult  survivorship to affect population survivorship

change in lambda/change in Pji

Use stage-based models to predict risk of extinction

Run several times (sometimes up to 1,000 times) to see how long it took for a species to go extinct gives an idea how vulnerable populations are

Guanaco were reintroduced to Argentina

Ecologists created different models with different conditions to compare what management practices would decrease the probability of extinction in 100 years.

How populations respond to environmental conditions

Some populations are intrinsically stable, unstable, or fluctuate a lot

Stability is affected by…

Whether it’s a K or r selected species

Very stochastic, they are not constant or stable

Plankton are really small which plays a part in their instability

Environmental changes tend to be

Populations may track environment challenges. However most population  dynamics are periodic.

Steady, so no oscillations

Some of these patterns can be predictable

Why do oscillations occur in population dynamics?

1. There is a delay in their density dependent responses

A metaphor to explain this is a new golfer. The hole is the carrying capacity, and the new golfer hits the ball so hard it goes past the hole. (The population has now  exceeded their carrying capacity and are at their peak) To compensate going past  the hole, the new golfer hits the ball back to the whole with the same amount of  force. Once again, it goes past the hole (This is when the population crashes)

Discrete generations, such as ones that have annual reproduction Slow responses to feedback mechanisms

Ex A species of Daphnia stores energy in times of abundance, so they  exceed their carrying capacity when resources are low

Ex pulse of resources leads to higher quality offspring being produces, so the effects of the resource pulse are not apparent until next generation 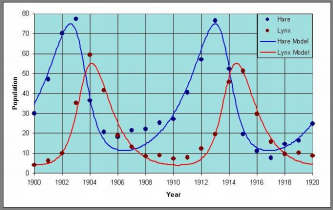 overshoot K a little but eventually level off

-Similar to the metaphor of the beginner golfer, but instead think of an  intermediate golfer.

If r x tal is small, then there is no oscillation

If r x tal is intermediate, then there is damped oscillation

If r x tal is large, then there is a cycle and chaos

Can you predict risk of outbreaks?

Populations of parasites and pests may cycle, so it would be useful to predict  and prevent cycles

r selected species, so it has a large boom and bust cycle

If we were to disrupt the cycle, it could cause the cycle to level out

If individuals were added at the peak of a cycle, it caused the cycle to  level out

What is the definition of a questionnaire?