Artifact Analysis and Interpretations: After the  Excavation

∙ Washing- get them clean so it can be analyzed

∙ Conservation- process of treating artifacts so they decay slower ∙ Reconstruction- refitting, mending, putting pieces back together ∙ Cataloging- writing a number on the artifact in ink

The Hunley: a confederate submarine that sank, the remains found were reburied Analysis of artifacts

Typology: classification of artifacts into types a. Separating into types on the field – general or gross categories If you want to learn more check out When did agriculture start?

b. Separating into types in the lab – finer or more specific categories

∙ Similar overall, not necessarily similar in function or chronological period  however

2. Temporal type: time markers Don't forget about the age old question of What are the four island types?

∙ Ex. Paleoindian points such as Clovis, Suwannee, and Simpson

3. Functional types: what their purpose is

a. All are used for same thing, doesn’t matter what they look like or when  they were made

b. Ex. There are many ways a fishing rod/hook can look in diff cultures but  they are all same functional type

What is middle range research?

Middle Range Research: infer behaviors, explains why there’s a necessary  relationship between the artifact’s attributes and makes an inference about it

c. Principle of uniformitarianism says relationships in present true of the past  because they are inherent to the objects/actions being observed

Taphonomy: Study of how artifacts and features become a part of  archaeological record We also discuss several other topics like What is the social exchange model?

∙ Look for patterns in data

∙ Human behavior was inferred from patterns in remains.

Page/Ladson site in Aucilla River, FL We also discuss several other topics like What is the function of the vestibulospinal tract?

a. Mastodon tusk found underwater, they found lines and cuts on them that  looked like stone tools so they knew humans were involved. HOWEVER,  can’t just to conclusion that they hunted them.

∙ How artifacts were used 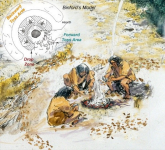 ∙ Identify it, type of animal, age, sex, what bone it is, what side is it ∙ NISP=number of individual specimens

∙ Any modifications to it? Taphonomic (weathered) or cultural (done by humans)?

∙ Species diversity (how many found at site) and Species Equitability Paleoethnobotany: analysis and interpretation of plant remains

a. Sediments, cooking residues, tooth calculus, working edges of tools Other types of evidence for plant use

∙ Analyze remains to understand health, life, death, of people in the past ∙ Skeletal remains analyzed in complete or near-complete bone fragments

o Charnel house: structure that eastern Native Americans used to lay out  the dead where the body would decompose, the bones would be

buried/cremated after, lead to bundle burial

o Bundle burial: flexed burial, one is put in fetal position and wrapped in  fabrics

Osteoarthritis: loss of cartilage between joints from overuse, leads to eburnation (very smooth parts as a result of bones rubbing together)

a. Life expectancy at birth

b. Age profile of population

c. Patterns in ages of death

Diets can be reconstructed from skeletal remains Caries: cavities, form when food stays on your teeth. Bacteria forms on it and it  dissolves tooth enamel and can make holes in your mouth. Can lead to death.

What is the tokugawa shogunate?

What happened in bacon's rebellion?