Latitude- Effects insolation. Isolation decreases as one moves away from the subsolar point- a point that migrates between the Tropic of Cancer and Capricorn. In addition daylength and sun angle change throughout the year, increasing seasonal effects with increasing latitude.

Altitude- High altitude has greater daily range, and has lower annual average. As the atmosphere thins( high altitudes) there is a loss in its ability to absorb and radiate sensible heat.

What is the meaning of hadley cells?

Evaporation- evaporation consumes more of the energy arriving at the ocean's surface than is expanded over a comparable area of land because water is available. An estimated 84% of earth's evaporation is from the oceans. If you want to learn more check out What are the written promises to pay a sum of money on a specified future date called?

Transparency- Water is transparent meaning that light travels through it which leads to the distribution of available heat energy over a much greater depth and volume, forming a large energy reservoir. Compared to land which is opaque and light does not penetrate, but absorbs, this heats the grow during exposure but is rapidly lost at night or in the shadows. If you want to learn more check out What is the difference between vowels and consonants?

Specific heat-is the measure of the heat energy required to increase the temperature of a unit quantity of a substance by a unit of temperature. Is greater for water than for land

What are the ocean currents and sea-surface temperatures?

Movement- Water’s movement allows the mixing and distribution of available heat energy. Land and the ocean radiate longwave radiation at night, but land loses it more rapidly because it is not moving. We also discuss several other topics like A data point on a graph or in a set of results whose value is much larger or smaller than the next nearest data point is known as what?

Ocean currents and sea-surface temperatures- The gulf stream moves warmer water towards the southern third of Iceland which makes the temperatures much milder then what would be expected for a latitude of 65 degrees North.

Isotherms- Isotherm is an isoline – a line along which there is a constant value. In this case it portrays a line that connects points of equal temperature creating a contour map pattern of temperature. Thermal equator is an isotherm connecting points of highest mean temperature

January Temperature Map: Thermal equator(an isotherm connecting all points of the highest mean temperature) movement southward, more pronounced over large continents. Southern hemisphere has little seasonal variation in mean temperatures due to the lack of large landmases and the vast expansing of water.

Coriolis- A deflective force, makes wind that is traveling in a straight path appear to be deflected in relation to earth's rotating surface. Deflects wind to the right in the Northern Hemisphere and left in the southern hemisphere. Without it, winds would move along straight paths between high and low pressure areas. Only affects objects already moving Don't forget about the age old question of What is the function of the socratic method?

Friction- Drags on wind as it moves across surfaces: it decreases with height above the surface.Without friction, winds would simply move in paths parallel to isobars and at high speeds. Only affects objects already moving

-Gravity is a vertical wind

•Be able to describe and draw patterns of air movement associated with low pressure cells and high pressure cells in the: We also discuss several other topics like What is leadership based on the ability to lead across a range of different cultures?

Northern hemisphere- –Relative to north pole, earth spins in counter-clockwise rotation. –Deflection of air movement is to the right due to Coriolis 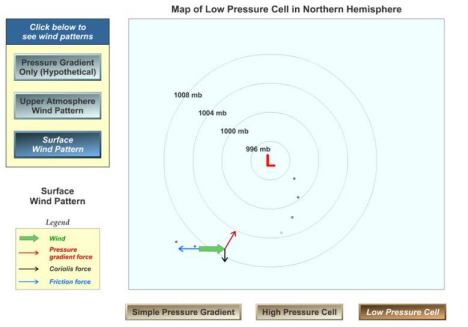 Describe and how they vary with seasons over land versus water.

Thermal Equator- The thermal equator is a belt encircling the Earth, defined by the set of locations having the highest temperature. Primarily dictated by solar radiation, also sensitive to land-water heating differences, mountain ranges and ocean currents,

Intertropical Convergence Zone-Area along the equatorial region where solar radiation drives surface heating, causing air to rise and resulting in significant precipitation.The rising air is replaced by horizontal air movement from both the northern and southern hemisphere creating “convergence” along the ITCZ. Summer is a wet season.The location of the intertropical convergence zone varies over time. Over land, it moves back and forth across the equator. Over the ocean it also oscillates, but more subtly, as ocean temperatures modulate the movement.

–describe and identify locations and their relationship to trade winds, westerlies, and easterlies:

Hadley cells: As rising air along the ITCZ rises it cools and precipitation occurs. Once cooling is significant enough the air begins to descend at higher latitudes (about 30 degrees) in both the northern and southern hemisphere.This air circulates back toward the equator, creating a “cellular” pattern of rotation. This is why they are associated with the trade winds because they start at the ITCZ and then return to it as the trade winds.

Ferrel Cells: Air descends along an area near 30 degrees latitude.Descending air flows to higher and lower latitude as it compresses at the surface.Air flow moving to higher latitude is deflected to the right in the northern hemisphere and to the south in the southern hemisphere, creating the westerlies. 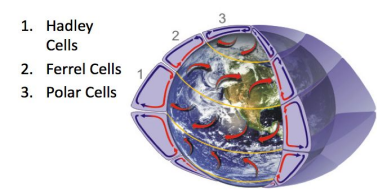 –Be able to identify locations of

Be able to draw the saturation vapor pressure curve and determine dew point temperature for a given air temperature and relative humidity.

Dew point- The temperature at which a given mass of air becomes saturated and net condensation begins to form water droplets. The air is saturated when the dew point temperature and the air temperature are the same TD = T − ((100 − RH)/5) 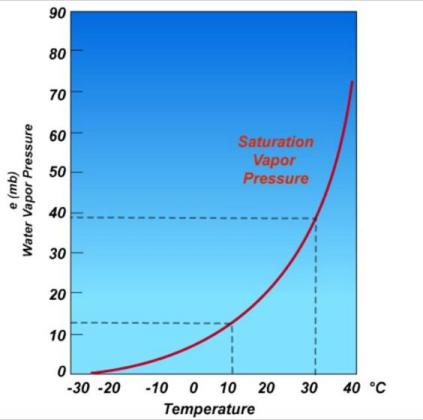 Be able to define the rate at which air cools as it rises for both moist and dry air and how it relates to atmospheric stability.

- Air parcel cools internal as it expands under low air pressure. Air parcel heats internal as it is compressed by higher air pressure. The dry adiabatic rate is the rate at which “dry” air cools by expansion (if ascending) or heats by compression (if descending). The moist adiabatic rate is the rate at which an ascending air parcel that is moist or saturated, cools by expansion. It is unstable because air is rising higher into the atmosphere.

Be able to list and describe mechanisms for air lifting and it’s importance with respect to precipitation. 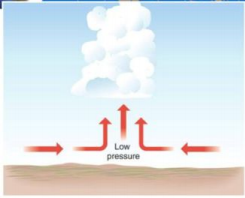 Convectional Lifting- when air passes from a maritime source region to a warmer continental region, heating from the warmer land cause lifting and convection in the air mass. Warmer surfaces produce conventional lifting. 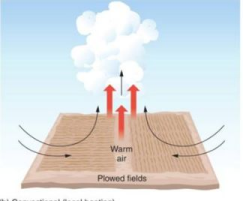 Orographic Lifting- Occurs when air is forcibly lifted upslope as it is pushed against a mountain.The physical presence of a mountain acts as topographic barrier to migrating air masses. 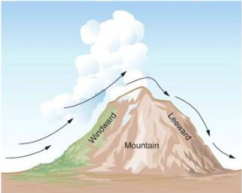 Frontal Lifting (Cold and Warm Fronts)- The leading edge of an advancing air mass. A front is a place of atmospheric discontinuity, a narrow zone, forming a line of conflict between two air masses of different, pressure, humidity, speed and cloud development. 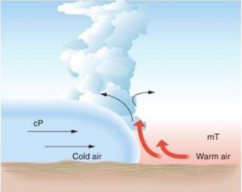 Evaporation- Process by which a liquid becomes a gas

Transpiration-loss of water from a plant through its leaves

Infiltration-seepage of water into soil or rock

Aquifer-a rock layer that stores and allows the flow of groundwater Evapotranspiration-evaporation from plants, and soil

Permeability-a rock's ability to let water through it

Impermeable-a rock that tends to stop the flow of water

Sublimation- direct change from ice to water vapor, or water vapor to ice.

Humidity-the amount of moisture in the air

Snow-precipitation falling from clouds in the form of ice crystals

freezing rain-rain that freezes when it hits a cold surface

Virga-Precipitation that begins falling to the Earth but evaporates before reaching the surface.

cloud seeding-encouraging rainfall by seeding the air with condensation nuclei

Be able to calculate a soil water budget. 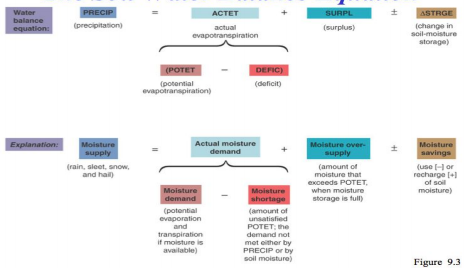 wilting point-Wilting point (WP) is defined as the minimal point of soil moisture the plant requires not to wilt. Happens when soil starts to become hygroscopic.

field capacity-Field Capacity is the amount of soil moisture or water content held in the soil after excess water has drained away and the rate of downward movement has decreased.

What are the three ways that we can potentially make use of geothermal energy?

What is the main definition of operant conditioning?