Description: This is a study guide for exam two on Thurs. 3/30.

-Raphael: he had a different personality than Leonardo &

Michelangelo. However, you see Leonardo’s influence on Raphael—this  can be seen with how the figures are in 3 (pyramidal), which is similar  to Leonardo’s Virgin of the Rocks (1483-1490). Also, there is a hint of  sfumato*

-Marriage of the Virgin (1504): oil on wood; painted for the chapel of  Saint Joseph in Florence.

Don't forget about the age old question of How did adams win the election of 1824?

composed in 3 in subtle chiaroscuro**

Where is fresco located?

fresco; it is located in the Stanza della Signature

philosophers such as Plato & Aristotle. There is a

self-portrait of Raphael on the right. Michelangelo

(or Heraclitus… it is vague as who the man is) is

shown in the middle left in a melancholy***

manner. Overall, it shows how the High

Renaissance was about increasing monuentary figures.

**chiaroscuro: bright & dark If you want to learn more check out What is the hieroglyphic symbol for pharaoh?

***In the Renaissance, melancholy was associated with genius.

-from “maniera” (manner) & “grazia” (grace)… and now to the modern term Mannerism.  -An extension of the period of the High Renaissance in mid-16th century Italy.

-represents a weird rejection of many things from the High Renaissance as well as an intensification of things that were already present. However, it is NOT anti-Renaissance

-the meaning of many Mannerist artworks were ambiguous If you want to learn more check out How do you calculate consumption spending?

commissioned by the head of the Medici family & given to the

King. The meaning of the painting is ambiguous.

church in Florence. It depicts disciples around the body of Christ

after he is taken down from the cross, and the Virgin Mary in

blue. Note that here, it is a religious subject, but it is in the

same style as other Mannerist paintings.

If you want to learn more check out What are the characteristics of possessive?

Another religious subject. Note the mannerist tendency to

idealize (the hyper-elegance… ex: texture of the shirt).

-Key History of Artwork at this time:

-Disegno means design of a painting (ex: posing; arrangement of figures). Mostly the  foundation of art for central Italians (in Florence) and Norther Europeans.

oil on wood transferred to canvas.

It is a Sacra Conversazione = Sacred Conversion of grouping; an

altarpiece style of figures in a semicircle conversing

mother is. This painting is a great example of how in the 16th

century: multiple paintings were being displayed together so

paintings seen as paintings. Thus it suggest the landscape is

the subject of the painting and the figures are just there.

-Titan: Venetian artist who was flexible (ex: artwork was mythological, religious, etc.). He  also combined Venetian motifs with central Italian action-packed figures. His painting had  THICK pigment and was known for conveying light through color.

2 females, & an individual with a bagpipe in the background.

Males: 1 is elegant & 1 is peasant-like (a familiar look from

Also, it shows the Villa theme developing in the

below (it became a common theme). Here Titian merges heroism

altarpiece. Pesaro is a member of a family that the painting was

dedicated to. The diagonally arranged figures create a dynamic

by the Duke (not necessarily commissioned by him). 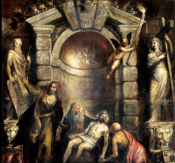 Palma was a younger pupil. Late style in Titian’s career

is sketchy… however, the tradition of rough painting

had a long legend after Titian.

religious… after crucifixion with Mary Magdalene

(usually depicted with long hair) on the left.

-Moving on to 16th century art in northern europe:

-In 16th century Northern Europe, there is a contact with Italian Renaissance…  figures are classical

Represent the altarpiece when it is closed, open

????Central Image: Left: Saint Sebastian (may be in

St. John the Baptist (although he died before the

Third Position: interior is carved wood and guilded sculptures; elaborate gothic frame like  the Ghent Altarpiece. The main figure is St. Anthony and scenes from his life are depicted  on the left and right.

~~the theme of healing & suffering/sickness is the underlying messages… “connection of  the healing of body and soul” is why St. John the Baptist is there.

Self Portrait (1500: oil on wood; an unsusual pose for a self

portrait. Durer represents himself Christlike. He is immitating

divine characteristics of a genius.

outline is in a copper plate w/ burin.

Melancolia I (1514): engraving; thought there were many types of

Melancolia and this depicts Melonchalia I.

represents religious figures; displayed in the town hall of Nuremberg so  it had a civil context (commission from the government of Nuremberg).

Hieronymus Bosch: a Netherlandish painter; we don’t know much about him

Garden of Earthly Delights (1505-1510): oil painting; a triptych; a large altarpiece (shown  open below); depicts a landscape view w/ little figures & imaginary motifs. Thus, there is  no clear iconic image & this is why it couldn’t really function as an altarpiece… it was in an

art collection (not in a church because ideologically, it was created for an audience that  collects artwork).

strange things such as

Joachim Patenir: a local painter & almost all his work

altarpiece; it was a private collection of art.

of gluttony & idea of giving to the poor & salvation…. Mary &

the Christ Child in the background

Netherlandish Proverb (1559): it shows his understanding of

Hunters in the Snow (1565): one of many paintings that

this tradition was from the Book of Hours

-Italy & Spain in the Baroque:

-In contrast to the simple, rational style in the Renaissance, Baroque artwork had  dramatic, exaggerated features and elaborate ornaments. Baroque artwork was irregular  and unequal… no rules of proportion.

-Annlabale Carracci: Italian painter; his gallery was in the

are arranged in panels that resemble framed pictures. It

a shadowy manner/ contrast of light and dark. Many

painters followed his naturalism and drama. However,

the impact of Caravaggio is short lived in Rome.

the Contarelli chapel. There is naturalism in the

religious painting; the light focuses on the tax

painting; located in the Cerasi Chapel. St. John the Baptist is in

the foreground, and his blood forms Caravaggio’s signature.

theme was heroic women; like Caravaggio, had tenebrism in her

dramatic lighting is similar to Caravaggio’s.

Self Portrait of as the Allegory of Painting (1630): oil on canvas; the  way she paints herself resembles a text called “Iconologia”, which  describes how human appearances should be depicted.

artwork is in a much more

fresco in Casino Rospigliosi in

Rome. He saw it as a quadro

Interior of Cornaro Chapel in Rome

of marble with rods arranged behind

the figures ???? Ecstasy of Saint

Theresa zoomed in shows the

City, Rome. The colonnade (rows of columns) set a

welcoming environment through which worshippers

Bernini early in his career.

fresco. It can be described by the adjective “baroque”, which

was a jewelers term referring to irregular shapes.

Martyrdom of Saint Phillip (1639): oil on canvas. Caravaggio’s  influence here is direct--- notice the drama & realism of the  figures. Scenes of Martyrdom in Spain were popular during  Counter-Reformation.

Diego Velazquez: Spanish painter; influenced by Caravaggio.  Notice that his paintings had delicate paint pigments that  seemed to flicker (unlike Titian a century earlier, whose paint  pigments were THICK).

Water Carrier of Seville (1619): oil on canvas. Seville was the  southwest part of Spain. It depicts the selling of flavored  water in a cellar. Iconography = the “genre of painting” of  images from the market/ selling food… still life. His painting  seems to have a deeper significance;

Las Meninas (1656): oil on canvas; also known as the Maids of  Honor; a late painting by Velasquez. It is an unusual painting  because it is a group painting on a large canvas. It depicts  Princess Margarita (the child in the center) & the rest of the  court. Additionally, it shows King Philip IV & the queen are  reflected in the mirror. It is possible that he got the mirror  idea from Jan Van Eyck’s painting of Arnolfini and his wife.

What are the stages of meiosis?

What is the meaning of intentional torts?