Description: Covers the first half of the learning objectives

∙ Why is the parasympathetic faster to respond but the sympathetic has a longer duration?

∙ What happens if DHP is inhibited?

What is the Nernst potential?

HUMAN PHYSIOLOGY EXTERNAL BRAIN CHAPTER I: MEMBRANE PHYSIOLOGY  1. Explain the importance of the cell membrane (LOC). Differentiate between simple and  facilitated diffusion, active transport, and co­transport across a membrane (MOC). Provide  examples of each and briefly describe how they work (MOC).  ∙ TheWe also discuss several other topics like pierre alexis delamair
We also discuss several other topics like How does the idea of mindlessness relate to persuasion?
We also discuss several other topics like acct 2331
If you want to learn more check out hphy
Don't forget about the age old question of hphy
If you want to learn more check out uo human physiology
cell membrane has hydrophilic and hydrophobic parts and a phospholipid bilayer with trans  membrane proteins that allow for molecules to be moved across the membrane.  o Hydrophilic head and hydrophobic tails. The tails point inward, preventing water from  traveling across the membrane ∙ Simple diffusion: Does not require a carrier and easily moves through channels o Does not move against the concentration gradient o Example: Potassium moving through the channel to get outside because there is a higher  concentration in the cell than outside. Moving from high to low concentrations ∙ Facilitated Diffusion: Requires a carrier and interaction with a protein ∙ Active Diffusion: Requires interaction with protein and a source of energy (ATP) o Example: Sodium trying to leave the inside of the cell against its concentration ∙ Co­transport: when a molecule attaches to another molecule that can go through the carrier  protein ∙ Factors that affect diffusion o Concentration differences o Membrane electric potential o Pressure differences 2. Describe the function of the Na+/K+ ATPase pump in maintaining membrane potential (LOC).  ∙Usually there is more sodium outside of the cell and more potassium inside (a banana in the ocean) ∙With the Na/K+ ATPase pump, the pump works to push sodium back outside of the cell and  potassium back inside. This is why there is so much sodium outside of the cell and so much  potassium inside the cell ∙Maintains the resting membrane potential and cell volume regulation as well as signal transduction 3. Define the Nernst Equation value (equilibrium potential; LOC). Determine the charge of the  equilibrium potential based on the concentration and charge of a theoretical ion (HOC). Apply the  concept underlying the equilibrium potential to questions about real or theoretical ions, and to explain the peaks and values of the action potential waveform (HOC).  ∙Nernst potentialo Electrical potential vs. chemical potential o Voltage between two sides of a membrane o Equilibrium potential is where the electrical potential = chemical potential in which there is no net movement o Example.  There is more chloride outside of the cell and the membrane potential is  negative. What is the Nernst potential?  The large amount of chloride ions outside of the cell will want to come into the cell  but because the membrane of the cell is negative, it will be repelled: arrows moving  in opposite direction so it is negative  Large amounts of Sodium inside the cell with a negative membrane potential:  Sodium will want to leave but because the membrane is negative and sodium is a  positive ion, it will want to stay in the cell: opposite arrows so negative  Negative indicates the ion is not leaving; positive indicates that the arrows are  moving in the same direction and there is movement across the membrane ∙ 4. Describe the function of Na+ and K+ ion channels and their role influencing the membrane potential  and electrochemical gradients during an action potential (LOC). Draw an action potential and label  depolarization, repolarization and hyperpolarization and where on the action potential waveform the  permeability for Na+ and K+ peaks (LOC). 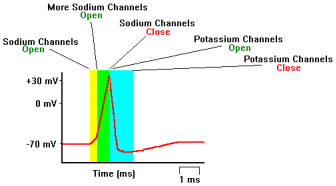 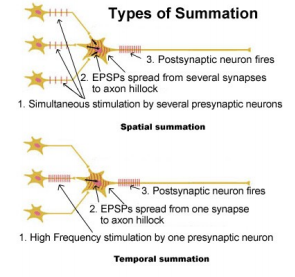 ∙ Calcium and relationship to exocytosis o When an action potential reaches the axon terminal of the presynaptic neuron, the voltage  gated Ca channels open. The opening of these channels signals for the release of the  neurotransmitter, Acetylcholine to leave the vesicles on the release sites  If calcium is inhibited on the presynaptic cleft, the neurotransmitter can not be  released and the action potential can not be transmitted across o A more intense stimulus means more frequent action potentials o Higher frequency of action potentials means the Calcium channels are opening more  frequently so there are more neurotransmitters being released  A stronger muscle contraction requires more frequent action potentials  With a higher frequency, the temporal summation will be closer together and are  more likely to make it to the trigger zone 10. Differentiate between ligand agonists and antagonists, as well as between cholinergic and adrenergic  receptors, and nicotinic and muscarinic cholinergic receptors (LOC). Be able to anticipate outcomes if  any part of the system is damaged/manipulated/poison (HOC). ∙ Ligand Agonists vs. Antagonists o Agonists: Activates the receptors and can bind to the same receptors as the  neurotransmitter  o Antagonist: Can bind to the same receptor but prevents activation so the ligand gated  ion channel will not open ∙ Cholinergic vs. Adrenergic o Cholinergic: uses acetylcholine  Nicotinic and Muscarinic ∙ Nicotinic: found on the ion channels ∙ Muscarinic: activates the gene protein complex which results in ion  channel opening and the 2nd messenger activation ∙ Nicotinic is found on postsynaptic ganglion in the parasympathetic and  sympathetic divisions o Excitatory receptors  ∙ Muscarinic is found on the target tissue of the parasympathetic branch  o Purpose is to increase or decrease the activity of the effector  cells o Adrenergic: uses norepinephrine and adrenaline  Found on the target tissues of the sympathetic branch  Beta and Alpha adrenergic receptors ∙ What is the difference between a hormone and a neurotransmitter o Hormones are secreted by endocrine glands and have a systematic effect  Norepinephrine on the sympathetic target tissue o Neurotransmitters are released at a synapse and specific to a part of the body  Acetylcholine at the cholinergic receptors HUMAN PHYSIOLOGY EXTERNAL BRAIN CHAPTER 2: G PROTEIN COUPLED RECEPTORS;  MUSCLE PHYSIOLOGY  11. Describe different ways in which extracellular signaling molecules can cause intracellular  effects (LOR). Draw the mechanism of G­protein coupled receptor activation (LOC).  Differentiate between G­protein alpha subunit actions and predict the outcomes of activation  or inactivation of specific GPCRs based on their alpha subunits (HOC). Predict the outcome  when any aspect of the system is modified (HOC).  ∙ Extracellular signaling and intracellular effects o Influx of sodium or chloride o Depolarization if there is an excitatory responseo Activation of the G protein ∙ G­protein coupled receptor activation o GDP subunit binds to the receptor in its inactive state o Alpha disassociates from beta and gamma unit when GTP binds   Inactive: GDP  Active: GTP o GTP binds to an enzyme which produces the 2nd messenger  Adenylatecyclase ∙ Converts the ATP cAMP o cAMP activates PKA which is used to activate proteins  Phospholipase C ∙ PIP2 IP3+ DAG o IP3: binds to the calcium channels and is responsible for its  release from the sarcoplasmic reticulum o DAG: activates protein kinase o Stimulatory G Protein: causes adenylate cyclase to increase the production of cAMP o Inhibitory G Protein: causes adenylate cyclase to decrease the production of cAMP o PDE deactivates cAMP which would lead to the deactivation of PKA which is used to activate certain proteins 12. Explain how an action potential in a motor neuron leads to an action potential in the associated skeletal muscle fiber (LOC).  ∙ Ach released into the synaptic cleft or the motor end plate via exocytosis ∙ Ach binds to the nicotinic cholinergic receptors ∙ Influx of Na+ and some K+ efflux through ligand gated channels ∙ Motor end­plate threshold is then reached so the voltage gated Na+ channels are open ∙ Action potentials occur along the sarcolemma via sequential opening of voltage gated Na+ and K+  channels’ ∙ A.P travels down the T­tubule ∙ Voltage Gated DHP receptors are activated  ∙ Mechanically linked RYR on the sarcoplasmic reticulum open and release the calcium into the cytoplasm 13. Describe how an action potential in the t­tubules leads to calcium release (LOC).14. Explain  how binding of calcium to troponin C leads to available actin binding sites (LOC). Describe the  process of cross bridge cycling and the steps involved as it relates to the hydrolysis of ATP to  ADP + Pi, the release of ADP + Pi, and the binding of ATP to the myosin head (LOC). Evaluate the outcome of hypothetical scenarios, such as a lack of ATP or calcium, addition of toxins, or  damage to various receptors (HOC). ∙ Calcium is released from the sarcoplasmic reticulum and then binds to the troponin C located on the  actin filament. Tropomyosin is moved out of the way so that the actin binding sites become available ∙ Myosin head attaches to the actin binding site and pulls on the filament ∙ ADP and the phosphate are released and ATP is swapped in∙ Once ATP attaches, the cross bridge breaks and 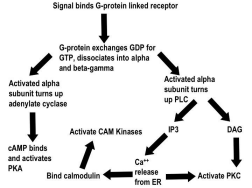 ryan was really looking forward to lunch because his mother had prepared a tuna salad sandwich. unfortunately, the mayonnaise she used had been left out too long and was spoiled. not long after eating the sandwich, ryan felt sick and had to rush to the ba