UNT / Physics / PHYS 1052 / if the terrestrial planets were formed by homogeneous accretion, then

Description: This guide is for Exam 3 chapter 19 only.

How long does it take a particle in the solar wind to reach Saturn?

Why do astronomers believe that the angular momentum problem is no longer an objection to the solar nebula problem?

CHAPTER 19—LIFE ON OTHER WORLDS Multiple Choice 1. The oldest rocks found on Earth are about 4.3 billion years old. 2.Which of the following is not a characteristic of the terrestrial plWe also discuss several other topics like calculus 3 temple university
Don't forget about the age old question of cop 2220 fau
If you want to learn more check out parallel enterprises has collected the following data on one of its products. during the period the company produced 25,000 units. the direct materials price variance is: direct materials standard (7 kg. @ $2/kg) $ 14 per finished unit actual cost of mate
We also discuss several other topics like math 3350
We also discuss several other topics like mgmt 200 purdue
We also discuss several other topics like the fundamental building block for all matter, which is the smallest representative sample of a substance that maintains chemical identity, is called
anets? Low average density 3.A future news release might report that a new planet has been found around a star very similar to our sun. This  newly discovered planet is claimed to have a mass 40 times that of Earth and is located nearly 25 AU  from the star it orbits. Which of the following would be a reasonable prediction about this planet? II. The planet will probably have a radius of around five to ten times greater than  Earth's. III. The planet will probably have several satellites. IV. The planet will probably have a composition that is mostly hydrogen and helium. 4.A(n) meteor is a solar system object that enters Earth's atmosphere and becomes very hot due to friction between  the object and Earth's atmosphere. 5.The age of the solar system is believed to be approximately 4.6 billions years old based on the data from ∙ samples of lunar rocks. ∙ samples of earth rocks. ∙ samples of meteorites. 6.Once a terrestrial planet had formed from a large number of planetesimals, heat from radioactive decay could have  melted it and allowed it to differentiate into a dense metallic core and a lower density crust. 7.The condensation sequence suggests that metals and metallic oxides should condense closest to the sun. 8.Condensation in the solar nebula probably led to the formation of ∙ icy grains beyond the present orbit of Jupiter. ∙ metallic grains near the present orbit of Mercury. ∙ silicate grains near the present orbit of Earth. 9.Protoplanets of the Jovian planets could have grown very hot from ∙ the infall of material at high velocity. 10.If the terrestrial planets formed by homogeneous accretion, then ∙ Earth's original atmosphere was rich in hydrogen.11.The planets all lie in nearly the same plane resulting in a disk like structure for the solar system. This disk like  structure is believed to exist because ∙ planetesimals settled into the plane. 12.Which one of the following objects is most like the planetesimals that formed in the solar nebular? ∙ asteroids 13.The large planetesimals would have grown faster than the smaller planetesimals because ∙ their stronger gravity would pull in more material. 14.Accretion among the grains in the solar nebula would have been aided by ∙ static electricity. 15.Based on current observations, Uranus has a heavy element core, and a very dense, deep atmosphere made mostly  of hydrogen. 16.If a star is found with five planets orbiting it, which of the planets would be expected to have the greatest  uncompressed density if the system was formed by a process like that described in the solar nebula  theory? ∙ ∙ The one closest to the star. 17.The current atmosphere of Earth is believed to be ∙ composed of gases that were baked from the rocks sometime after the planet  formed. 18.The most important effect in clearing the solar nebula of gas and dust was ∙ radiation pressure. 19.Why do astronomers believe that the angular momentum problem is no longer an objection to the solar nebula  problem? ∙ The sun's magnetic field interacted with gas leaving the nebula and slowed  the sun's rotation. 20.The discovery that Jovian­like planets are common around other stars and that gas and dust is swept out of the  solar neighborhood fairly early in the formation of a star suggests that ∙ the Jovian’s may have formed directly, without the core accretion phase. 21.Which of the following observations would support the solar nebula theory over the passing star hypothesis? ∙ Proving that most of the solar like stars near the sun also have planets  orbiting them. 22.On a photograph of the moon, the moon measures 30 cm in diameter, and a small crater measures 0.2 cm. The  moon's physical diameter is 1738 km, what is the physical diameter of the small crater? ∙ about 12 km23.The speed of the solar wind is approximately 400 km/s and the distance from the sun to Saturn is 9.5 AU (1 AU =  1.5 10

8 km). How long does it take a particle in the solar wind to reach Saturn? ∙ about 41 days 24.Suppose that Mercury grew to its present size in 1 million years through the accretion of particles averaging 100 g  each. On average how many particles did Mercury capture each second? Note: Mercury has a mass of 3.3

1023 kg and a radius of 2439 km. ∙ about 100 billion particles per second 25.The diagram below illustrates the radioactive decay of Potassium (40K), which has a half­life of 1.3 billion years. If a lunar rock is found that currently contains 5 grams of 40K, and it is determined that the sample contained 20 grams when it was formed, how old is the lunar rock? 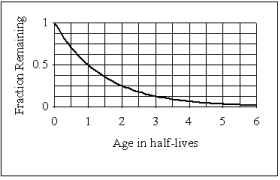 ∙ 2.6 billion years True/False Statements: 26.The oldest objects found so far in our solar system are earth rocks that are 3.9 billion years old. False  27.The Jovian planets have lower average densities than the terrestrial planets. True 28.The original cloud from which the sun and planets formed had a composition rich in hydrogen and helium. True 29.The present motions of the planets were inherited from the rotation of the solar nebula. True 30.The condensation sequence cannot explain the composition of the terrestrial and Jovian planets. False 31.When particles in the solar nebula grew large enough, they stopped growing by accretion and began growing by  condensation. False32.Observations in the infrared have detected dusty nebulae around nearby stars such as Vega. True 33.Outgassing refers to the formation of an atmosphere by the attraction of gases from the surrounding nebula. False 34.Heterogeneous accretion means that all of the particles that formed a planet had the same composition. False 35.The pressure of sunlight was one of the forces that cleared the solar nebula. True