What refers to the process where a cell duplicates itself to form two identical cells?

a. Process where a cell duplicates itself to form two identical cells

b. Happens in Prokaryotes

B. Mitosis and Meiosis.

a. The Cell Cycle is divided into Interphase and M-phase.

i. Interphase is composed of 4 sub-phases

1. G0—where the cell rests and is not actively dividing

2. G1—where the cell grows in preparation for duplicated DNA

4. G2—where the cell grows again so that it can handle the expansion of

What is the meaning of cyclin-dependent kinases cdks?

If you want to learn more check out What is thinking?

ii. M-phase is then subdivided into 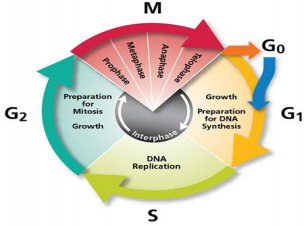 Don't forget about the age old question of Who is claude mckay?

A. The cell cycle has to be regulated in order to divide at the appropriate time (and not do the whole  cancer thing)

b. Kinase means it catalyzes phosphorylation

c. Cyclin levels spike when the cell is ready to divide and when they are at high levels, they  activate the CDKs which then regulate every stage of cell division

d. There are 3 groups of CDK complexes each named for the stage of the cell cycle they are  in (G1/S, S, M)

B. The Cell cycle has 3 checkpoints to maintain fidelity (correctness) of the process a. These checkpoints occur at the end of G1 and G2, and beginning of M-phase

b. p53 is a specific protein that blocks the export process for DNA that is damaged and so  prevents certain types of cancer.

c. P21 is also a tumor suppressor (like p53) and inhibits cell division.

A. Oncogenes are a species of gene from viruses which are cancer causing genes.  a. Proto-oncogenes are the un-mutated form of the oncogene. Don't forget about the age old question of What are the two parts of a recursive definition?

B. Tumor Suppressors are a family of genes that safeguard against cancer because they encode  proteins that inhibit cell division

a. Most cancers occur in situations where there are many mutations since there are specific  proteins that fight against individual mutations.

C. Necrosis happens when a cell is a damaged or starved cell which swells and bursts—often causes  inflammation in body.

D. Apoptosis happens when a cell is programmed to die either because it’s defective or it’s no longer  needed.

A. Meselson and Stahl’s experiments

a. Used radioactive isotopes to identify where the split strands went during DNA replication b. This lead to 3 hypotheses, Conservative, Semiconservative, and Dispersive.

c. They proved Semiconservative using a centrifuge to see what happens to the parent DNA  strands.

d. To replicate, a DNA helix is split (by a molecule called Helicase) such that each of the  two strands can become a Template Strand for the synthesis of a Daughter Strand.  e. Semiconservative Replication is the way a DNA duplex is replicated

f. It involves the parent strand being split apart and each template strand binding with its  newly synthesized daughter strand. We also discuss several other topics like Why does the organic nature of vitamins matter? 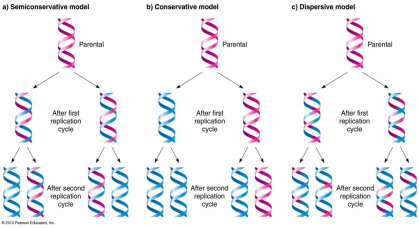 a. In order for DNA to be synthesized, the hydrogen bonds between the base pairs need to  be split so that they can be read. This is done at the Replication Fork

b. DNA (and RNA) strands can only grow in the direction of their 3’ end, so nucleotides are  added to the daughter strand in only the direction of its 3’ end. If you want to learn more check out What is the pricing power of monopoly?
Don't forget about the age old question of What are the components of community?

i. This addition is done by a DNA Polymerase.

C. Since DNA strands are antiparallel, that means that one daughter strand will grow in one direction  while the other grows in the other. 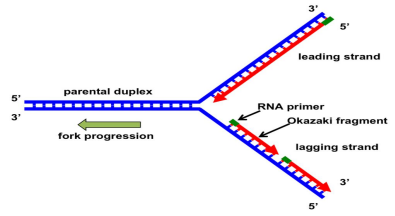 d. In order for DNA to begin synthesizing it must have a starter molecule, called an RNA  Primer, attach to the template strand to help nucleotides begin binding on the Template  strand.

i. This primer is made by RNA Primase (so creative)

ii. It is important to note that the lagging strand will have many such primers  because it has to start and stop its synthesis multiple times—creating Okazaki  fragments.

e. DNA Ligase is the enzyme that connects these Okazaki fragments and disposes of the  primers.

a. DNA polymerase can proofread its strand as a separate enzymatic activity from strand  elongation.

b. If an incorrect nucleotide has been added, the proofreading function removes it then adds  the correct one.

E. DNA replication is not very accurate near the ends of the strands to Telomeres (repeating  sections) cover the ends.

F. Because and RNA primer does not attach precisely to the 3’ end of the template strand, the  daughter strand is shorter for each round of replication.

a. Telomerase restores the length of these daughter strands.

b. To avoid losing genetic data, the ends of every DNA strand are capped with a repeating  sequence called a Telomere.

c. Telomerase is fully active in Germ cells and Stem cells but not Somatic cells. G. PCR is used to replicate sections of a DNA strand many times. the 3 steps are below a. DNA is first Denatured, usually in high temperatures.

b. Primers then anneal to DNA strands

a. Once the segments are made, they can be separated by size by placing them in a gel in a  water bath and running an electric current through it.

b. The negatively charged DNA will migrate to the positive end of the current

c. The speed of the fragment is then determined by is size and ability to move through the  gel. So smaller strands can go faster (and therefore will be closer to the positive end by  the end of the experiment).

d. Electrophoresis is usually done with a standard, or Ladder, which is a DNA strand that  we know the lengths of and so can measure the unknowns based upon the known lengths  and distances traveled.

I. Cutting DNA sequences at various lengths is useful for DNA sequencing and recombinant technology

b. Restriction sites are typically 4-6 base pairs long and are usually palindromic Chapter 13

a. A genome is the genetic material of an organism, organelle, or virus (in RNA) that is  transmitted to the next generation.

B. DNA in genomes has many repeated sections

a. Tandem Repeats—where the repeated sections are all adjacent to each other.

b. Dispersed Repeats—where the repeated sections are separated but close enough to be  grouped together.

c. Simple-sequence Repeats—where short sequences (like TA) are repeated, and example  of this is a Telomere.

d. Highly Repetitive DNA sequences usually have no coding function and can be part of the  centromere.

f. Transposable Elements make up about 45% of human genome and serve to increase  diversity.

a. A sequence motif is a telltale sequence that indicates what type of sequence it is (like a  signature)

i. An example is of an open reading frame, the strand of DNA is a long strand that  encodes only Amino Acids and has no stop codon.

b. We use these motifs to determine whether a section of DNA encodes for exon or intron  by comparing the Genome to the mRNA sequence (remember introns are taken out of the  sequence, yes it is backwards)

a. Genomes have their own families, related through function and structure.

b. Globin is a gene family

c. These guys are usually clustered near each other in the genome.

a. The mustard plant has more protein coding genes than we do.

A. Mutations are Rare events/alterations in the nucleotide sequence that are heritable changes in  DNA.

a. Somatic mutations occur in body cells and the mutations are passed on to daughter cell  but not offspring—that is they do not affect your overall genetic makeup

b. Germ line mutations occur in cells that produce gametes

B. Mutations have 4 Phenotypic effects.

a. Silent mutations—don’t affect protein function, basically do nothing

b. Loss of function—happens through structural change in proteins or enzymes

e. These can occur at the molecular level as

C. Mutations can be

a. Missense—where a base is substituted, resulting in a different amino acid.

i. Affects can vary, including no affect.

b. Nonsense—a base substitution results in a stop codon.

i. Results in nonfunctional protein.

c. Frame shift—where DNA was read at a different starting point and so the sequence got  changed (instead of ATGAT it is read GATAT)

D. 3 types of Mutation repair. –remember that polymerase has a proofreading mechanism also. a. Mismatch Repair

b. Base Excision Repair

i. Enzymes scan DNA for damaged or incorrect bases, when found they are cut out.  (excised)

i. Same as above except that instead of cutting out bases, the backbone is cut out  and replaced

a. Lederberg experiment set out to see if mutations are induced by environment or if they  are random.

F. Mutation Rates vary between organisms (men usually have more mutations than women) a. Humans have about 30 mutations per generation

b. These add to the genetic diversity and uniqueness of everyone. 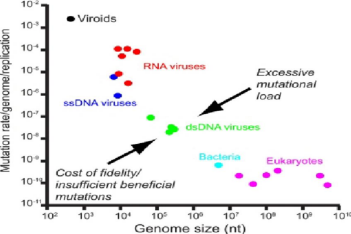 b. Phenotype—appearance based on genotype and environment ( being tan by environment  and Caucasian by genotype allowing you to be tan)

c. Polymorphism—Variation in DNA that is too common to be mutation

e. Homozygous—individual that has 2 copies of the same allele

f. Heterozygous—individual that has 2 different alleles.

a. Some mutations make you more or less susceptible to disease

i. BRCA1 and 2 are mutations that can lead to breast cancer

ii. Also, being lactose tolerant is a mutation

b. Some environments can also lead to cancer

i. Too much sun can lead to skin cancer

a. Take certain alleles (which are different for everybody) and put them through  electrophoresis to see how they are unique

b. The ending placement of the bars in the gel after electrophoresis shows the difference

i. This means you can identify which ones are the same too. This allows for DNA  matching.

D. SNPs (Single Nucleotide Polymorphism—polymorphism is the common variation) a. Where a single base-pair change makes a large difference as in eye color

b. In two people, at the exact same spot in their alleles, a single base pair of G-C makes eyes  blue while the pair T-A makes them brown.

a. CNV is the difference among individuals in the number of copies of a specific gene or  part of a gene.

b. These extra copies can involve large regions of a genome and even a whole gene. F. Nondisjunction Errors

a. Happen when homologous chromosomes—or sister chromatids—do not separate  properly in anaphase.

b. Results in either

i. Aneuploidy—1 too many or few sets of chromosomes

ii. Polyploidy—way too many or few sets of chromosomes.

c. In humans, having an extra set of chromosome 21 makes for Down Syndrome

Why is uvc absorbed by the ozone layer?

What are three muscle tissue types found among animals?