Description: These notes cover everything in the textbook from Chapter 1-25.

o Comparative Advantage: the ability of an individual, a firm, or a country to produce a good or service at a lower opportunity cost than competitors ∙ What are the Four Factors of Production?

o Positive Analysis: analysis concerned with WHAT IS o Normative Analysis: analysis concerned with WHAT OUGHT TO BE ∙ Other Definitions  o Trade­Off: the idea that, because of scarcity, producing more of one good or service means producing less of another  good or service  o Voluntary Exchange: a situation that occurs in markets when both the  buyer and the seller of a product are made better off by the transaction o Equity: the fair distribution of economic benefits o Economic Variables: something measurable that can have different valuesChapter 2: Trade Offs, Comparative Advantage, and the Market System ∙ Production Possibilities Frontier (PPF): a curve showing the maximum attainable  combinations of two goods that can produced with available resources and  technology 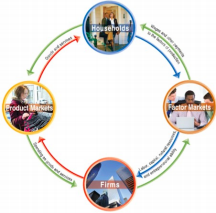 3. Natural Resources 4. Entrepreneurial Ability  ∙ Other Definitinos  o Economic Growth: the ability of the economy to icnrease the production of goods and services  o Free Market: a market with few government restrictions on how a good or service can be produced or sold, or on how a factor of production can be employed o Property Rights: the rights individuals or firms have to the exclusive use of their property, including the right to buy or sell itChapter 4: Economic Efficiency, Government Price Setting, and Taxes ∙ Consumer Surplus vs. Producer Surplus o Consumer Surplus: the difference between the highest price a consumer is  willing to pay for a good or service and that actually price they pay o Producer Surplus: the different between the lower price a firm would be  willing to accept for a good or service and price it actually receives

∙ Economic Efficiency: a market outcome in which the marginal benefit to  consumers of the last unit produced is equal to its marginal cost of production and in which the sum of the consumer surplus and producer surplus is at a maximum 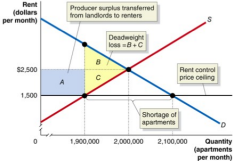 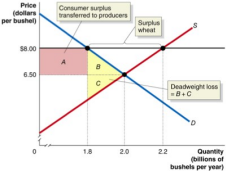 ∙ The Effect of a Tax on the Market ∙ Tax Incidence  o Tax Incidence: the actual division of the burden of a tax between buyers  and sellers in a market  A steep slope signifies that buyers bear the burden of the tax  A shallower slope signifies that sellers bear the burden of the tax ∙ Other Definitions o Marginal Benefit: the additional benefit to a consumer from consuming  one more unit of a good or service o Marginal Cost: the additional cost to a firm of producing one more unit of  a good or service o Black Market: a market in which buying and selling take place at prices  that violate government price regulationsChapter 5: Externalities, Environmental Policies, and Public Goods ∙ Externality: a benefit or cost that affects someone who is not directly involved in  the production or consumption of a good or service o Social Cost: the total cost to society of producing a good or service,  including both the private cost and any external cost

o This is an example of a negative externality  (pollution) o There are also positive externalities  Private Benefit: the benefit received by the consumer of a good or  service  Social Benefit: the total benefit from consuming a good or service,  including both the private and any external benefit

o ***Overproduction with negative externalities, Underproduction with  positive externalities \  property rights pose as a solution to the externality problem ∙ Market Failure: a situation in which the market fails to produce the efficient level  of output  ∙ The Coase Theorem: private parties could solve the externality problem through  private bargaining, provided (1) property rights are assigned and enforceable and  (2) transaction costs are low o Transaction Costs: the costs in time and other resources that parties incur  in the process of agreeing to and carrying out an exchange of goods or  services∙ Government Policies to Deal with Externalities 1. Taxing Negative Externalities  If the government imposes a tax equal to the cost of the  pollution, the utilities will internalize the externality

2. Subsidies  Subsidies: an amount paid to producers or consumers to

encourage the production or consumption of a good ∙ Pigovian Taxes and Subsidies: the use of government taxes and subsidies bring  about an efficient level of output in the presence of externalities o Double Dividend of Taxation: since Pigovian taxes and subsidies increase  efficiency while bringing in tax revenue, then this allows inefficiency causing taxes in other markets to be reduced ∙ Other Definitions o Command and Control: a policy that involves the government imposing  quantitative limits on the amount of pollution control devices  ∙ Rivalry and Excludability o Rivalry: the situation that occurs when one person’s consuming a unit of a  good means no one else can consume it o Excludability: the situation in which anyone who does not pay for a good  cannot use it ∙ Types of Goods  ∙        Free Ride: when people  enjoy the benefits of public  goods without paying for them ∙ The Tragedy of the Commons: 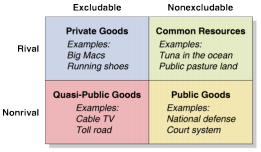 which of the following refers to the amount of client money that agencies spend on media purchases and other equivalent activities?