CLEMSON / Psychology / PSYC 3240 / The most transparent membrane in front of the eye is called what?

o Different wavelengths are experienced as different colors o There is no such thing as red-NESS, it is just a continuum o Colors exist only in our own experience of the world o Insects can see ultraviolet light

o X ray vision goes through too many things - there is no  reflection, you wouldn't be able to see an object as well o We don't have radio waves because (you would be able to  call your friend with your mind) they are too large, they go  around things too much, you would not be able to focus on  objects

What is the meaning of lens in the eye?

If you want to learn more check out According to old thinking, the appendix is considered as what?

∙ Spectrum - starts with gamma waves (vibrate very fast, small  wavelength) - to radio waves with huge wavelengths Don't forget about the age old question of What is the number one most populated county in the world?

o Because we have a range of wavelengths - we do not  measure the frequency of them (Hz), distance measure is  preferred - distance between a wave (cycle of the wave) -  unit: nm, billionth of a meter

o Our eyes are specialized to see visible light because that  light is the most informative Don't forget about the age old question of Enumerate some factors that leads to crime.

∙ Water and gases allow light to go through them

∙ Cornea - most transparent membrane in front of the eye - most  important lens, allows light to go to the back of it

o Lasik changes the properties of the cornea

The neural tissue and photoreceptors located on the inner surface of the posterior portion of the eye are called what?

o Its shape can be changed by contraction of ciliary  muscles, is flexible - the muscles attached to it pulls on the  lens allowing it to pull and thicken and allows sharper visual  perception (allows us to see something more clearly) We also discuss several other topics like Was the birth of massachusetts bay colony focused on religious liberty?

∙ Retina: the neural tissue and photoreceptors located on the  inner surface of the posterior portion of the eye

∙ Amacrine cells (neurons) - make synaptic  connections across in the horizontal direction ∙ Ganglion cells - contains optic nerve fibers -  processes and sends signal to the brain through its axons - cluster together and form a cable called the optic  nerve, carries a ton of info to the brain

∙ Layers: photoreceptor layers (rods and cones) -  bipolar layer (bipolar, horizontal and amacrine), then  ganglion cell layer Don't forget about the age old question of List down the steps on how to conduct a hypothesis test.

∙ Center of the retina is the fovea (0˚)

 There are no rods in the central region, cones  are found tightly packed in the fovea (central  region)

 Rods are found around the periphery of the  fovea If you want to learn more check out What are the different approaches on language development?

∙ Nothing is detected here

∙ Why is there a blind spot? Corresponds  to where the optic nerve comes out of the eye -  There is no gap in the retina, the axons of

ganglion cells have to get out 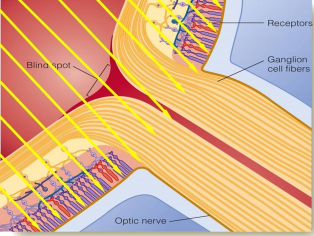 ∙ Light can go through the retina - get transformed  into electricity, send excitatory NT into the cell 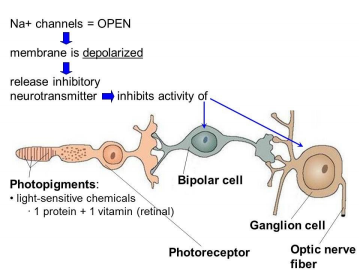 o Sodium channels opening means the neurons are active o When light comes through the retina, and photons

bombard photopigements, retinol gets knocked off, which  ultimately causes the sodium channels in the membrane of  the receptor to close 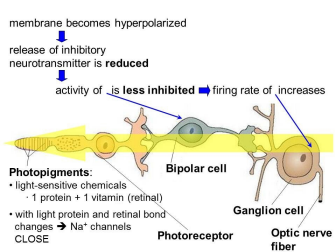 ∙ No rods in the fovea

∙ Provides us with our night vision system

∙ Detect different levels of light and dark, NOT colors ∙ Most concentrated away from fovea

∙ 3 kinds of iodopsin: each reacts to unequal

∙ Most concentrated in the fovea

∙ What is the connection between cones and ganglion  cells - where you start seeing visual perception?

 You would see that there tends to be a 1:1  connection between photoreceptors and ganglion  cells in the fovea - means that the patch of retina the ganglion cells are receiving information from are  extremely small

 Receptive field in center of retina (fovea):  area of the retina from which a ganglion cell  receives input

 Receptive field in the periphery of the retina  contains one ganglion cell that corresponds to a  variety of photoreceptors (mostly rods, maybe some  cones)

∙ As you move away from the retina, visual acuity gets sloppier and sloppier

 "Retina display" - very sharp image, you  cannot see the pixels in the screen; the pixels are  smaller than the smallest receptive field in the fovea 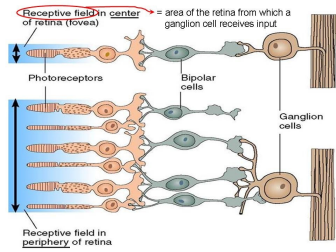 Visual field: part of the environment that is registered on the retina  (technically both of the retinas and the image they conduct) 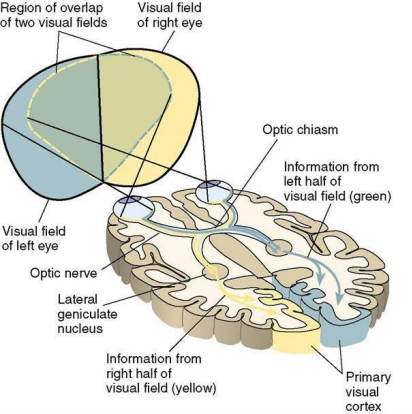 ∙ There are two VFs one for left eye and one for right eye. They  overlap slightly (binocular field)

∙ Nasal side is closest to the nose

∙ Next the information goes to the Lateral Geniculate Nuclei  (LGN) of the Thalamus (major sensory relaying station for the  brain)- first brain station, relays visual information to the cortex

∙ Retinal tectal pathway: small pathway (the 10%) that is NOT  involved in giving us conscious experience from anything -  coordinating eye movements in response to visual stimulation

∙ There is no conscious experience but it still effects  their behavior

∙ Retinal disparity: Discrepancy in the location of an object's  image on the two retinas as a function of the object's distance o The image that goes to the back of your eye is two  dimensional so the brain has to reconstruct the 3rd  dimension - this is made so easily because our eyes are closer together

∙ Not all species percieve in the same way (dogs and cats have a  very reduced experience of color, and some animals do not see  color at all, while others see somethings that we cannot  (ultraviolet light in insects))

o There are no gaps in the physical stimulus but we see the  continuum to have these gaps between colors (green to  yellow, etc.)

o Berries - we can see them, they are bad for us. If we eat  them and survive we would remember that the RED berries  are no good.

berries from the good berries as easily 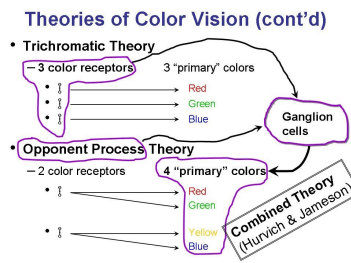 o People are given color cards and are asked to pick out the  pure colors - many will always pick out red, green, blue, and  yellow

o Trichromatic Theory: von Helmholtz and Young ∙ All colors are the result of the processing of three  "pure" colors: red, green, and blue, each one detected  by a specific receptor

∙ Speculated that there were 3 types of cones, red,  green and blue

 Receptor for red and green: photochemical ∙ Shine a red light on it and it is broken  down

∙ Blue light aids build up of the

 Thought that there are only two types of cones in the retina, solves the problem of trichromatic  theory

o Current theory is a combination of the two

another for blue and yellow)

∙ BOTH of them are correct - combined theory!

 3 types of cones in the retina (green, red and  blue)

 Opponent processing - happened at the

ganglion level - NOT at the photoreceptor level,

which was thought before

∙ Red light - the red cone is most affected

by it; when it is activated there is an inhibitory

∙ Close the eye there is green light on the

on the RG ganglion cell fires faster - you see

activates both red and green cones at the same

time - excitatory and inhibitory cancels each

other out - you see neither red nor green, red

sends inputs when red and green are stimulated

∙ The band with the edge by the lighter band seems  darker than the side of the band next to the darker band  - this is an illusion because it is actually the same color. ∙ Caused by lateral inhibition

o We have a retina with rods, the bipolar layer excites some  cell and inhibits some neighboring ganglion cells

photoreceptor #6 (because the stimulus is weak)

photoreceptor #8 (because the stimulus is stronger

o At edges, ganglion cells get differential amounts of  inhibition from darker edge and brighter edge = makes the  edge stand out perceptually

o Full stimulus on the entire receptive field: does not  change the rate of firing of the ganglion cell

∙ Receptive field: area of the retina from which a neuron receives input

o Simple cells in visual cortex: respond to edges at a specific orientation and place of the retina

o Complex cells in the visual cortex: respond to edges  moving across the retina

∙ Groups of simple cells cause stimulation of a

∙ Spatial Frequency theory: Some neurons perform a Fourier  analysis of the luminosity variations of a scene

∙ Need neurons sensitive to both

According to william wudnt, what is the difference between the physical and pscyhological world?

Who is the king of who spread buddhism and was known as the constantine of buddhism?