What is the most likely evolutionary advantage for this difference in body shape?

How does the same population of moths produce such different­looking caterpillars on the same trees?

What are the domains?

A) depicts the three major domains of life B) includes unicellular but not multicellular life D) family 3) Prokaryotes are classified as belonging to  two different domains. What are the  domains? A) Bacteria and Eukarya B) Archaea and Monera C) Bacteria and Protista D) Bacteria and Archaea 4) Which of these provides evidence of the  common ancestry of all life? A) near universality of the genetic code B) structure of the nucleus C) structure of cilia D) structure of chloroplasts C) includes unicellular and some forms of multicellular life, but not complex animals  and plants D) includes noncellular life­forms 6) You find yourself standing next to a beautiful rose bush. Which of the following do you and the rose  have in common? A) You both are multicellular. B) You both lack a membrane­bound nucleus. C) You are both prokaryotic. D) You and the rose have nothing in common. The following experiment is used for the corresponding question(s).A researcher discovered a species of moth that lays its eggs on oak trees. Eggs are laid at two distinct  times of the year: early in spring when the oak trees are flowering and in midsummer when flowering is past. Caterpillars from eggs that hatch in spring feed on oak flowers and look like oak flowers. But  caterpillars that hatch in summer feed on oak leaves and look like oak twigs. How does the same population of moths produce such different­looking caterpillars on the same trees?  To answer this question, the biologist caught many female moths from the same population and  collected their eggs. He put at least one egg from each female into eight identical cups. The eggs  hatched, and at least two larvae from each female were maintained in one of the four temperature and  light conditions listed below. 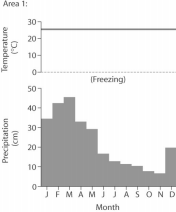 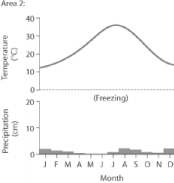 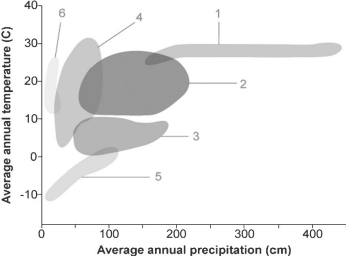 variation in annual precipitation? A) 1 B) 2 C) 3 D) 4 17) In deep water, which of the following abiotic  factors would most limit productivity? A) temperature B) light availability C) solute concentration 18) A certain species of pine tree survives only in scattered locations at elevations above 2800  meters in the western United States. To  understand why this tree grows only in these  specific places, an ecologist should ____. A) study the anatomy and physiology of this species B) investigate the various biotic and abiotic  factors that are unique to high altitude C) analyze the soils found in the vicinity of  these trees, looking for unique chemicals that may support their growth D) collect data on temperature, wind, and  precipitation at several of these locations for a year 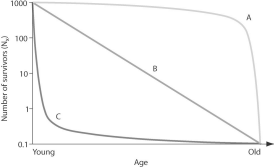 19) In the figure above, which of the following survivorship curves most applies to humans living in  developed countries? A) curve A B) curve B C) curve C D) curve A or curve B 20)

In the figure above, which of the following survivorship curves applies to most plant species? A) curve A B) curve B C) curve C D) All 3 curves 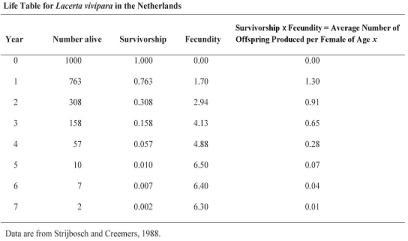 21) Using the table above, determine which age  class year would hurt the population growth  most if it were wiped out by disease. A) age class year 1 B) age class year 2 C) age class year 3 D) age class year 4 22) Suppose researchers marked 800 turtles and  later were able to trap a total of 300  individuals in that population, of which 150  were marked. What is the estimate for total  population size? A) 200 B) 1050 C) 1600 D) 2100 23) Which of the following assumptions have to  be made regarding the mark­recapture  estimate of population size? I)   Marked and unmarked individuals have  the same probability of being trapped. II)  The marked individuals have thoroughly  mixed with the population after being  marked. III) No individuals have entered or left the  population by immigration or emigration, and no individuals have been added by birth or  eliminated by death during the course of the  estimate. A) I only B) II only C) I and II only D) I, II, and III24) To measure the population of lake trout in a  250­hectare lake, 400 individual trout were  netted and marked with a fin clip, then  returned to the lake. The next week, the lake  was netted again, and out of the 200 lake  trout that were caught, 50 had fin clips. Using the mark­recapture estimate, the lake trout  population size could be closest to which of  the following? A) 200 B) 400 C) 1,600 D) 80,000 25) A population is correctly defined as having  which of the following characteristics? I)   inhabiting the same general area II)  belonging to the same species III) possessing a constant and uniform  density and dispersion A) III only B) I and II only C) II and III only D) I, II, and III 29) 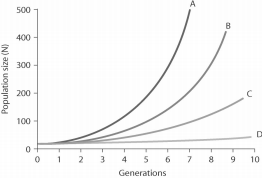 26) An ecologist recorded twelve white­tailed  deer, Odocoileus virginianus, per square  kilometer in one woodlot and twenty per  square kilometer in another woodlot. What  was the ecologist comparing? A) density B) dispersion C) carrying capacity D) range 27) Uniform spacing patterns in plants such as  the creosote bush are most often associated  with ____. A) patterns of high humidity B) the random distribution of seeds C) competitive interaction between  individuals of the same population D) the concentration of nutrients within the  population's range 28) In July 2008, the United States had a  population of approximately 302,000,000  people. How many Americans were there in  July 2009, if the estimated 2008 birth rate  was 0.018 and the death rate was 0.009? A) 2,700,000 B) 303,000,000 C) 304,700,000 D) 400 million In the figure above, which of the lines represents the highest per­capita rate increase (r)? A) line AB) line B C) line C D) line D 30) A population of ground squirrels has an  annual per capita birth rate of 0.06 and an  annual per capita death rate of 0.02. Calculate an estimate of the total number of individuals added to (or lost from) a population of 1000  individuals in one year. A) 120 individuals added B) 40 individuals added C) 20 individuals added D) 400 individuals added 31) Which of the following graphs illustrates the  population growth curve of single bacterium  growing in a flask of ideal medium at  optimum temperature over a two­hour  period? A) 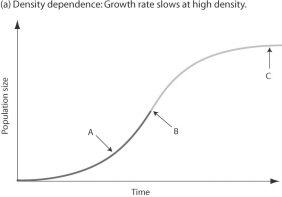 How to find the Laplace Transform?