∙ Key equations will be provided on the exam.

∙ Bring a calculator to the test. Cell phone calculator will not be permitted.

1. Can actual GDP surpass full GDP? Why or why not?

2. Explain the different types of unemployment

What is the natural rate of unemployment?

Don't forget about the age old question of lazefaire

3. What is the natural rate of unemployment?

Unemployment rate when the economy is producing at full GDP, frictional and  structural unemployment are signs of a healthy economy

4. Is the population of a country equal to its labor force?

5. Explain the equity and the efficiency costs of inflation.

What is consumption smoothing?

6. Understand how CPI and GDP Deflator are calculated and how to derive the  inflation rate using the two price indexes. 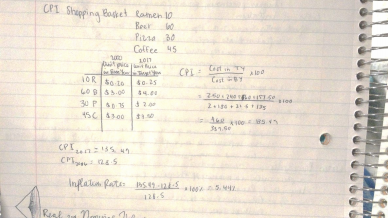 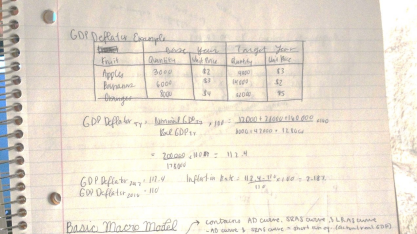 8. What is consumption smoothing?

A stable path of consumption regardless of current income. People try to optimize  their lifetime standard of living by ensuring a proper balance of spending and saving during different phases of life.

9. What is marginal propensity to consume?  We also discuss several other topics like hilly flanks theory

10.What is autonomous consumption?

The minimal level of consumption or spending that must take place even if a  consumer has no disposable income, such as spending for non-basic necessities.

Factors that cause net exports to change are the GDP of the country it exports to  and the currency value. When exports decline, the AD curve shifts to the left.

12.Understand and explain the factors that cause the exchange rate to change.  Illustrate and explain with a foreign exchange market graph.

13.Explain how the economy can recover from a recession without government  help. Use the AD-AS diagram and the Labor Market diagram to help illustrate  your answer. 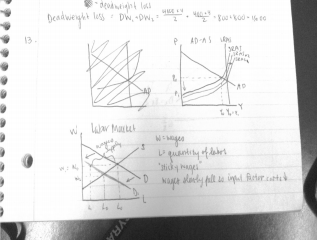 14.Compare and contrast the views held by Classical economists to those held  by Keynesian economists.

Classical- government should adopt laissez-faire policies, wage and price adjust  quickly to restore the economy to full GDP, the economy is too complex for people We also discuss several other topics like mountain of motor development

running the government to know what and how much to help, government help may even make things worse

Keynesian- government should actively intervene to steer the economy to full employment GDP, wage and price are sticky, particularly “downward sticky”,  recession and high unemployment mat persist for many years

Both believe that the economy can adjust.

15.What is the fractional reserve system?

16.How do banks create money? Explain using the T-accounts.  They make profits by loaning out excess reserves, creating money in the process.

17.Explain how open market operations work and their effects on interest rate,  supply of liquidity, and eventually on AD, price level, and actual real GDP.  Differentiate the effects of open market purchases from the effects of open  market sales. Illustrate and explain with the Long-Term Capital Market graph  and the AD-AS graph.  If you want to learn more check out in terms of making a purchase, the value of a product can derive from an enduring belief shared by a society that a specific mode of conduct is personally or socially preferable to another mode of conduct.

19.How does government borrowing crowd out private investment? Illustrate and explain with the Long-Term Capital Market graph. 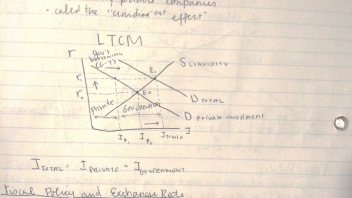 21.Use the concepts of consumer surplus and producer surplus to explain the  economic welfare impact in a market when a country goes from no trade  (autarky) to free trade. Illustrate and explain with a supply-and-demand  graph. Analyze the case of imports as well as the case of exports.

A country imports a good because other countries can produce it at a lower cost.  This causes the price to decrease and the consumption to increase.

22.Use the concepts of consumer surplus and producer surplus to explain the  economic welfare impact in a market when the government of a country  imposes a tariff on imports. Illustrate and explain with a supply-and-demand  graph.

23.Explain how the government of a country can keep its currency value low.  Illustrate and explain with a foreign exchange market graph.

If the government wants to encourage domestic industries to export to other  countries, it can keep its currency value low through currency manipulation. They

buy and sell foreign currency in exchange for their own domestic currency,  generally with the intention of influencing the exchange rate.

24.What are some ways the government of a country can subsidize its domestic  industries to encourage exports?

25.Suppose the market for good X in country A can be represented by the supply and demand curves below (graph not to scale). In autarky (no trade), the  equilibrium price is $16 and the equilibrium quantity is 1,400. Assume  country A is a small economy and when it opens up to trade, it takes the  world price of $6 as the price of good X. Answer the following questions.  (Note: derive numerical answers)

b. How much quantity of good X does country A import after it opens up  to trade? What is the total value of the imports? (Note: value = price  x quantity)

d. How big is the (net) gain from trade?

e. Suppose that the government of country A bows to pressure from  domestic producers of good X and levies a tariff on good X imports.  The tariff raises the price of good X from $6 to $10. How much tariff  revenue does the government collect?

f. (Continuing from e.) How big is the deadweight loss from the tariff?

How do we explain cooperation among unrelated individuals?