61 Pages 233 Views 0 Unlocks
Reviews
MACROECONOMICS FINAL STUDY GUIDE Chapter 8: Unemployment & Inflation 1. Employment: The total number of people currently  employed for pay in the economy either full time or part  time  2. Unemployment: The total number of people who are  actively looking for work but aren’t currently employed  3. Labor force: all workers, employed or unemployed – the  sum of employment and unemployment  4. Labor force participation rate: percentage of the  working-age population that is in the labor force  a. legal working age is 16+ -- only counts those who are  above 16 and a part of the labor force  b. take a small random sample that would closely  represent the US  Labor force participation rate = (Labor force / Population  age 16 and older)x 100  5. Unemployment rate: The percentage of the total number  of people in the labor force who are unemployed  a. The unemployment rate is a good indicator of how easy or difficult it is to find a job given the current state of  the economy  Unemployment rate = (Number of unemployed workers /  Labor Force) x 100 6. Discouraged Workers: Individuals who want to work but  who have state to government researches that they aren’t  currently searching for a job because they see little prospect  of finding one given the state of the job market  a. The unemployment rate does not count  discouraged workers 7. Marginally Attached Workers: Non-working individuals  who say they would like a job and have looked for work in  the recent past but are not currently looking for work  a. The unemployment rate does not count  marginally attached workers  8. Underemployed Workers : Workers who would like to find  full-time jobs but are currently working part time for  “economic reasons” – that is, they can’t find a full-time job  a. The unemployment rate does not count  underemployed workers   Adult population 200 million Labor force 150 million Employed 138.75 million Discouraged workers 10.5 million

According to the table, what is the unemployment rate and what is the labor force participation rate?

If you want to learn more check out What are the six dimensions of wellness?

According to the table, what is the unemployment rate and what  is the labor force participation rate?  Unemployment = ((150-138.75)/150) x 100 Labor force participation rate = (150/200) x 100 = 75% 9. Jobless Recovery: A period in which real GDP growth rate  is positive but the unemployment rate is still rising  10. Job Search: Workers who spend time looking for  employment  a. Frictional Unemployment: Unemployment due to the time workers spend in job search  i. A certain amount of frictional unemployment is  inevitable due to the constant process of economic change  ii. The economy is more productive if workers take  the time to find jobs that are well matched to their skills iii. When there is a low unemployment rate, periods  of unemployment tend to be quite short, suggesting that much of the unemployment is  frictional  iv. In periods of higher unemployment, workers tend  to be jobless for longer periods of time, suggesting that a smaller share of unemployment is frictional  b. Structural Unemployment: Unemployment that  results when there are more people seeking jobs in  particular labor markets than there are jobs available at the current wage rate, even when the economy is at  the peak of the business cycle  Minimum Wage – each person should get an honest  hours worth of work  Labor Unions – Creating unemployment? Labor unions  are not good if you’re not working because they have  bargaining power (an organized association of workers,  often in a trade or profession, formed to protect and  further their rights and interests  Efficiency Wages – Wages that employers set above the equilibrium rate as an incentive for better employee  performance  *** Frictional and Structural employment are considered long term unemployment  Frictional & Structural unemployment are always present; they  are NATURAL c. Short Run Unemployment – Cyclical: When workers  lose their jobs during downturns in the business cycle.  Cyclical unemployment results from a large drop-off in  demand. When consumer demand for goods and  services drops, business revenues decline, and  eventually companies have to lay off workers to  maintain profit margins.  For example… 100 people are in the labor force  1 person was unemployed for 12 months  12 others were unemployed for 1 non-overlapping month each  What is the unemployment rate?GDP % = (2/100) x 100 = 2%  because 1 person contributed 50% to the unemployment rate and the others produced the other 50%. The one person that was  unemployed for 12 months contributes more to unemployment. Actual  Unemployment Natural 5% unemployme nt Cyclical  Unemployment 11. Nominal vs. Real Wages  a. Nominal: Rate of pay employees are compensated  ($15/hr)  b. Real: Wages adjusted for inflation or wages in terms of  the amount of goods and services that can be bought  12. Okun’s Law: change in GDP % = 3% - 2(change in  unemployment %)  3%1.5% Because 3% - 2(1.5) = 0% 13. Phillips Curve (unemployment % & inflation %)  a. If inflation is high, then unemployment is low (and vice  versa)  Inflation %Unemployment  %14. Costs of Inflation: (a general increase in prices  and fall in the purchasing value of money) a. Shoe Leather Costs: The increased costs of  transactions caused by inflation  i. Since cash loses its value quickly during high  inflation, people waste more time running around  to spend it as fast as they can  b. Menu Costs: The real cost of changing a listed price  c. Unit of Account Costs (inconveniences): Costs  arising from the way inflation makes money a less  reliable unit of measurement  i. Calculations are hard when inflation is high  Expected inflation is not bad!  Unexpected inflation is a big problem!  Inflation rate = ((price level yr 2 – price level yr 1)/price  level yr 1) x 100  15. Interest Rate: the proportion of a loan that is charged as interest to the borrower, typically expressed as a  percentage of the loan outstanding a. Real interest: the rate of interest an investor, saver,  or lender receives after allowing for inflation  b. Nominal interest: the interest rate before taking  inflation into account  __________________________________________________________________ _ Chapter 9: Economic Growth and Development 1. Facts a. World income distribution is very unequal, but this is a  recent phenomenon  2. The rule of 70: the magic of compounding  a. Even small differences in growth rate get magnified  over time  b. Doubling time = (70 / percent growth rate)  i. Example: If real GDP per capita is growing at an  annual growth rate of 3.5%, it will double in:  = 70/3.5 = 20 YEARS c. The moral? Small improvements in growth add up fast  (the power of compounding)  3. Sources of Economic Growth  a. Factor accumulation  i. Capital  ii. Human capital (health, education, experience)  iii. Technology  iv. Rule of law, “institutions”  *** technology and rule of law are unobservable  that combine to determine total productivity 4. Aggregate Production Function  Y = T x F (K,H,L,N)  T = total factor productivity  ∙ Technology  ∙ Rule of law  ∙ Institutions  ∙ Property rights  ∙ Social contracts  K = physical capital  ∙ In order to have more capital, you need to invest  ∙ Encourage investment ∙ Investing in a poorer country gives you more return  H = human capital  ∙ Health, experience, and education  L = labor force  N = natural resources  *** all of your inputs are compliments and that is why you  multiply (when you add, they are substitutes)  Y = T (2K + 3H + 5L) inputs are perfect substitutes Y = T (K)^0.3 (H)^0.4(L)^0.4 inputs are perfect compliments  5. In per capita terms:  (Y/L) = T ((K)^0.3(H)^0.4(L)0.4) //// L) divide everything  by labor force  6. Sources of economic growth  a. Factor accumulation (more k & h)  b. Technological change (grow your technology) 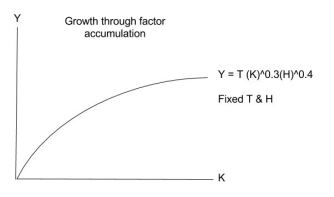 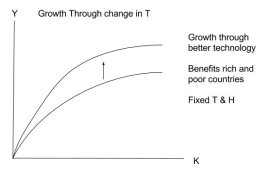 Chapter 10: Savings, Investment, and the Financial  System 1. Refreshing our National Income Account Knowledge… a. Closed Economy (no trade, self sufficient)  GDP = C + I + G  Total Income = Total Spending  Now, what can be done with income? It can either be  spent on consumption – consumer spending (C) plus  government spending (G) – or saved (S).  SO, it must be true that… GDP = C + G + S  Total spending consists of either consumption spending  (C+G) or investment spending (I) GPD = C + G + I  Total income = consumption spending + investment  spending  Putting the equations together, we get: C + G + S = C + G + I  Consumption spending + savings = consumption  spending + investment spending  Subtract consumption spending (C+G) from both sides  and we get:  S = I Savings = Investment spending  Budget Surplus: The difference between tax revenue and  government spending when tax revenue exceeds government  spending (positive contribution to national savings)  Budget Deficit: The difference between tax revenue and  government spending when government spending exceeds tax  revenue (negative contribution to national savings) Budget Balance: The difference between tax revenue and  government spending. A positive budget balance is referred  to as a budget surplus; a negative budget balance is  referred to as a budget deficit  National Savings: The sum of private savings and the  government’s budget balance; the total amount of savings  generated within the economy  Total income = Consumption spending + savings  b. Open Economy  NCI = IM – X  Net capital inflow = Imports – Exports  Rearranging the equation, we get:  I = Y – C – G + NX  Using both of the equations, we know that GDP – C – G  is equal to National Savings that:   (I – S) + NX = 0  Investment spending is equal to savings, where savings is equal to national savings plus net capital inflow  Net Capital Inflow: The total inflow of funds into a country  minus the total outflow of funds out of a country  2. The Market for Loanable Funds A hypothetical market that brings together those who want  to lend money (savers) and those who want to borrow (firms  with investment spending projects)  We assume that the price of loans is the nominal  interest rate  a. The Demand for Loanable Funds i. The demand curve for loanable funds slopes  downward: the lower the interest rate, the greater  the quantity of loanable funds demanded. Here.  Reducing the interest rate from 12% to 4%  increases the quantity of loanable funds  demanded from $150 billion to $450 billion. 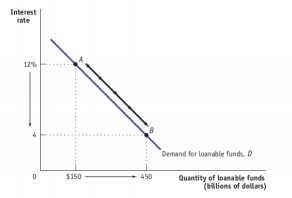 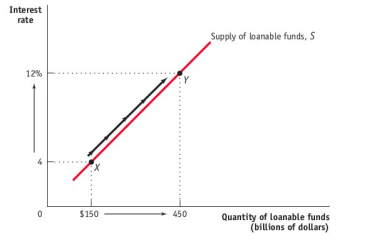 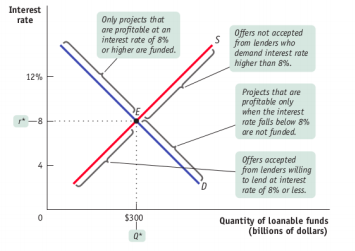 4. Shifts of the Demand for Loanable Funds  a. Changes in perceived business opportunities  b. Changes in government borrowing 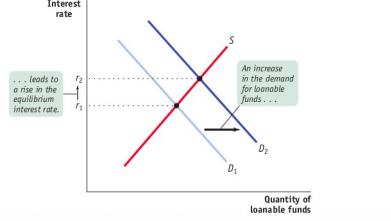 Crowding Out: The negative effect of budget deficits on private  investment, which occurs because government borrowing drives  up interest rates  5. Shifts of the Supply of Loanable Funds  a. Changes in private savings behavior b. Changes in net capital inflows 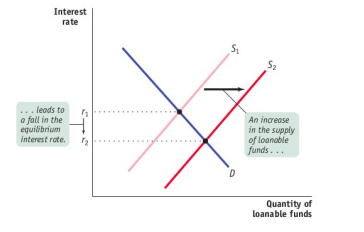 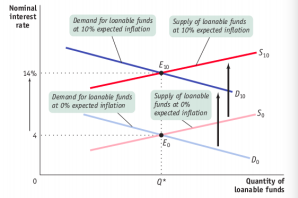 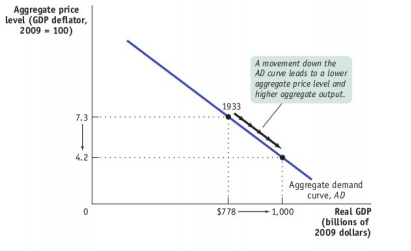 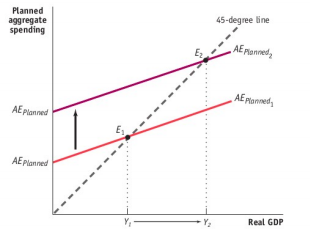 12 others were unemployed for 1 non-overlapping month each What is the unemployment rate?

Don't forget about the age old question of Identify the critical components of economis.

Now, what can be done with income? 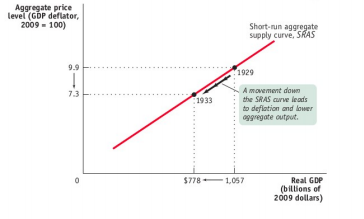 Changes in Commodity Prices: An increase in the price of a  commodity (oil) raised production costs across the economy and  reduced the quantity of aggregate output supplied at any given  aggregate price level, shifting the curve to the left and vice versa  Changes in Nominal Wages: A rise in nominal wages increases  production costs and shifts the short-run aggregate supply curve  to the left  Changes in Productivity: An increase in productivity means  that a worker can product more units of output with the same  quantity of inputs. So a rise in productivity increases producers’  profits and shifts the short-run aggregate supply curve to the right The Long-Run Aggregate Supply Curve  In the long run, nominal wages are flexible, not sticky  A graphical representation that shows the relationship between  the aggregate price level and the quantity of aggregate output  supplied that would exist if all prices, including nominal wages,  were fully flexible. The long-run aggregate supply curve is vertical because the aggregate price level has no effect on aggregate  output in the long run – in the long run, aggregate output is determined by the economy’s potential output 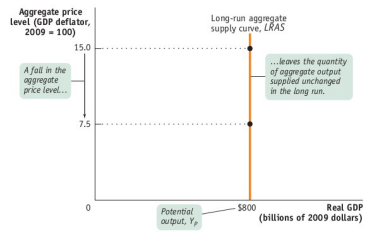 Potential Output: The level of real GDP the economy would  produce if all prices, including nominal wages, were fully flexible  This is where the LRAS touches the horizontal axis We generally think of the long-run aggregate supply curve as  shifting to the right over time as an economy experiences long run growth  From the Short Run to the Long Run

What are the most common form of business structure?