rerunning a program with the same data produces

rerunning a program with the same data produces

Description: These are study guides for the first two sections of the exam which is based on html, javascript, history of computers and technology, and basic tech knowledge

∙ A machine instruction uses how many bytes of memory?

∙ What must be the step size of the loop below, to ensure that it repeats exactly 5 times?

∙ How many interactions will occur in this loop?

Buttons must be within the form tags To make buttons larger, add spaces before and after the name ­ &nbsp is the symbol we use, stands for nonbreaking space

<input type=“button" value=“Convert"> onclick= “event_handler” </form>The event handle refers to the code that will be executed when the button is clicked        Chapter 19  Input Elements: An HTML form can contain input elements: ∙ text fields ∙ checkboxes ∙ radio­buttons ∙ submit buttons and more ∙ Can also contain other elements:∙ select lists, textarea, … JavaScript rules for: functions, declarations, return values, function calls, scope of  reference, and local/global variable reference, Forms and Functions  Functions: ∙ If we have a lot of code, onclick can get unmanageable ∙ Functions help us by putting the code in one place ∙ Just call the function when we need it Anatomy of a Function: 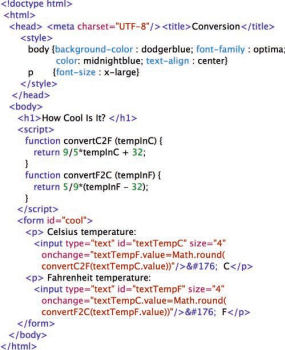 1. _______ are variables in a function that do not need to be declared with a var statement. Parameters  2. The two major benefits of using functions are _______ and _______. Reuse and simplification  (complexity control) 3. From the perspective of the function body, input values for a function are called _______. Arguments 4. JavaScript uses _______ dates. UNIX 5. A random number generated in JavaScript is always between _______ and _______. 0 and 1 6. There is a strong tradition in coding to _______ code. Share 7. A _______ is a request to the computer to execute the statements inside the function. Call 8. The minimum number of parameters when writing a function is _______. Zero               Chapter 20  Iteration Principles:  ∙ Repeat o 5 repeats, means you may have done it once followed by 5 more times  ∙ Iterate o 5 iterations means that you do it 5 more times ∙ Iteration means looping through a series of statements to repeat them  ∙ In JavaScript, the main iteration statements is the for loop  JavaScript Rules for ‘for Loops’.  The parts of the for loop including what is allowed and not allowed in each part for ( <initialization>; <continuation>; <next iteration> ) {<statement list>}  Loop Syntax:  for ( <initialization>; <continuation>; <next iteration> )  { <statement list> Performed the right number of times  } ∙ The whole statement sequence is performed for each iteration ∙ Control Specification o Initialization, continuation, next iteration o Controls the number of times the loop iterates  for (j=1; j < = 3; j=j + 1) { <statement list> } ∙ Use an iteration variable  ∙ Iteration variables are normal variables and must be declared ∙ This example uses j as the iteration variable  For ( var j=0; j<n; j++) {<statement list> } Example: Produce an Alert box

is a constructive response to another's self-disclosure