UH / Kinesiology / KIN 1304 / a family health tree is also called a genogram or a genetic pedigree.

a family health tree is also called a genogram or a genetic pedigree.

a family health tree is also called a genogram or a genetic pedigree. 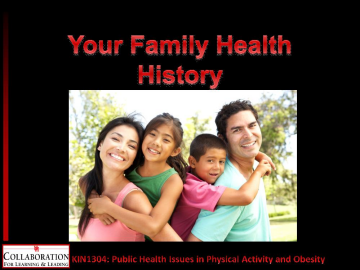 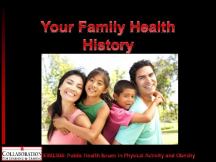 Notes: In this lecture we will discuss the genetic,  physiological, and behavioral components of  your family health history. As we review the  various components, please pause periodically  and think about how you can apply these  concepts to your own life. Slide 2 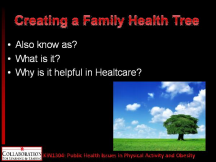 Notes: A family health tree, also called a genogram or  genetic pedigree, is a visual representation of  your family’s genetic history. Creating a family  health tree can help you identify patterns of  health and illness within your family, in order to  pinpoint areas of special concern or risk for you. Slide 3 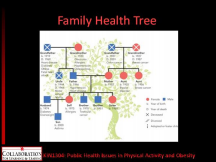 Notes: This diagram is an example of a complete family  health tree. It is particularly important to note the  birth day and death of each family member. Of  equal importance is the cause of death, which  may provide insight into potential family health  issues or risks. Other information that is helpful  is: when a family member was diagnosed with  particular disease, disaboilities, operations,  reproductive problems, mental health issues, and  any other health details available to you.

What can you learn from your family health tree?

Don't forget about the age old question of • Where do we stand now?

What can you learn from your family  health tree? Duration: 00:01:04 Advance mode: Auto 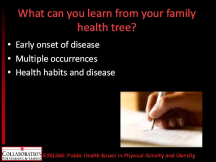 Notes: Identifying certain patterns on your family health  tree may suggest a genetic link. For example,  early onset of a disease often means that  disease is genetic or has a genetic component.  Also, the occurrence of a disease in multiple  family members on the one side of your family  also suggests a genetic association. A family  member with multiple cancers or a family  member who lives a healthy lifestyle and still  develops a disease are other indicators that the  cancer or disease is genetic. On the other hand,  lung cancer that develops in a relative who has  smoked for 40 years may not be genetically  linked. While this is not something to stress  about, understanding your family’s health history  can help you be proactive in living a healthy  lifestyle. If you are aware of several close  female relatives that have had breast cancer,  you will be more likely to schedule regular exams  or mammograms with a doctor.

So, what color are your eyes if you have both the brown and blue eye version of the eye color gene?

If you want to learn more check out afi cfa

You and Your Genes: The Basics of  Heredity Duration: 00:01:18 Advance mode: Auto 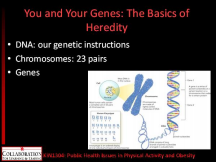 Notes: This diagram demonstrates the components of a  chromosome, gene, and DNA. The nucleus of  every human cell contains an entire set of  genetic instructions stored in our DNA  (deoxyribonucleic acid) that is passed from one  generation to the next. DNA has four building  blocks (nucleotide bases; A,T,C,G) that can be  arranged to form a distinct message (gene) that  acts as the body's instruction booklet. DNA is  divided into 23 pairs of chromosomes (one set of  each pair comes from each parent) = 46 total.  Abnormalities within these 23 chromosomes  have adversely affect your health. Luckily many  such abnormalities can be detect prior to or at  birth; however, some of these go undetected.  The individual chromosomes can be broken  down into separate genes. A gene is a series of  paired nucleotides at a certain location on a  chromosome that codes for a certain protein.  Proteins are the body's fundamental building  blocks and disturbances in proteins can be the  cause of many health-related problems. Slide 6 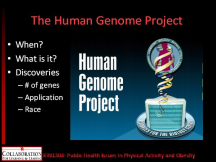 Notes: The human genome project was launched in  1990. It was an international collaboration  between 20 research groups in 6 different  countries. In April 2003, it was announced that  the sequencing of the human genome was  complete; discoveries included: • Humans have only 20,000 to 25,000 genes  (same as a mouse) • That there are many potential applications in  medicine and pharmaceuticals • Race has more to do with social and cultural  interactions and has no biological basis The data scientists gathered from the human  genome project has been paramount in the  progress researchers have made in the area of  genetics and genetic disorders.

Why not judge "human stock" to select the most eugenically fit family? 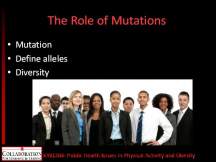 Notes: In order to understand the role of genes in your  family health tree, it is important to discuss terms  typically applied to genetic measurements. A  change in a gene is called a mutation.  Remember that genes are chains of nucleotide  basis in a specific order. A mutation occurs  when one or more of those bases changes and  the order of the chain is disrupted. The location  of the mutation determines the effect. Some  mutations are harmful, other mutations can be  beneficial, and some have no effect.  Alternate forms of the same gene are called  alleles. You will share some common alleles with  the members of your family health tree; however,  individuals who are not from your family health  tree may have different alleles that you.  Mutations allow for the great diversity that we  see within the human race, and while they may  cause disease, they also make us uniquely  different than each other.

Don't forget about the age old question of unc lfit

Published by Articulate® Presenter www.articulate.com Slide 8  Genetic Inheritance Duration: 00:01:09 Advance mode: Auto Notes: Alternate forms of genes, called alleles, account  for our genetic inheritance that we receive from  our biological parents listed in the family health  tree. It is your genetic inheritance that accounts  for the many physical traits that you have. For  example eye color is an inherited trait. Alleles  can be dominant or recessive. Remember that  for most genes, you have two copies of each  gene that you inherited from your mother and  your father. Each copy of the gene could be  different. For example one copy may give you  blue eyes while another may give you brown. So,  what color are your eyes if you have both the  brown and blue eye version of the eye color  gene? Brown. This is where the idea of dominant  and recessive comes in. Dominant means that  one of the versions trumps the other. In our  example here, brown is dominant over blue so  you end up with brown eyes. Most characteristics  (such as height or skin color) are determined by  the interaction of multiple genes at multiple sites  of different chromosomes. Slide 9  Single-Gene Disorders Duration: 00:01:25 Advance mode: Auto Notes: Some diseases are caused by the alteration  (mutation) of a single gene. Before we discuss  these disease, we will define the term autosome.  An autosome is a chromosome that does not  determine gender. If you remember back to the  previous slide, we all have 23 chromosome  pairs. 22 of those pairs are identical between  men and women. The 23rdpair is our XX or XY  chromosomes that determine our biological  gender. Genetic diseases or disordered that  result from a mutaiton on an autosome are called  autosomal disorders.  • Autosomal dominant disorder: Mutated  gene is on a dominant autosome; hypertrophic  cardiomyopathy (common cause of sudden  death in young athletes)

We also discuss several other topics like math 205 lehigh

Published by Articulate® Presenter www.articulate.com • Autosomal recessive disorder: Two  copies of a mutated gene on an autosome;  Cystic Fibrosis Sex-linked disorder: Mutated gene is on the  chromosome that determines gender. Examples of these would include hemophilia and Fragile X  Syndrome, which are both associated with a  mutation on the X chromosome. Slide 10  Multifactorial Disorders Duration: 00:01:52 Advance mode: Auto Notes: The determination of disease risk is not as  simple as simply testing a person for a genetic  mutation or specific type of allele. The onset of  most diseases is associated with an interaction  between genetics and environmental factors.  You may have also heard this referred as the  "nature vs. nurture" argument. Many diseases  and traits can result from interactions between  genes and the external environment. For  example it has been established that individuals  who live to be a 100 years old have a specific  allele type; however, living to be 100 years old  will only happen if you are careful in the lifestyle  choices that you make. For instance if you had  the allele to live to be 100 years old, but you  smoked your whole life, it is likely that you would  not live to see 100 years old. The reality is that  while most diseases have at least some genetic  origin, the vast majority of diseases that afflict  people in the world today are multifactorial in  origin. One of the biggest challenge in the US  today is the negative health consequences  associated with being overweight or obese. It  has been estimated that less than 2% of obese  individuals actually have an allele type that  causes obesity. Thus 98% of obese individuals  are in that situation because of lifestyle choices

If you want to learn more check out Question: How fast then does this spring back?

catal huyuk existed how many years ago