27) How do muscle fibers shorten during contraction?

14) At a chemical synapse, what causes the ion channels on the receiving cell's membrane to open?

11) Why are action potentials usually conducted in one direction? 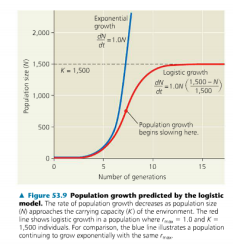 10 53. (20 points total) Community Ecology a. (10 points) Explain how interspecific competition, predation, and mutualism differ (you need to write  about all three below) in their effects on the interacting populations of two species. Interspecific competition has negative effects on both species (-/-). In predation, the predator  population benefits at the expense of the prey population (+/-). Mutualism is a symbiosis in which both  species benefit (+/+). b. (10 points) According to the principle for competitive exclusion, what outcome is expected when  two species with identical niches compete for a resource? Why? One of the competing species will become locally extinct because of the greater reproductive success  of the more efficient competitor11

tangshan industries has issued a bond which has a​ $1,000 par value and a 15 percent annual coupon interest rate. the bond will mature in ten years and currently sells for​ $1,250. using this​ information, the yield to maturity on the tangshan industries
Terms of Use Cancellation Policy Privacy Policy
StudySoup Inc, 2021.