to apply parsimony to constructing a phylogenetic tree, _____.

to apply parsimony to constructing a phylogenetic tree, _____.

What was the basis for dividing prokaryotes into two domains?

5) What is thought to be the correct sequence of these events, from earliest to most recent, in the evolution of life on Earth?

a. (10 points) Using cladistics, build a phylogenetic tree for the five taxa (A to E) in the table above. Also, indicate the following in your tree: • outgroup(s) • shared ancestral character(s) • shared derived trait(s) The tree should look like the one below where O the outgroup is E, Eyes (1) is the shared ancestral  character, and wings (3), legs (4), and ears (2) are all shared derived traits 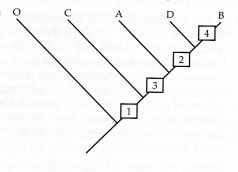 b. (5 points) How are fossils used to identify ancestral and derived traits of organisms? Fossils are the only way we can see what extinct ancestor organisms looked like. If the fossils have a  trait that it is most likely ancestral because it has been around for a while whereas if the fossils do not  have a trait then it is most likely a new adaptation for only a certain group of species making it a  derived trait.10 52. (18 points total) Origin of Eukaryotes and Protists a. (6 points) Why was the evolution of a flexible plasma membrane that can fold inward and form  vesicles a key event in eukaryotic cell origin? A flexible plasma membrane allowed folded inward and elaborated internal organelles like the  nucleus and endomembrane system. Lastly, bits of the membrane can engulf large chunks of  material from the environment that gave rise to endocytosis as a new more efficient mode of feeding. Endocytosis of whole bacteria cells lead to the acquisition of the mitochondria and chloroplast.  The three protist supergroups Chromalveolata (includes the diatoms), Excavata (includes the  euglenids), and the Archaeplastida (includes the green algae) all include organisms that are  unicellular, eukaryotic, and photosynthetic. b. (6 points) Describe what modern evidence was used to create the three separate protist  supergroups above when it is clear that the organisms in the supergroups share several traits like  photosynthesis. Molecular systematics has been used to create the supergroups of protists. It is not easily possible to  group them correctly using morphological characteristics below but comparisons of genes between  the different species is a much more sensitive and reliable way of clarifying the phylogeny of the  protists. Phylogenetic analysis has clearly and consistently shown that many of the groups that fall  under the rubric “protists” are in fact not closely related to one another, but are paraphyletic. c. (6 points) All of the evidence we have so far indicates that there was only one endosymbiosis event  that created the chloroplast in the ancestor of the Archeaplastida supergroup. Given this, how do  modern biologists explain the origin of the chloroplasts in other supergroups such as Chromalveolata and Excavata? Explain. Primary endosymbiosis in the Archeaplastida supergroup gave rise to the original choloroplast when  a larger eukaryotic cell engulfed a smaller cyanobacterium capable of performing photosynthesis.  Primary endosymbiosis gave rise to the green algae and red algae lineages. Secondary  endosymbiosis occurred when a green or red algae was engulfed by a different type of eukaryote like  several of the organisms in the Chromalveolata and Excavata supergroups. This second eukaryote  retained the chloroplast of the original algae but eventually lost the rest of the cellular constituents.11 54. (12 points) Seed Plants a. (6 points) Explain the importance of pollen in freeing seed plants from dependence on liquid water. Pollen travels through the air or can be carried by animals from one plant to another. Pollen is the  male gametophyte of seed plants that carries the sperm to the female recipient plant for fertilization to  occur. In older seedless plant lineages the male gametophyte created motile sperm that traveled to  the egg on their own using flagella for locomotion. These flagellated sperm required water to get from  on plant to another which restricted the dispersal of the genetic material between populations of the  same species. The flagellated sperm are also much more sensitive to environmental stress because  they are less protected than pollen grains. b. (6 points) Explain the difference between pollination and fertilization. Pollination is the arrival of the pollen grain (male gametophyte) on the appropriate landing point close  to the female gametophyte on the sporophyte of the same species. A pollen grain that reaches this  point develops further. It produces a slender pollen tube that elongates and digests its way toward the  female gametophyte. When the tip of the pollen tube reaches the female gametophyte the sperm are  released from the pollen tube and fertilization can occur.12
Page Expired