the following statements refer to events occurring during mitosis

the following statements refer to events occurring during mitosis

9 Pages 199 Views 0 Unlocks
Reviews
2013 B1 Name __KEY_____________________________________ If you were approved to take the exam with a different section than  you are enrolled in, or are a UCI extension student, check here:  BIO SCI 97, GENETICS, FALL 2013 FINAL EXAMINATION DO NOT OPEN EXAM UNTIL TOLD TO DO SO PHONES OFF, BAGS UP FRONT BEFORE BEGINNING: 1. Write your name in the upper right corner of this page (and check the box if you’re an extension  student) 2. Write your name and ID number on your Scantron card, and bubble in the code box for your ID. Also,  if you’re an extension student, put an “X” in front of your written ID number, e.g X0698337 3. Bubble in your exam version number (see top right of this page, B1=A, B2=B, B3=C) on the Scantron  4. Read the rules below and sign the pledge. Academic dishonesty (cheating) will not be tolerated in any form.  The following are the EXAM RULES: 1) You must sit in your assigned seat with your ID on the desk and face up (unless given permission  or moved by a professor) 2) The ONLY items allowed on your desk in addition to the exam are: student ID (removed from  any covers/cases), pencil, and an eraser. THIS IS A CLOSED BOOK TEST, NO NOTES ARE  ALLOWED. 3) You may not leave your seat (unless directed by a proctor) except to turn in your exam. 4) Your exam must be completed by you alone—keep your eyes on your own paper. No discussion  with other students. Shield your own answers from other students. 5) Other rules may be announced during the exam and must be followed. 6) You must sign this page to indicate that you understand these rules. IF YOU DO NOT SIGN  BELOW, WE WILL NOT GRADE YOUR EXAM. FAILURE TO FOLLOW ANY OF THESE RULES MAY RESULT IN AN “F” FOR THE EXAM OR CLASS.  I UNDERSTAND THESE RULES AND AGREE TO FOLLOW THEM:  ________________________________________________ (sign your name here) NOTES for all questions: • Affected = has the disease. Unaffected = does not have the disease (but may be a carrier if the  disease is recessive). Normal = does not have the disease and is not a carrier. • For all questions, assume any trait or disease mentioned has 100% penetrance, unless it is  stated otherwise. For inheritance questions, assume no new mutations, unless it is stated  otherwise. • All diseases mentioned are genetic diseases, unless it is stated otherwise. • Pedigrees will only show you if someone is affected (black symbol) or unaffected (white symbol).  If someone is a heterozygous carrier of a recessive disease, they will be depicted as unaffected.B1-Page 2 MULTIPLE CHOICE – ANSWER ON YOUR SCANTRON CARD Each question is worth one point. 1 Consider the following 4 Statements about the events of meiosis and mitosis and then pick the  one Answer that most accurately and most completely describes the these events. Statements: 1. Disjunction of sister chromatids occurs in mitosis 2. Disjunction of sister chromatids occurs in meiosis 3. Disjunction of homologous chromosomes occurs in mitosis 4. Disjunction of homologous chromosomes occurs in meiosis Answer: A. 1 and 3 are TRUE B. 2 and 4 are TRUE C. 1, 2 and 4 are TRUE D. 1, 2, and 3 are TRUE E. 1, 2, 3 and 4 are TRUE 2 Which of the following statements (A-D) is TRUE? A. In any given population, most people will express the dominant phenotype B. A dominant allele will eventually become fixed in the population C. An individual must be homozygous in order to express a dominant phenotype  D. An individual must be homozygous in order to express a recessive phenotype  E. More than one of the above statements (A-D) is true. 3 In humans, both freckling (that is, having freckles) and dimpling (that is, having dimples) are  autosomal dominant traits. If a woman with freckles and dimples (Felicia) mates with a non dimpled, non-freckled man (David), what can we say with certainty about their kids? A. All of their kids will be both freckled and dimpled B. We would expect some of their kids to be dimpled and some not to be C. None of their kids will be both freckled and dimpled D. Whether or not the kids are freckled or dimpled will depend upon the sex of the kids E. None of the above (A-D) can be said with certainty 4 Which of the following statements are FALSE? A. The forced sterilization of individuals judged to be genetically “inferior” has never been  practiced in the United States B. Pre-implantation genetic diagnosis is a technique that can be used by couples to choose  the sex of their child-to-be. C. By saving the lives of patients with recessive genetic diseases who would have otherwise  died, modern medical science is significantly reducing the fitness of the human gene pool D. More than one of the above statements are false E. None of the above the statements are false 5 Which of the following statements about forensic DNA typing is FALSE? A. DNA typing is generally very reliable, provided enough sample material is available B. The preferred method involves the analysis of four independent loci that are  polymorphic due to short tandem repeats C. Over a dozen people have been freed from death row after DNA evidence proved they  were innocent D. Mixed samples (more than one person’s DNA in the sample) are frequent and can be hard  to interpret E. None of the above statements are false

If a woman with freckles and dimples (Felicia) mates with a non dimpled, non-freckled man (David), what can we say with certainty about their kids?

Don't forget about the age old question of uci scantron

What could have caused this?

After meiosis II occurs normally, what are the total numbers of chromosomes in the four resulting gametes?

If you want to learn more check out How many centimorgans separate two independently-assorting loci?

Don't forget about the age old question of two pure-breeding mutant plants produce white flowers. when they are crossed, all of the progeny have wild-type purple flowers. what does this genetic complementation tell you?

Don't forget about the age old question of oct 23, 2015 uploaded

We also discuss several other topics like the ancient greeks saw the human form even in their temple styles. 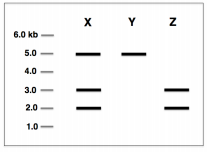 the keystone of the revolt against the church of rome was the dazzling realization that people could live in a direct relation to god with no necessity for an intermediary.

the motivation behind externalism is:

shelby, a 13-year-old girl, is brought in by her mother. the mother is concerned about shelby's "unusual" bedtime routine. before going to bed each night, shelby spends exactly one hour writing all the events of her day in minute detail in a special journ
Terms of Use Cancellation Policy Privacy Policy
StudySoup Inc, 2021.