UH / Business / INTB 3355 / What are the types of economic integration agreements?

Description: These notes are what is on the midterm exam for INTB 3355. Blue writing is what was said in class on the day of the review or a clicker question. Red is a test question.

I. International Institutions from a Business Perspective Economic Integration Agreements

& a) Free trade area (FTA) – tariffs abolished among members, but each  member nation maintains its own external tariffs, those to countries in the rest of the world.

o Members have free trade among themselves but have their own  trade restrictions with nonmember nations. If you want to learn more check out What are the two reasons why meta analysis are better than primary studies?

o Within FTA, restrictions remain on: the movement of services  (accounting, insurance, legal services), people (labor), and capital.  o Economic cooperation begins with an agreement to have a free  trade area.

How does culture affect business functions?

& No tariffs imposed on nations that are members of agreement, but each  individual nation in the agreement has the ability to tariff other countries & b) Customs union – an agreement/collaboration that adds common  external tariffs to the FTA.  If you want to learn more check out What are issues that developmentalists argue?

o FTA adds common external tariffs to become a customs union –  clicker  Don't forget about the age old question of Temperature increased because of what?

& c) Common Market – created when a customs union lifts restrictions on  the mobility of services, people, and capital among the member nations o Essentially a single market so barriers to trade (such as standards,  borders, taxes) become common

What causes limitations on human energy and mental powers?

o To achieve this level of economic integration, common market  members establish common economic policies, which require a  great deal of political will.

o Involves a high degree of political integration, which requires  member nations to surrender important elements of their

 A central bureaucracy is responsible for coordinating tax

rates, labor, education, social and legal systems for all EU

nations’ currencies. Is used in 16 of the member states.

2. NAFTA (North American Free Trade Agreement) – created a free trade  area among Canada, Mexico & the US (short answer: name & discuss  positive/negative consequences of NAFTA – actual test question was to  discuss 1 pos/neg consequence of NAFTA on Mexico) If you want to learn more check out What is the french wars of religion?

a Main goals – promoting economic growth by easing the movement of  goods and services between US, Mexico & Canada. If you want to learn more check out What is the conclusion in the prisoners dilemma?
We also discuss several other topics like What if the target market is unfamiliar with the product category?

o Removal of most tariffs and restrictions on trade between the US,  Canada & Mexico.

o Intra- North American Trade has more than tripled since

o Reduction in manufacturing jobs in the US – Direct losses vs.  changing pattern of employment – short answer

o Mexico affected by 2001 US recession

∙ In EU, there is more institutionalization, which is different from  other regional organizations (NAFTA) that only focus on economic  matters.

c) Council of the European Union – represents the member states and is  the primary policy-setting institution of the EU. Legislative

∙ When the council meets, the minister who represents the specific  area being discussed serves as the representative of the member nation.

∙ Decides cases arising under the Treaty of Rome and subsequent  agreements.

∙ On EU matters, its authority supersedes that of the member nations’ national courts.

g) The European Union’s impact on international business ∙ Significant # of EU regulations have major impact in the US, Japan,  China & elsewhere, because of the EU’s size and importance as a  trading partner.

∙ EU standards tend to be advanced, especially in ecology and  sustainability requirements.

∙ EU is the world’s largest trading economy, a large source of FDI  outflows, & the source for 26% of the world’s total output.

1. What is culture – Consists of the individual worldviews, social rules, and  interpersonal dynamics characterizing a group of people set in a particular  time and place. – clicker

∙ Culture is learned; we are not born with culture.

∙ Aspects of culture are interrelated.

Ethnocentricity – The belief that your culture is superior to other cultures 2. How does culture affect business functions – culture affects all business  functions: marketing, HR, production, accounting & finance, and leadership –  Test question (just had to what business functions culture affected) ∙ Marketing: what motivates people to buy and what do they prefer to buy?  o To develop effective marketing campaigns, the marketer has to  understand the foreign market the firm is selling to

∙ Human Resources: What are the local Sociocultural motivators of  employees?

o Rewards: In some cultures, individual effort is rewarded, while in  others, group effort is more highly valued

o Attitude towards status (social status): It is earned through  achievements, or result of family’s social position

∙ Production: How do people work in groups? How do you groups acquire  resources?

o Production managers have found that attitudes toward change can  seriously influence the acceptance of new production methods o The assembly line is the product of minds socialized in a culture, in  which the task receives primary focus

∙ Accounting & Finance: Controls are based on the perception of trust in  people

∙ Preferred Leadership Styles: Relationship between leader and followers o Leadership function: does leadership integrate a group of people or  is it to provide direction for a collection of individuals?

- Task centered. Decisions/activities focus around what needs to be  done, division of responsibilities. 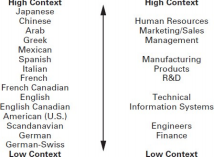 Universalism vs. Particularism / rules vs. relationships

- Universalist – rules apply to everyone (rule based)

- Particularist – context determines which rules apply to whom  (relationship based) – Ex: China

Neutral vs. Affective / unemotional vs. emotional

- Display of emotion in a culture

Specific vs. Diffuse – describes displace of emotion in a culture

- Private life: small in specific vs. large in diffuse – undifferentiated from  public life

- Status based on what a person does vs. who a person is

- Achievement – reward what you do

- Ascription – consider who a person is by family lineage, age, other  attributes – Ex: China

- Focus on past, present or future

- In harmony with nature or in control of nature?

1. Porter’s Diamond – A model that considers 4 aspects of a country’s  economic environment that affect its competitive position. – test question

o Basic factors – those that a country inherits (Ex: mountains and  natural resources) 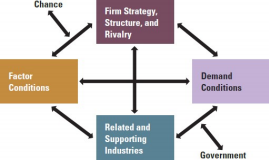 2. Location – builds political and trade relationship – where a country is  located, who its neighbors are, how its capital & major cities are situated ∙ Geographic Proximity – major reason for trade between nations & plays a role in the formation of trading groups

∙ An effect of topography on a country is it creates different language  groups which require special marketing adjustments.

o Ex: In Spain, Catalonia and the Basque country have separate  languages.

 Although the Basques & Catalans can speak Spanish,

when they are among themselves they use their own

languages (Catalan & Euskara), which are unintelligible to

∙ Surface features, such as mountain ranges, divide the country into  smaller regions with separate markets, each with its own culture and  dialect.

4. Climate – climate conditions explain differences in human and economic  development – meteorological conditions including temperature,  precipitation, and wind that prevail in a region.

∙ Climate sets the limits on what people can do, physically and  economically.

What is the goal of journalism?

What caused the fall of tenochtitlan?