School: University of Alabama at Birmingham

Description: These notes cover Gene Regulation. Topics from these notes will be on Exam 2.

○ Cells don’t express all genes all of the time. Expression varies:

What refers to specialized proteins that stimulate gene transcription?

■ Regulator (protein such as a transcription factor, TF); examples: ● Dimers

■ Operator (DNA sequence) We also discuss several other topics like What are some of the signicant arts in the 15th century?

How can gene expression be induced?

● Affect only genes on the same chromosome

● Produce a protein that can affect gene expression on the

same chromosome or on other chromosomes in the cell (ex:

■ Constitutive: expressed all of the time

■ Inducible: normally off, turned on by the presence of an inducer  substance If you want to learn more check out What is the difference between natural selection and sexual selection?

■ Repressible: normally on, turned off by the presence of a repressor  substance

● E. coli lac Operon If you want to learn more check out Do some photoautotrophs contain chloroplasts?

● In the absence of lactose, the regulator protein (a repressor)  binds to the operator and inhibits transcription

● No transcription in the absence of lactose because do not

want to waste energy and resources If you want to learn more check out What are some of the effects of entertainment shows?

● Mutations of the I gene are trans acting (since the repressor  protein can interact with other DNA molecules) We also discuss several other topics like How is ohm's law computed?

○ The regulator protein has a defective inducer­binding

stays bound to the operator and transcription is

○ The regulator protein has a defective operator­binding

○ No binding occurs so transcription is always

● Waste of energy/materials for the

○ The repressor protein will not bind to the operator

○ A mutation in the operator is cis­acting Don't forget about the age old question of Why is elasticity in demand always negative?

■ If glucose is present, lac genes are repressed EVEN IN THE  PRESENCE OF LACTOSE

○ When glucose is low, there is a lot of cAMP

● When the CAP­binding site is occupied,

■ Adversely, when glucose is high, there is little

cAMP (inhibition of the cAMP­producing

enzyme caused by glucose transport into the

● When the CAP­binding site is

○ In a repressible system, the repressor, by itself, will not bind to the  operator

○ If a corepressor is present, a repressor­corepressor complex will form ■ The complex binds to the operator and represses the operon ○ For the trp operon, the corepressor is tryptophan

● no tryptophan substrate to bind to the inactive regulator

protein/repressor so the repressor remains inactive and

cannot bind to the operator to stop transcription

● Transcription does not happen

protein/repressor so the repressor becomes active and binds

to the operator so no transcription

● Attenuation: additional level of control that affects the continuation of  transcription, rather than its initiation

○ RNA folds on itself

○ Genes are NOT organized into operons

■ Each structural gene has its own promoter and is transcribed  separately

the DNA and reposition the nucleosomes, allowing

transcription factors to bind to promoters

● Can bind to core and regulatory promoter regions

○ A typical eukaryotic gene, with its core promoter and

● May be located thousands of bp away

from the gene they control

● Regions of the DNA that interact with

transcription of nearby genes

● Can be located upstream, downstream

or even with the gene it regulates

between an enhancer and promoter or a

● Prevent a gene from being influenced by

the activation (or repression) of its

● CpG islands are often found near transcription start sites ○ About 2,000 bp in length and predominantly C and G

● Change the structure of DNA and alter the rate of

■ For a gene to be transcribed, transcription factors, activators and  RNA polymerase must bind to DNA

■ DNA wrapped around histones is not available for transcription ● Before transcription, chromatin structure changes locally to  make an open configuration for DNA accessibility

to histone proteins and destabilize the nucleosome

structure (makes DNA hydrophobic so the DNA is

loose and can undergo transcription)

■ Amount of mRNA depends on

○ Usually begins at the 5’ end with the removal of the 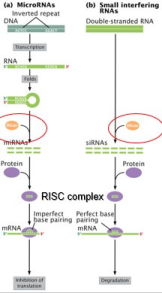 ■ 5’ UTR can have a AUG region that can trick the ribosome AUG ■ Possibly 1, 2, and 3 amino acids then it will terminate because of a  stop codon

○ P53 is a key suppressor

What kind of waves are p-waves?

What does a fish's gastrovascular cavity consist of?