Which nerves connect the central nervous system to the rest of the body?

This is essentially a list of questions that TAs have derived from the lectures based on  what they think are some of the main concepts. This is not a comprehensive list of what  may be on the test. Use this as a study tool to help you recognize areas you may not  understand. It is NOT a substitute for you own studying.

Much of the material on this test is going to cover information that requires a lot of  MEMORIZATION. Thus

What does doral root ganglion mean?

5. Dorsal: Toward the back If you want to learn more check out Why was the 1970s considered the worst decade of inflation?
Don't forget about the age old question of What are some species that are considered extinct?

6. Ventral: Toward the belly

7. Medial: Towards the middle If you want to learn more check out Is hypothesis a prediction?

8. Lateral: Towards the side

1. Ipsilateral: 2 locations on the same side of the body

2. Contralateral: 2 locations on opposite sides of the body

9. Proximal: Near from the centre or point of origin

10. Distal: Far from the centre or point of origin 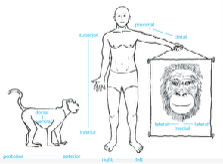 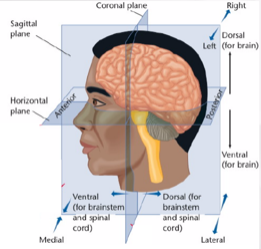 What is the function of cerebrospinal fluid?

Don't forget about the age old question of What is raymond dart's notion of human tool use?

2. Peripheral Nervous System (PNS): the nerves that connect the CNS to the rest of  the body

1. Chains of ganglia to left/right of SC central regions (thoracic and  lumbar)

2. Most post-ganglionic synapses use NE

1. Long pre-ganglionic axons from SC to ganglia (close to organ)  Don't forget about the age old question of Which holistic discipline studies all aspects of human behavior across time and space?

2. Afferent: brings information into the structure

3. Efferent: carries information away from the structure

If you want to learn more check out What is the aim of contractionary fiscal policy?

3. Grooves in the brain are called sulci (or fissures, which is deep sulci). The bumps are  called gyri.

4. What is the dorsal root ganglion?

2. A cluster of nerve cell bodies (a ganglion) in a dorsal root of a spinal nerve  3. Dorsal root ganglia contain the cell bodies of sensory neurones called afferent  neurones

5. What does the gray matter in the CNS contain? White matter? How are these two  matters changed from the Cortex to the spinal cord?

2. White matter contains nerve fibres, which are axons those are the extensions of  nerve cells, the neurones.

1. All acting in sympathy

7. What Cortex structures are involved in the limbic system?

3. Located on both sides of the thalamus

4. Cerebral cortex, but some of them are subcortical structures

8. What structures are involved in the basal ganglia? What kind of deficits would you see  if you damaged this system? What diseases specifically cause damage in this system?  1. Group of forebrain nuclei (not ganglia despite the name)deep within the cerebral hemispheres

- Via thalamus to cortex - Substantia nigra (in the midbrain)

9. What are the meninges?

1. An acute inflammation of the meninges (viral/bacterial infection)

10. What is purpose of the cerebrospinal fluid? Where is it formed?

1. Surrounds, cushions, and support for CNS

11. What are the two hemispheres of the brain connected by?

12. Describe how the cortex is organized. 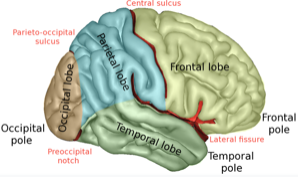 13. What deficits would you expect in a patient with damage to the occipital lobe.  1. Visual perception and functioning, a patient might have to thoroughly overhaul  many of his or her most basic coping and human relations strategies

14. Where is the primary somatosensory cortex and how is it organized? What kind of  information does it receive?

1. Located in the Parietal Lobe

2. It receives all sensory input from the body: skin, pain, visual, or auditory stimuli  3. Somatosensory centre:

1. Helps us understand what we see and feel

3. Proprioception: monitors information about eye, head, and body positions  and sends it to motor cortex

1. i.e., process information about the environment, such as distance and  position of objects

15. What functions and what kind of sensory information is the temporal lobe responsible  for?

1. Involved in hearing and the ability to recognise words

2. Perception of movement and face recognition

1. Damage to the left — problems remembering what people said

2. Damage to the right — difficulty recalling music or pictures 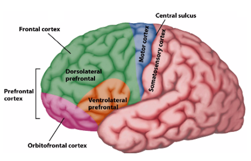 Place the structures in List I with the brain division they belong in.

Match the Functions/Descriptions in List II with the structures in List I (each can have more  than one answer and the answers can be used more than once. Some structures are  followed by No II; this means they do not have a match in List II.

- Important for formation of new  memories

a. First stop for sensory information

g. Connected to the hypothalamus

n. Where many axons cross from one side to the other  o. Controls movement

1. How are an MRI and an MEG different/similar?

2. How is an MRI and an fMRI different? Which one can look at the function of the brain  (versus only anatomy)?

1. fMRI is the mixture of MRI and PET, therefore, it is upgraded version of MRI.  2. Only fMRI can do it.

3. What is a negative aspect of PET scans.

- Averages across 1 min of activity

4. What are the ways researchers can manipulate an animal brain to study the function of  an area? How is this done in humans?

5. Name each technique and match it with how it works.

- Injects radioactive substance and measures brain  activity from gamma rays emitted by that  substance breaking down.

- Measures brain activity by looking at changes in  the oxygen level in your blood.

- Can tell us when and where activity is  occurring

- Anatomical map of the brain based on tissue  density

- Inject a dye and takes X-rays from all angles to  construct an image. Measures energy released in  response to a magnetic field.

1. What does it mean to say the brain is “plastic”?

2. At what age does the CNS begin to form in fetal development: Describe how the brain  forms and each stage of this process.

1. The production of nerve cells is called Neurogenesis

2. Cells that give rise to neurones and glia: precursors

1. Along the inner surface of neural tube 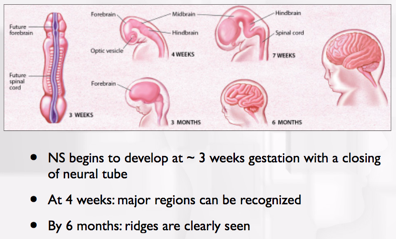 5. What two areas have neurones forming throughout your lifetime?

6. According to Sperry’s experiment, if axons are cut, which targets do they reconnect  with? How is it thought that an axon finds its target?

7. What determines if a neurone survives?

1. Neurotrophic factors: A chemical that acts as if it “feeds” certain neurones to help  them survive

2. Neurones that do not form functional synapses “commit suicide”

1. Cell death due to injury

9. What aspect of your neurones change in response to your experiences?

10. If the brain is unable to significantly grow new neurones, what are some examples of it  adapting?

1. Edema: The accumulation of fluid

1. Increases pressure on the brain and chance of new stroke

1. Increases concentration of Na inside the cell

1. Drugs that break down blood cloths for ischemia

3. Trying to save cells in penumbra - region surrounding immediate damage  1. Cooling the brain (33-36C) for few days can help

13. What is the reasoning for giving stroke patients stimulants?

1. Temporary loss of blood to a brain area

1. Ischemia: result of obstruction in artery

1. Most common type of stroke

2. Neurones flooded with blood and excess of chemicals

1. The regrowth of Axons

1. Damaged axons can sometimes grow back (crushed vs. cut)

15. What happens to a postsynaptic cell if it loses synaptic input?

17. How is recovery after damage based on learning?

1. Describe the parts of the eye and its connections to the brain.

2. Iris (colour of your eyes): controls how much light enters the pupil  1. Acs like shutter of the camera: contracts and expands depending on amount of  light

2. Pupil: Opening in the centre of the iris

3. Lens: focuses light on to the retina by changing shape (ciliary muscles)  4. Retina: contains the light receptors or photoreceptors

5. Optic nerve: carries impulses from the eye to the brain. Whenever this is  stimulated, the signal that goes to the brain is visual signals.

1. states that activity by a particular nerve always conveys the same type of  information to the brain

3. Explain how is the object in the visual field projected to retina.

1. left hits right side and right hits left side. Above hits bottom and bottom hits above.

4. Describe the visual route light takes within the retina.

1. Light is changed into neural energy in photoreceptors

2. light passes through ganglions cells and blah blah blah and pass everything and  hits rods and cons so that they can transduced to action potentials and gives  signals.

3. Route within the retina:

4. what is the visual processing of rods?

5. Describe the functional and anatomic differences between rods and cones.  1. Rods: most abundant in the periphery of the eye and respond to faint light (120  million / retina)

1. does not really have pigments

2. Thus, good colour vision in fovea but not periphery

3. very acute just because there is one and one relationship with the cells 4. Photopigments: chemicals in photoreceptors that release energy in response  to light

2. light converts it into all-trans-retinal

6. Describe why humans have a blind spot.

2. Light does not come inside this part, so we cannot see

1. 3 types of cones sensitive to different ranges of wavelength

2. The ratio of activity across the three types of cones determines the colour. 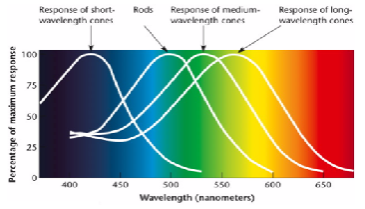 3. But the limitation is that incomplete theory of colour vision.

8. Describe what happens to the incoming axons at the optic chiasma  1. Optic Chiasma is where the nasal part crosses over and disperse.  1. Nasal parts: cross over

2. Temporal parts: do not cross over

8. Describe the concept of receptive fields and how they change from the retina to the  various areas of the visual cortex.

1. Receptive fields: part of visual field that excites/inhibits the cell

1. Photoreceptors: area of visual field from which light strikes that receptor  2. Other cells: determined by which receptors connected to it and by pattern of  their input

1. Thus, as we progress up the visual pathway receptive fields become larger..

9. Describe three types of ganglion cells and their functions.

1. Parvocellular: small with small receptive field, near or in fovea

1. Highly sensitive to colour and detail of stationary objects

1. Cells of the lateral geniculate nucleus (LGN) have a receptive field similar to  those of ganglion cells 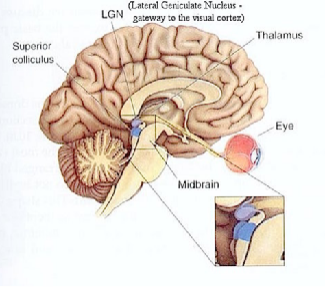 10. Describe the key functions of the major pathways in the visual cortex. (i.e., dorsal and  ventral streams).

11. What is the contributions of areas V1, V2, and inferior temporal cortex to shape  perception?

12. Describe the work of Hubel & Wiesel as it relates to simple and complex cells.

13. Describe the brain areas that process colour and motion.

1. Damage to “what” pathway

2. Recognition of other objects is normal

3. Lesions in the medial occipito-temproal region of the brain

1. Fusiform gyrus (or face area) win IT cortex — brain region specialised  for the processing of faces

1. Can see an object but fail to see that it is moving.

Why did the bretton woods collapse?

What does the us senate look out for?