How would the rate of reaction be changed if more cl2 was added to the following chemical 2 reaction?

Rate:​ the speed at which a chemical reaction proceeds.

How would the rate of reaction be changed if more Cl was added to the following chemical 2 reaction?

How does a catalyst effect collision geometry?

How would the rate of reaction be changed if the temperature decreased? 2P (s) + 5Cl (g) 2P (s) It decreases!! 2 → Cl5If you want to learn more check out What is matlab data?

Collision​ ​Theory:​ Reactant molecules must collide in order for a reaction to occur. They must collide with sufficient energy and correct geometry.

How does increasing reactant concentration increase the rate?

● Increasing temperature, increasing speed of particles, and increases collision frequency. ● Increasing temperature, increases energy, with which reactants collide increasing likelihood of collision with sufficient energy. Don't forget about the age old question of What is the definition of the trouble functions?
We also discuss several other topics like What is the meaning of hcl in chemistry?

How does a catalyst effect collision geometry?

Pairs are listen with acid first.

Acid / base differ by H+

What is the conjugate base of HCO ? 3−

What is the conjugate acid of HCO ? 3−

+ H+ If you want to learn more check out Who is martin french?

● A strong base strongly accepts H+

● A weak base weakly accepts H+ 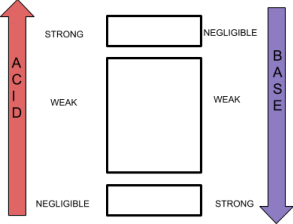 What is the strength relationship between conjugate acid/base pairs?

The weaker an acid, the stronger its conjugate base (and so on).

● Resistant to [H30+] / [OH-] changes, even when strong acid or strong base is added. ● Buffers must contain both a weak acid and weak base, conjugate pairs, in roughly equal amounts.

● Each end & each vertex represents a carbon atom.

● The hydrogen bonded to carbon are implied

An atom or a set of atoms bonded in a very specific way.

● Neutral (not acidic nor basic)

● Bond many monomers together to make a polymer

● The small “monomer” unit of proteins are amino acids.

-Proteins are polymers, also called polypeptides, that range in size but are usually composed of 50+ Amino Acids.

-Primary (1 degree) structure of a protein is the sequence of amino acids bonded together via peptide bonds.

-If we want to bond 2 Amino Acids together, we need to “make room” for new bonds.

Do nutrients dissolve in water?

How much volume will repetitive process need to handle?